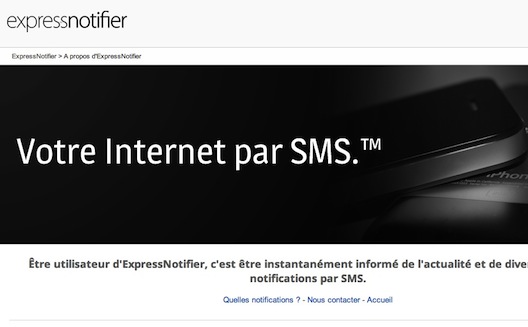 Algeria is not famous for its Internet. The country still doesn’t have 3G and is ranked 3rd worst in the world when it comes to upload speed, according to Netindex. This makes everything complicated, from following the news, to checking the weather or using Twitter.

When Twitter first launched, back in 2006, before the iPhone existed, it was based on sending tweets and receiving notifications via SMS. Yet, as Twitter evolved beyond being based around SMS, it never turned the SMS function on in Algeria. So, in 2011, Khaled Mouloudi, a computer science student at Alger University, decided to create a platform call TweetNotifier, which would allow users to receive Twitter notifications via SMS.

By January 2012, the service was a success among the small Algerian Twitter community, leading Mouloudi to rename it ExpressNotifier and expand it to include useful information like news, weather or emails. 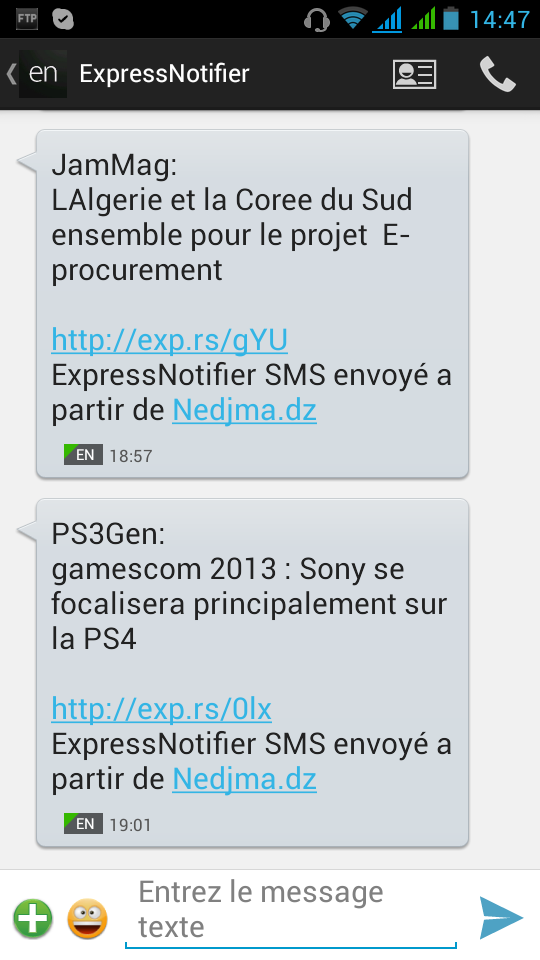 Users can add the websites or Twitter and email accounts they want to follow on ExpressNotifier, and can add filters to limit to the number of SMS they receive.

At the request of several users, Mouloudi has also opened the platform's API to let users use the service as they please. One fan uses the platform to receive task reminders throughout the day, while another one uses it to receive alerts when a TV show airs.

Mouloudi uses RSS feeds to aggregate content, and WebSMS to send the texts. WebSMS is a service that allows users to send an SMS to a number with the same carrier for free from the web, typically including a small ad from the carrier. This service is only available for Nedjma and Djezzy’s users – two of the three Algerian operators. The 11 million users of Mobilis will have to wait before they can use ExpressNotifier.

A long road ahead for this wannabe entrepreneur

For the moment, only 1,000 Algerians use the service, but Mouloudi, a computer science student, wants to move to the next stage. Within a few weeks, a new website will be launched, followed in a few months by a mobile app. At the same time, Mouloudi wants to turn his hobby into a professional activity.

First, he needs to create a company, a difficult mission that imvolves a lot of redtape and a less-than-efficient process, he says: “It’s a marathon, and I don’t like marathons. It has been sapping my motivation and delaying the launch of my company.”

Next, he will have to tackle marketing. So far, ExpressNotifier has only grown through word-of-mouth and some visibility at tech events like Algérie 2.0. Mouloudi dreams of seeing billboards advertising for ExpressNotifier; except for that, he doesn’t seem to have other ideas for advertising his service.

It’s a shame, because the service could achieve decent success if it managed to tap into Algeria's 35 million-strong market, where mobile penetration approaches 100%. Mouloudi had signed two partnerships with niche media - Jam Mag, a blog on startups and tech in Algeria, and Dyalna, a news aggregator – but those seem to offer limited visibility to the service. But what is ExpressNotifier waiting for in the search for more quality partnerships?

Of course, the startup's ultimate goal is to monetize the service. As soon as ExpressNotifier is an official company, Mouloudi won’t be able to use web SMS services, and he will have to pay for every text sent. However, he will be able to replace the carrier's ads with his own 35-character ads, reaching a targeted audience.

A regional market to tap into

If Mouloudi wants to convince companies to advertise on his website, he will have to raise his number of users. But that doesn’t necessarily mean he needs a huge marketing budget; he simply needs some creativity to boost the word-of-mouth, and good partnerships would help. But he’d have to be quick!

This is nothing new though. In India, U2opia reached 10 million users in only three years with a similar product. But they do have an advantage: they’re working hand in hand with Facebook, which offers more proof that partnerships are key.

Many countries in Algeria, the Middle East or Africa, still count on SMS to communicate. The regional market could be huge, should ExpressNotifier find ways to tackle it.