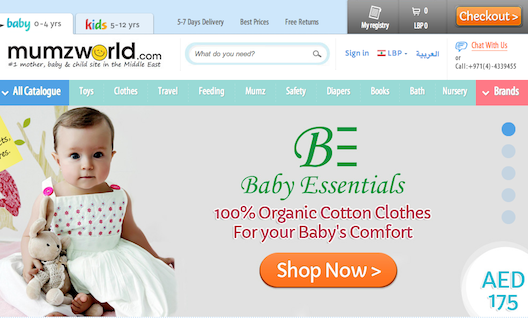 Mumzworld, the Dubai-based e-commerce portal for goods related to mothers, children, and babies, has announced that it’s open for a new round of investment, exclusively from women.

It's allocated a percentage of equity for the round that “could be filled by investment from one woman, or twenty,” says founder Mona Ataya, who launched the e-commerce platform in late 2011.

The round will be Mumzworld’s second since it raised a series A round in early 2012, from a few angel investors and Alghanim Industries in Kuwait; whether it will be part of a larger round, Ataya wouldn’t say (although she’s not generally known for being loquacious about company statistics).

Her ideal investor in this round, she says, is “a mother or a woman who wants to contribute to the region, who wants to feel empowered that she's doing something great for the region. [She's] what we call the ambassador mom, she’s not scared to speak up, to speak her mind; she understands the benefits and the risks of any investment and she's willing to ride that wave.”

Mumzworld also wouldn’t disclose the amount of equity or ticket sizes being sought; the amounts are available to interested parties who check out.

For Ataya, the idea of encouraging women to step up as angel investors is part of a personal mission.

When her first two children were born, who are twins, now 10 years old, Ataya took two years off; with her third, who is now six, she took four years off. “If I hadn’t been empowered as an investor in an organization, I wouldn’t have had that flexibility. And I wouldn’t have been able to start Mumzworld,” she says.

“We feel that we're really revolutionizing [options for women] in the region. It’s a very real need for a mother to feel that she's contributing [to society] but not compromising her children.”

Thus far, she says, since Mumzworld sent out the announcement earlier this week, Ataya says she’s been in “back to back” meetings with interested parties, most of whom are relatively experienced with investing or business in the region.

Should women invest? A look at the opportunity.

While Ataya won't reveal monthly revenues, she says the company has a loyal customer base. Over 45% of Mumzworld customers are repeats, and most buy an average of three to four times, she says. The business is also growing 50% quarter on quarter in its top line, and, while Ataya also won’t reveal an actual dollar amount, she says Mumzworld basket sizes are “40% above the average.”

At a mere 40 employees, the company is “lean,” yet it’s managed to expand throughout the Gulf, Lebanon, and Jordan, with offices in Jordan, Dubai, and Saudi.

Marketing to mothers has perhaps eased Mumzworld’s expansion, especially when entering the Saudi market, simply because women looking for items for their children have spent a long time researching exactly what they want to buy, Ataya explains. When their delivery arrives, they’re far less likely to send it back, even if they’ve chosen cash on delivery as their payment option (returns on unpaid COD orders can be deadly for e-commerce companies).

Ataya’s claim is backed up by estimates of Mumzworld’s traffic. For comparison, Alexa estimates that daily time on site at online retailer Souq.com is a healthy 7:50 minutes, with 6.62 pageviews per visitor, while fashion e-commerce site Namshi clocks in at 7:30 minutes and 7.30 pageviews.

The average daily time on site on Mumzworld? 64:10, with 60 pageviews per visitor. If this is even close to accurate, each woman who visits the site is spending over an hour obsessing over the items for sale.

And there are plenty of items to obsess over: Mumzworld boasts over 90,000 items, more than any other site in the region, says Ataya. “Exclusive contracts with certain suppliers” mean that 15,000 products are unique. “Most of our stuff just isn’t available here,” especially in Saudi Arabia, she says.

Mumworld may benefit from operating in a unqiue vertical, but it’s faced some basic e-commerce challenges.

She echoes the refrain that every e-commerce company in the region sings: competition is welcome, because it helps to educate a very young market about shopping online. Yet they’re problematic when they over-promise, take too long to deliver, and scare off customers from e-commerce completely.

Mumzworld, she says, consistently delivers within two to three days, thanks to a “customer-obsessed” approach, a fleet of around 20 messengers in the UAE, and a smaller fleet in Saudi Arabia. The company also relies on local couriers when orders exceed its bandwidth, but it tries to minimize outsourcing, as third-party carriers often disappoint, says Ataya.

Bringing delivery in-house makes a difference; at least six competitors have found logistics difficult enough that they are now simply working as storefronts on Mumzworld, she says.

Mumzworld also clearly obsesses about its customer acquisition strategy, enough that Ataya is tight-lipped about their approach. “I could tell you, but I'd have to shoot you,” she laughs. “We consider our marketing strategies for the mother to be one of our core unique selling propositions. It’s one of our secret recipes, and it’s allowed us to pick up momentum in this vertical.”

The site does partner with Cairo-based content portal Supermama, to lure in users with original blog posts. “They provide great content,” says Ataya. [Disclosure: Wamda Capital has invested in Supermama].

Secondly, pricing. Some of the items that Ataya wants to sell are priced locally in the UAE at four to five times the amount that they’re sold for abroad, she says. This puts Ataya in a bind; she would hope to feature the product at a globally competitive price, but, thanks to agreement with local suppliers, her hands are tied; she has to display the higher price.

To stay true to its values, Mumzworld often just pulls the items, no matter how well they sell. The company has to stick to its mission to “create intrinsic value for the mother,” says Ataya. “We’re not a mass player just trying to grow our top line.”

And with a new army of motivated female investors, Ataya hopes to leverage Mumzworld’s most knowledgeable critics to continue serving her customers. ‘This is from women, for women,” she says.