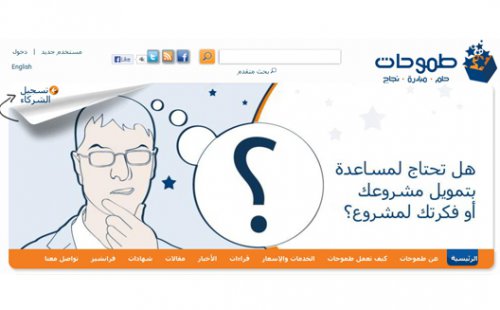 There's been no shortage of attempts to launch a viable, active angel network in the region; while the Arab Busines Angels Network closed, the SILA Angel Network, Tenmou in Bahrain, and Sirb in Saudi Arabia- among others- are working to unite and train angels in hopes of increasing startup investment in the region. Global programs like Angel's Den have also recently entered the region to offer entrepreneurs the chance to pitch to international investors at speed funding events.

While many programs have succeeded in collecting hopeful investors, facilitating investment is more difficult. One Egyptian entrepreneur is making headway, however, with Tomohat, a project launched in Saudi Arabia whose name means "ambitions" in Arabic. As of this August, the platform boasts 420 registered entrepreneurs and 270 investors offering a combined investment sum of US $250 million dollars.

Most of the projects registered on the platform are located in Saudi Arabia, followed by Egypt, the UAE, Lebanon, and Tunisia, and today, the platform has seen several success stories, including Modather in Egypt, and Nora Fashion in Jordan.

Yet when founder and CEO Mahmoud Nasr first launched the platform in late 2011, as an Arab version of other global online networking platforms like Go Big Network, Angel Investment Network, Go4Funding, gust, VC4Africa, it wasn't a case of "if you build it, they will come," he says.

"There’s a crisis of confidence,” says Nasr, who studied Computer and Information Sciences at Ain Shams University and worked at Microsoft Egypt before moving to Saudi Arabia. “We found that Arab investors need awareness about startups because they are skeptical by nature and always try to gather as much information as possible about their future partners before closing a deal. In other regions, all that investors care about is a financial guarantee. Here in the Arab world, they care about reputation too.”

That might be an exaggeration; investors around the world often care about a startup's team, reputation, and history as factors that influence its success. Yet, when Nasr saw that interactions on his site weren't leading to any investment deals, he took matters into his own hands, and contacted investors directly to break the ice.

Once he did that, deal flow improved:

Modather, a cement transportation company located in Damietta Governorate in Egypt, secured a US $5 million investment only three months after registering for the platform. Thanks to over 20 years of experience and good reputation, says Nasr, the company was able to find the right investor, a Saudi investment company, through private consulting provided by Tomohat.

Nora Fashion, a fashion e-commerce store, secured $400,000 in investment through the platform after project owner Ahmad El Sabbah found Tomohat by searching on Google. At first, he had doubts about the platform's seriousness, but once he registered, website admins contacted him, helped him develop a business plan, and gave him valuable advice. The e-fashion store was in fact able to attract more than one investor through Tomohat and is now in the process of closing another deal with a Saudi investor.

How the platform works

The matching process then begins: first, a company’s business plan is reviewed and improved. Next, founders pitch their company and receive feedback and an assessment of their performance. Finally, startups give a final presentation to an investor, and await the investor's decision.

The process might sound straightforward, but the revenue model took some iterating before Nasr settled on the right recipe.

“We reached the business model that we finally settled on after making several adjustments to the original concept," he says. "We had planned in the beginning to take our revenues from the investor and not the entrepreneur; then we decided to do it the other way around after we consulted business experts who told us that whoever needs the service is the one who should pay for it."

Thus far, this model has succeeded in covering the company’s expenses, and Nasr says that the company will start making profits via paid subscriptions by entrepreneurs and business owners and by taking 2.5% from every deal closed through Tomohat, or 5% equity in each startup upon the investment.

It will be a good test of the market to see if the platform can monetize via subscription; for $149 for six months, a Silver Package allows entrepreneurs to search the investors’ database and contact them directly (at a rate of 30 investors maximum per month), as well as to benefit from Tomohat's consulting. At the Gold tier, which runs $499 for six months, entrepreneurs also receive help from the Tomohat team in finding the right investor, developing their business plan, and pitching.

The free subscription, on the other hand, allows the subscriber to display his project’s data and receive messages from interested investors without being able to contact them.

The platform also provides support for non-profit entities to help them develop a plan of action and generate sustainable returns instead of depending solely on grants and donations.

For inspiration, Nasr keeps an eye on a similar U.S. platform, Go Big Network, to get an idea for where the platform could potentially go. In eleven years, Go Big Network has gathered around over 250,000 entrepreneurs and 25,000 investors who have offered more than US $12 million in investments.

Nasr is also staying close to the startup ecosystem, currently working on Egyptian startup 3A Capital, specializing in building mobile solutions for companies.

The Tomohat team still has a long, hard road ahead of it before it will reap success and before the online entrepreneur-investor interaction concept starts to take hold in the Arab world. Most investors in rhe events I’ve attended assert that the founder is more important than the idea itself because, even if the idea is innovative, its owner may not be the most capable.

These platforms might succeed in supporting projects that have a solid reputation, like Modather, the Egyptian cement company which has been around for twenty years, yet it's hardly a startup. And it may also offer good support for emerging sectors, like e-commerce and content for women, but investors will likely remain skeptical about new ideas pitched online until they actually meet an entrepreneur in person.