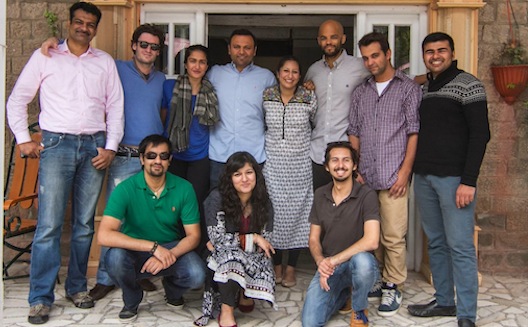 [Note:this photo is of i2i's first class of startups, which graduated this January].

When Plan9 began incubating its first class of startups, in November 2012, it was heralded as a welcome addition to Pakistan’s startup scene.

Backed by the Punjab Information Technology Board, a government entity, and supported by well-known advisors on the Lahore scene, including Wamda contributor Khurram Zafar, the CIO at the Lahore Stock Exchange, and Jehan Ara, the female President of the Pakistan Software Houses Association, among others. Plan9 incubated an impressive 14 companies in its first round, 10 of which survived its milestones over six months, five of which are still running.

Its most famous graduate is Eyedeus Labs, which develops “computer vision” technologies for mobile devices, to enable human-computer interaction and augmented reality. This summer, Eyedeus was accepted to BlackBox Connect, a two-week incubation program in Palo Alto that Egyptian startup Instabug also joined.

As Lahore’s Plan9 echoes the Y Combinator model that’s become so popular in the Arab world, Pakistan’s newest incubator is debuting a virtual model, looking to programs like the Unreasonable Institute, Artemisia, and Agora Partnerships, which offer startup training intensives or retreats.

Invest2 innovate, also know as i2i, has already incubated four socially-minded and green initiatives during its pilot from November 2012 to this January. This past weekend, it launched its first full incubation round, bringing together six startups from across Pakistan for their first weekend intensive. (no, its theme song is not viral hit Eye to Eye, by summer YouTube phenom Taher Shah).

Focusing on retreats rather than in-house incubation, i2i offers weekend intensives every three weeks, which provide mentorship, accounting and legal support, with Skype in the interim.

While it’s not as early stage as its fellow Lahore-based incubator, i2i is hosting one recent Plan9 graduate, and hoping to iron out a similar agreement with another incubator at the National University of Science and Technology (NUST). “We’ll look into how we can fasttrack applicants from other incubators into our pipeline,” explains i2i founder Kalsoom Lakhani.

The challenge of creating a financially viable virtual incubator

In the Arab world, diving into another round of incubation after graduation is usually only a tactic preferred by founders who come up with a completely new idea. Yet i2i is pitching itself as a new concept for startups distributed around the country. While its model began with one-to-one consulting, it’s now focusing on building a community to fill a large gap in the Pakistani ecosystem, says Lakhani.

Unlike Plan9, i2i not backed by the government, and unlike most incubators worldwide, it doesn’t take a specific portion of equity for its services, preferring to charge a flat fee and take an average of 3% equity.

Next year, however, the incubator will look to raise a fund and become financially viable. It will still focus on putting socially-minded startups first, says Lakhani, avoiding narrow metrics of success. “The number one thing that our startups say that they got out of our training was the learning and the mentorship. That kind of education is a much bigger metric of success than whether they received investment or not,” she says.

However, completely forgoing investment as a measure of success won’t help the ecosystem if follow-on funding is, in fact, scarce. While i2i might be available to fund Plan9 graduates, angels and VCs will have to invest in i2i’s graduates if the ecosystem is to provide viable opportunities for startups to evolve in the market and not just in training sessions.

Lakhani’s point holds water in the Arab world, however; simply receiving follow-on funding from an angel certainly does not guarantee that a startup will scale successfully. If an incubator hasn't helped the startup find good product-market fit, all of the angel investment in the world won’t make it sustainable.

For i2i, this second round of startups will be its test, as the next four months prove whether their models are ready for local, regional, or global markets. Thus far, the ideas don’t stray from most of what entrepreneurs are building in the Arab world, but a pharmaceutical vetting company and a health food bar might bring something completely new to Pakistan’s young startup scene.

Entaly, founded by Mustafa Saeed, aims to gamify online learning paradigms to make learning and education a more fun, engaging and personalized experience. With tailored game dynamics, the startup hopes to effect the lives of the masses by offered the same education that earlier could only be accessed by a few.

The Reading Room Project, founded by Mashall Chaudhri, looks to serve the nearly 25 million children who are denied the right to an education, and the 65% of children aged 5-16 who cannot read a simple story in any language. The project will give low-income Pakistani schoolchildren access to excellent learning resources via the internet in a supportive environment.

Odd Jobber, built by Adnan Khawaja, will be a matchmaking job platform for low income, low-skilled workers, using phone calls and SMS to help job seekers reach the mainstream market. It will be designed to serve those who works in jobs with frequent transactions, such as taxi drivers, domestic workers, cooks, and construction workers.

NutriNysa, founded by Junaid Malik, will create Rais’n d’Bar, an organic, all-natural and fair-trade energy bar made with the ingredients sourced directly from farmers in the Gilgit-Baltistan region at fair-trade prices. A lifestyle brand, it will target urban demographics ranging from corporate employees, health conscious people, weight watchers and physically active youth.

Asli Goli, built by Saim Siddiqui, is an SMS-based pharmaceutical product verification service for consumers, that uses unique serial numbers printed on the product to combat the glut of counterfeit products in the Pakistani market. One of its ultimate goals is to enable the Pakistani pharmaceutical industry to resume exports to the EU.

Amal Academy, founded by Benje Williams, will work to develop professional and life skills amongst the youth in Pakistan, in order to empower underprivileged students to realize their professional dreams. By bridging the gap that exists between the education system and soft skills needed in the market, Amal Academy  hopes to train students in low-income schools, reaching 100,000 disadvanatged students within 9 years.