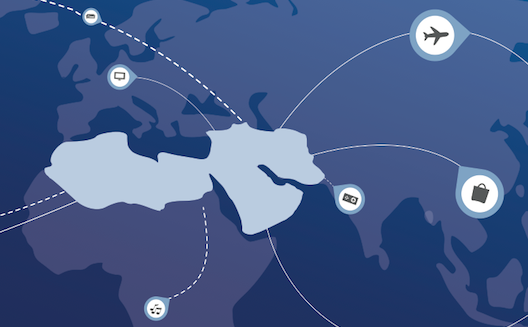 The idea that mobile is the future of e-commerce isn’t new, but it may surprise some to learn that shoppers in the Gulf already prefer smartphones to computers or tablets when shopping outside their homes.

According to a new study by PayPal released today, focusing on the UAE, Saudi Arabia, and Qatar, shopping on mobile is exploding in the region.

Mobile transactions already represent 10% of e-commerce (a level similar to the rest of the world), but they are set to reach close to 20% of transactions in the Middle East by 2015, as the m-commerce market grows from 1.3 billion this year to 3 billion by 2015.

Revelations about mobile are just part of the comprehensive report, which surveyed 1811 shoppers, 511 from the UAE and 800 from Saudi Arabia, and another 500 from Qatar, making it one of the largest e-commerce surveys to be conducted in the region.

While e-commerce companies still struggle with a variety of challenges, from customer trust to reliable logistics, the report estimates that 30 million people are now shopping online in the Middle East, up 65% from 2011, and that the e-commerce market is set to grow from US $11.2 billion today to US $15 billion by 2015.

A significant amount of that spending will be due to m-commerce (US $700 million in Saudi, US $100 million in Qatar, and US $1.5 billion in the UAE, the latter mostly driven by tablet adoption). 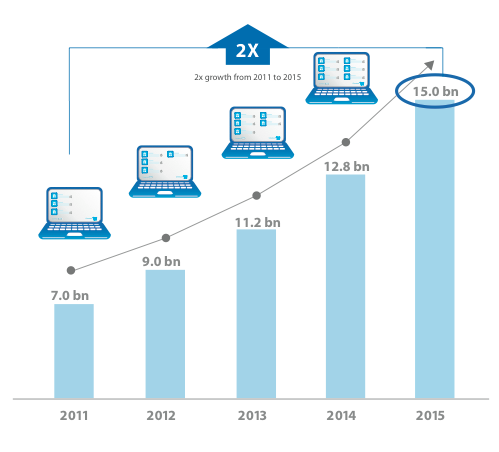 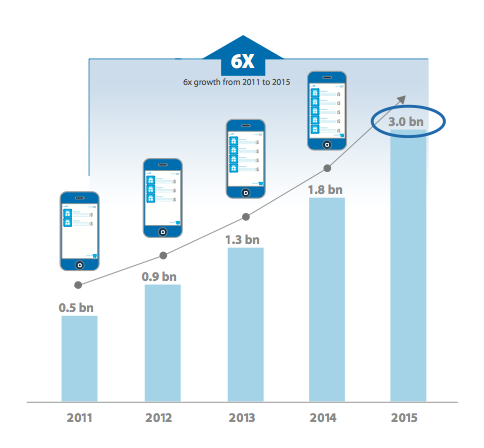 Where are people shopping?

Interestingly, most of these shoppers are not spending at companies based in the Arab world; the majority of online shopping is done in the US (35%); Asia (30%) and Europe (25%), with the Arab world accounting for 10% of e-trade.

Yet the report also reveals that 52% of those surveyed in the UAE shop at Souq.com, although percentages aren’t revealed for other e-commerce sites.

Most of those polled said that they prefer online to offline shopping thanks to convenience (26%), lower prices (18%), and product variety (15%).

The opportunity in travel

Another major trend the report reveals is that travel is the most lucrative e-commerce segment, with consumers spending an average of $1,521 per year.

The next largest segments are consumer electronics ($250 per consumer per year), computers ($248), jewellery and watchers ($222), and event tickets ($201). Ironically, given the recent boom in fashion e-commerce sites, fashion and accessories are at the bottom of the list, at $107. 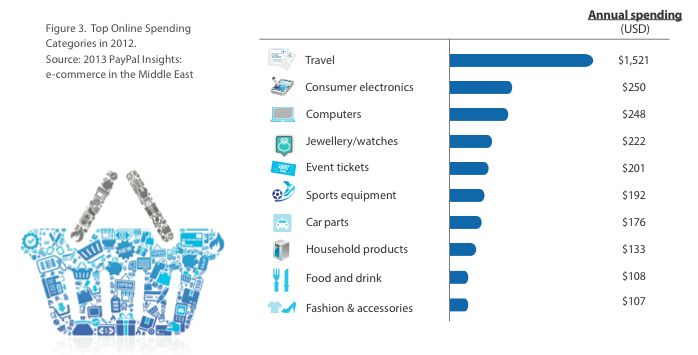 The report also touches upon the challenges of Cash on Delivery (COD), which represents more than 80% of online purchases, followed by cards at 15% and PayPal at 5%. 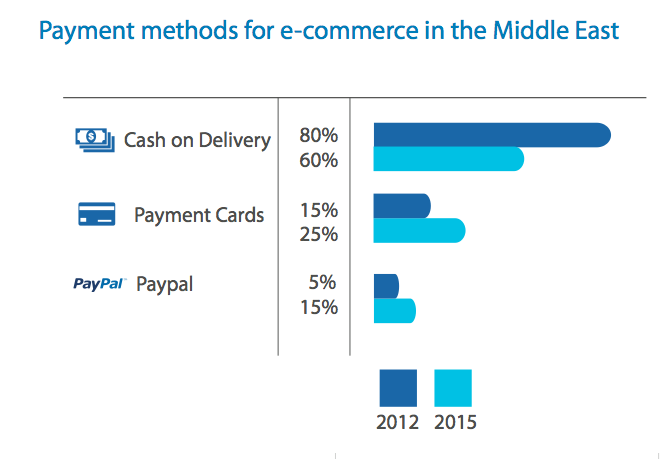 Yet by 2015, use of COD will have shrunk to 60% of all orders, while payment card use (including both credit cards and prepaid cards) will grow to 25%, and use of PayPal will grow to 15%.

Concerns about security may remain the biggest challenge to bringing more shoppers online; today, 40% cite it as a primary concern. PayPal, of course, is working to reduce that fear by building trust; throughout the report, the company reveals its plan for a mobile wallet, and alternative payment systems that will circumvent COD.

Those looking to expand m-commerce on their platforms should, the report says, enhance their user interfaces (an obvious point), and use coupons (although flash sales sites and daily deals are already discounted, the implication is that "coupon" means a discount specifically for using one's mobile). One third of those polled in Qatar, 25% of those in the UAE, and 33% of those in Saudi said that they would shop on mobile more often if they had a coupon or monetary incentive to do so. Do you agree?