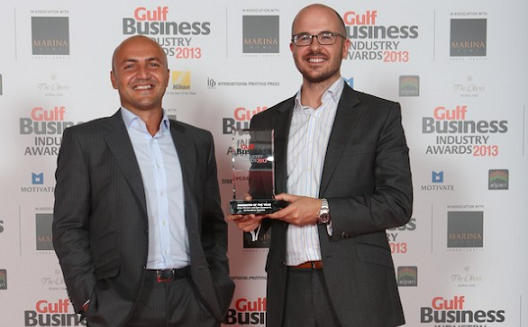 The ceremony, which was held for the first time last year, recognizes the leading companies in the UAE, across sectors including banking, marketing and real estate. This year's awards were divided into three main categories: Companies of the Year, CEOs of the Year, Special Individual Winners. The panel of judges included Ibrahim Al Ansari, CEO of Dubai First, Husam Hourani, Managing Partner at Al Tamimi, Y.S Shashidhar, Managing Director of Frost and Sullivan’s and Peter Cooper, editor and publisher at ArabianMoney.

Here's a look at this year's winners:

1- Companies of the Year

The Media and Marketing Company of the Year was given to MBC Group, a satellite broadcasting company in the Arab world which launched in London back in 1991.

The IT/Technology Company of the Year was given to Souq.com, a leading e-commerce website in the Middle East.

Energy Company of the Year was given to Dubai Electricity and Water Authority (DEWA), a governmental organization that delivers water and electricity services.

Tourism and Hospitality Company of the Year was given to Dubai Department of Tourism and Commerce Marketing (DTCM). DTCM, which was founded in January 1997, aims at attracting tourists and investments to the UAE.

Retail Company of the Year was given to Majid Al Futtaim Properties, a company that develops, owns and manages shopping malls in the region. It has 16 operational malls across the MENA region and 11 hotels.

Education Company of the Year was given to GEMS Education, an international k-12 education company which was established 50 years ago to provide high quality education in schools as well as consulting services for the public and private sector.

IT/Technology CEO of the Year was given to Ronaldo Mouchawar, CEO of Souq.com. Mouchawar is also the Vice President of Jabbar Internet Group and has 15 years of experience in technology and business management.

Energy CEO of the Year was given to Saeed Mohammed Al Tayer, CEO of DEWA. He joined the company in 1998 and has 23 years of experience in the field of telecommunication.

Tourism and Hospitality CEO of the Year is for Helal Al Marri, the Director General of Dubai Department of Tourism and Commerce Marketing. Al Marri worked previously at Mckinsey & Co, a global consulting firm as well as in KMPG in London.

Retail CEO of the Year was given to Yussuffali M.A, the founder of Lulu Group International, who is listed number 974 on the Forbes billionaires’ list.

Education CEO of the Year was given to Dr. Fred Moavenzadeh, the head of Masdar Institute of Science and Technology, a university that provides solutions to sustainability issues. Moavenzadeh has been the president since July 2010 and served as a consultant on the Advisory Committee of several institutional agencies, such as the World Bank, United National Industrial Development Organization and others.

Real Estate CEO of the Year was given to Hussain Sajwani, the founder and chairman at DAMAC. Sajwani founded the company in 2002.

Aviation CEO of the Year was given to Paul Griffiths, CEO at Dubai Airports, one of the stars of the local and international aviation scene.

Banking CEO of the year was granted to Andre Sayegh, CEO of First Gulf Bank, who has over 33 years of experience in banking financial services and has worked previously with leading regional financial institutions inckuding Citibank.

Innovator of the week was given to Chris Thomas and Sam Quawsami, co-founders of Eureeca. “We are extremely honored to receive this outstanding Gulf Business Industry Award and to be named Innovator of the Year as voted by the readers’ choice,” said Quawasmi in a press release, “The credibility of winning such a prestigious industry award is a remarkable success for Eureeca and we’d like to personally thank everyone for their support.”

Entrepreneur of the Year was given to Fadi Malas, CEO of Just Falafel, a restaurant chain in Abu Dhabi specialized in Falafel.

Businesswomen of the Year was given to Salma Hareb, CEO of Jebel Ali Free Zone (JAFZA), who is the head behind the operations of one of Dubai’s busiest free zones and she has also helped establish successful free zones around the world, including hubs in Dijbouti, Shanghai, India and Southern Carolina.

Special CSR Award to Abraaj Group, an investment company in the UAE which was founded in 2002 and has been operating in many markets in Asia, Africa, Latin America and the Middle East.

Lifetime achievement of the Year for Khalaf Al Habtoor, founder and chairman of Al Habtoor Group.

UAE Company of the Year was given to Emirates Airlines.