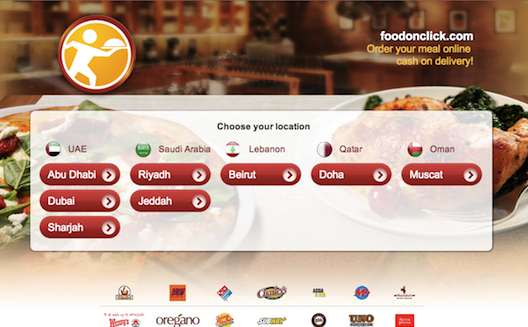 Who will own online food delivery in Saudi Arabia? With Foodonclick, the Arab arm of Turkish giant Yemeksepeti, announcing expansion into Saudi Arabia and Lebanon yesterday, on the heels of Rocket Internet property HelloFood's announcement of U.S. $8 million in investment through iMENA and expansion beyond Saudi, Morocco and Jordan, the online ordering sector is heating up this year.

FoodonClick, which launched in the Middle East market in 2010, has gained some good traction, now boasting a decent 100,000 subscribers, with over 1,000 partner restaurants and over 3,000 food orders daily, in the UAE; it also operates in Qatar and Oman. (Disclosure: MENA Venture Investments, which shares management resources with Wamda Capital, has invested in FoodOnClick).

Expansion into Saudi Arabia and Lebanon was a predictable move for the company, as we discussed back in April, as Saudi is one of the biggest markets in the Arab world, and Lebanon one of the rare markets that has a delivery culture but no existing, functional online food delivery platform.

Foodonclick will face different challenges in those two countries; in Lebanon, it will have to deal with a lack of infrastructure and, likely, market understanding, but could put its experience and its first-mover advantage to good use.

In Saudi Arabia, however, it will face heavy competition. They will not only face the heavily-funded new-comer HelloFood but also Kuwait’s popular Talabat and Egypt’s Otlob, both of which are leading the Saudi market, at least in term of overall traffic on their websites, despite not having big funding (although as always, that's not a measure of purchases or conversions, and it's difficult to parse traffic in Saudi from aggregate numbers, HelloFood is ranked as the 4,283th most popular site in Saudi, while, Otlob is 1,474th, and Talabat is ranked 1,399th, according to Alexa).

Still, Hellofood seems to be Foodonclick's main competitor as it looks very similar to the Turkish platform, mimicking its website design, features, services, and even restaurants. Both work to give partner restaurants visibility, data, and a more streamlined ordering process.

So what will set Foodonclick apart, as it faces formidable competitors that HelloFood hasn't yet surpassed, despite its budget?

Gokhan Akan, founder of Foodonclick, told Wamda that the company's primary strength is its 13 years of experience in online food ordering, under Yemeksepeti, which brings "a lot of know how," and its focus on customer service and mobile- through which the company receives 25%-30% of its orders. This allows Foodonclick to position itself "very close to the customer," he says.

Although Akan wouldn't go into much detail about what that means, he promised that the website would debut new features soon, adding that staying on top of technological developments is “the best way to compete is to serve the customer in the best possible way.” This, of course, has to be proven, as their website says they offer phone and chat customer support, but I couldn’t find where.

As it could have been expected, Foodonclick doesn't welcome the comparisons to HelloFood (HelloFood might not relish a rivalry either). Akan concluded our interview by saying, confidently, “Our way to compete is to give the best possible service. We're not going to build a strategy around HelloFood or any other competitor. We have the funding and will to perform well in [the Middle East and North Africa].” Now, we all know that it’s not necessarily the features that count but the execution. Let the games begin.