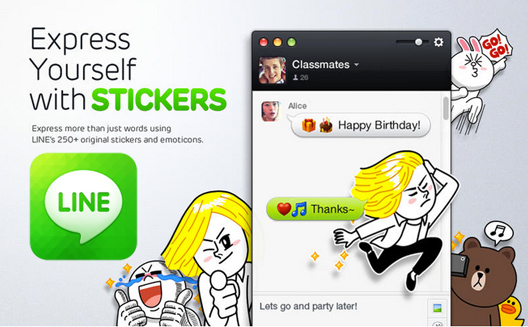 While the tech world is hotly anticipating Twitter's IPO, which could happen before the end of the year at a valuation of around $16 billion, another communications startup is set to dominate the tech world before 2013 closes: Japanese mobile communication app LINE, which is reportedly valued at around $28 billion.

LINE is a text messaging service that offers voice calls and group chats, which has skyrocketed to 200 million registered users since its launch in 2011. Although it's younger than Twitter (founded in 2006) and Whatsapp (founded in 2009), it's on their heels; WhatsApp has 300 million users, Twitter only 218.3 million, Quartz reports.

But the messaging app won't go public until it surpasses competitor Whatsapp's current size. “LINE would be able to issue the initial public offering when the firm secures a stable number of users, say, over 300 million,” said Hwang In-joon, CFO of NHN, the holding company of LINE Corp, told The Korea Herald.

To pass that threshold, the company will use aggressive marketing tactics in North America and Europe markets this year, In-joon said, pointing to the United States, Japan and Korea as its major future markets.

Currently, LINE is used by only 1% of U.S. smartphone users (compared to Whatsapp's 9%), but what makes LINE a strong candidate for global domination is that it offers a bouquet of today's most popular social networking features: an activity timeline (like Facebook or Twitter), an instant messaging tool that allows both video and audio (like Viber, Whatsapp, and BBM), group chats (like Palringo), and a freemium voice over IP VOIP product like Skype. If its quality is decent, it could eat market share from all of the above.

Another aspect that sets LINE apart is its revenue stream. Thus far, the app has been able to monetize by selling both virtual goods and offline merchandise. Users can pay to pepper their messages with fun big emoticons or “stickers,” that look like Manga characters and can take up half of a screen. Texters also gone crazy for plush toys, t-shirts, and other merchandise portraying these emoticon characters.

Both sources of revenue have been wildly popular in the Asian market, especially virtual goods. The company recorded $132 million in revenue in Q2 2013, and each month it makes over $10 million from the sale of sticker packs and $27 million from gaming apps. LINE has made a total of $40 million in revenue to date, primarily from Japan, from offline commerce.

Another market where LINE could be a hit is the Arab region.

Here, smartphone penetration is some of the highest in the world, hitting around 60% of the population in the UAE and 62% in Saudi Arabia. Mobile messaging applications are becoming a default means of communication, especially given the high cost of SMS, and the regional need for international communication.

As the company is not planning on entering the Middle East yet, its offline revenue stream could work well in this part of the world. Offline goods, toys and even clothing with, for example, Angry Birds logos are very popular and can be found at every Virgin store and almost in all small bookstores and gadget stores. Students, kids, and even adults are snapping up themed t-shirts and even school stationery.

Selling virtual goods, however, could be trickier. Gaming companies in this region still have difficulties monetizing with in-app purchases. Mobile transactions represent a fraction of e-commerce (a shy 10%), although m-commerce market grows from 1.3 billion this year to 3 billion by 2015. In 2011, the the Middle East and Africa accounted for only 10% of worldwide virtual goods purchases.

Yet, as mentioned, the app will have a ways to go before dominating the market. When I took a quick poll, few in our immediate circle at Wamda- or my tech-savvy friends- had heard of it. Still, it ranks as the 14th most popular app in Lebanon. So someone must be using it.

I first heard of LINE after accidentally seeing it on a relative's smartphone. When I asked her about it, she raved about the quality. "The line is much clearer than Viber, the application is more reliable as it crashes much less. I first heard of it through my niece living in Dubai and now all the family is using it to stay in touch with her," says Hoda, a Lebanese journalist who works in a news agency. "Great thing about it, is that we can chat with her on the PC, not only through the smartphone," Hoda added.

In Lebanon, that's as good a reason as any to check it out.