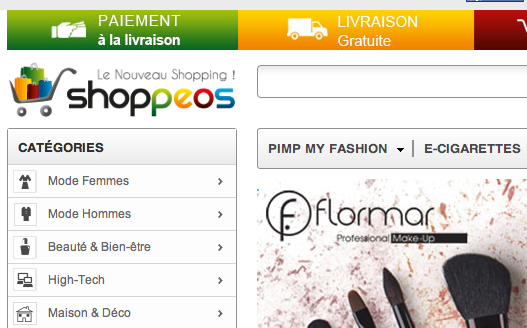 In Morocco, e-commerce is booming; online sales increased by 45% in 2012. This boom can partly be explain by the launch, in June 2012, of two websites that stormed the market: Hmall.ma, Morocco's answer to eBay, and Jumia, the Africa-centric Rocket Internet Amazon clone.

Is it too late to enter the market? Azran Group doesn’t think so. The 35-year-old textile company now hopes to make its new e-commerce site Shoppeos the market leader. Saad Khaled, in charge of e-marketing, says “we’re aware of Jumia's influence and we’re ready.”

This might seem ambitious, especially as the Azran group, which manages 160 franchises from Diesel to Dim, and 100 brick-and-mortar points of sale, had never operated on the web until recently. Now, the group sells everything from beauty products, decorations, electronics, to medicine, and even fine food – all online.

But the three founding brothers seem to know what they’re doing. Their aim is not to revolutionize the model but to make things more efficient. After two years of preparation and tests, they've launched Shoppeos with the will to win.

Because none of the founding brothers knew anything about the web, they decided to experiment discreetly, to gain experience without using the group name to protect it from their potential newbies' mistakes until they were ready. They launched a web development agency two years ago, to create websites for companies they knew.

They also developped two websites for them to manage: Fashion Avenue, a website offering imported women outfits and accessories, that were NOT part of their franchises, and Bouquets.ma, a more innovative website for ordering fruit packages in Casablanca.

They've found the experiment successful as they acquired the experience they sought. With Bouquets.ma, they learned the challenges of customer service and the importance of making the service available in different cities; with Fashion Avenue, they learned more about Moroccans expectations in terms of e-commerce.

Bouquets.ma has now changed to an only-B2B solution, and Fashion Avenue attracts 15,000 visitors per day (it will be incorporated into Shoppeos).

According to the three brothers, Moroccans are unsatisfied with many aspects of Hmall and Jumia; it's by addressing those dissatisfactions that they're hoping to win them over. Their strategy relies on four points: exclusivity, identity, superior logistics, and innovation.

Shoppeos' main advantage is their offer; it's the only website Morrocans can go on to buy the 160 brands the Azran Group distributes. But their exclusivity deals don't stop at their franchices; Shoppeos CEO Ken Azran says that some brands that have, up to now, refused to go online, have joined Shoppeos because they trust the group.

The second characteristic they hope to build on is a distinct brand identity. The website wants to build an “out-of-the-ordinary marketing and ad strategy.” But can a website that sells everything from electronic cigarettes to lingerie find a unique brand identity?

As with any e-commerce site, delivery is crucial. Currently, Shoppeos offers free delivery for purchases over 399 DAM ($48 USD). In Casablanca, orders will be shipped directly from the warehouse, and shipped less than four hours after a purchase is made; in the other Moroccan cities, orders will be delivered within 48 hours via Aramex and other delivery services. Clients can also go to the Azran Group's hundreds of outlets to collect (and pay) their orders.

Finally, the group proudly highlights some "innovations" they're bringing to the Moroccan e-commerce, basically offline services they're the first to offer online, like deferred payment, customized clothing items, and the ability to recharge your phone credit. Will these small improvements make the difference?

From offline to online

To achieve their goals, the group and its team of 30 rely on some expected techniques, such as community management on social networks, ad campaigns on social media and targeted websites, and a “viral campaign” Khaled wanted to keep secret to preserve the surprise aspect.

The group also wants to be present offline, thanks to street-marketing campaigns (think flyers and car rounds). In a country where only 39% of the population has an internet subscribtion, it's essential to recruit customers who have never shopped online before. Will a street-marketing campaign be enough to enter the market when even small startups like MesCadeaux.ma rent billboards, and massive players like Avito,the famous online classified ads website, play commercials on TV?

It'd better; The Azran brothers have big ambitions. Once they’ll have conquered the Moroccan market, they plan on expanding to Egypt and Nigeria.