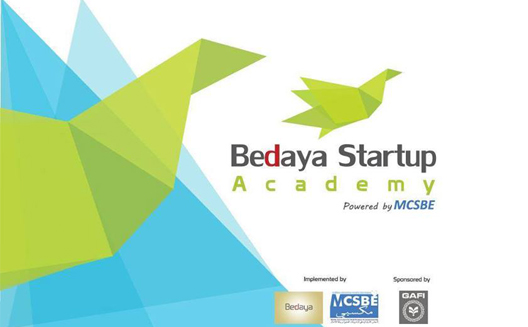 Bedaya Startup Academy is one of the few entrepreneurship training program existing outside the academic sphere in Egypt, providing hands-on training that fits entrepreneurs’ fast-paced lifestyles. It is also the first formal agreement to be signed between the Ministry of Investment and a civil association for the benefit of the entrepreneurship community.

Bedaya is also the first Egyptian program to be backed by the General Authority for Investment and has been implemented in collaboration with Bedaya Center for Entrepreneurship and SME Development, as well as the Middle East Council for Small Business and Entrepreneurship (MCSBE), the organizer of Startup Cup Cairo.

Given that the academy doesn’t have a website yet and that all the available information about it fits on two subpages on the MCSBE and General Authority for Investment websites, its organizers decided to hold two promotional events this month, the first in affiliation with Mercy Corps and the second with Nahdet El Mahrousa Association. Both were held in downtown Cairo.

Resources like Bedaya are increasingly important, given the growing number of entrepreneurs in Egypt combined with the absence of well-defined resources to support them. Even the incubators and accelerators that do exist sometimes require a large amount of equity, making independent success and profit hard to come by. Since beginner entrepreneurs with little or no experience have limited options, often resorting to incubators and accelerators seems like the only option.

The Academy’s sessions are designed to host full teams, preferably with 3 to 5 members. The subscription amounting to EGP 3,000 ($420 USD), but the General Authority for Investment has pledged to pay half of the amount on behalf of each team.

When asked about the business model that the academy has chosen to adopt, MCSBE’s program manager, Tamer Saad ElDin told Wamda that the program’s fees only cover the educational materials, and that the trainers are not paid any money since the purpose of the academy is to support entrepreneurs.

The academy will be accepting applications until the end of October, after which the three-month program will begin. At the end of the course, participants showcase their projects to angel and other investors.

For acceptance, the academy requires that applicants have an economically viable idea, that the team is serious and capable of turning the idea into a project, and that the team members have varied backgrounds.

Applications can be accessed here.