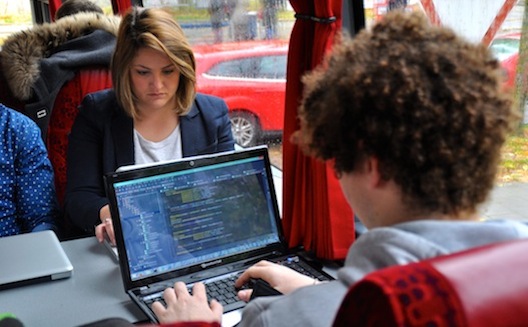 A week ago, I ventured off on a special roadtrip: StartupBus Europe, a trans-European 3 day-long hackathon on wheels. In the first installment, I explained how participants spend their first week building teams and pivoting. In the second one, I shared a few valuables tips a major Swiss investor gave the French bus at Google Zurich. Today, I give the mic to the participants.

It's October 30, and there's only one day left before the big finale. The French buspreneurs are working on their presentation in Munich-based coworking space Werk1 along with their fellow German buspreneurs. Werk1 looked exactly how you might imagine it: an industrial space refurbished with minimalistic taste.

In the afternoon, both buses move to a second coworking space – Wayra, a coworking spaces chain that spans Europe and South America – to join the Dutch and the English bus. The very strong European vibe and the pressure of a deadline, seems to stimulate both teams.

Finally, the semi-finale kicks off and not a single project is alike. Participants pitched companies including a social network app, a metrics SaaS, a file-sharing and communication tool for teams, and even an app to help unmotivated user find inspiration in their life.

The French bus’s startups saw some big success. Of the five awardees, two were French: SizeMe, an e-commerce widget helping users order the right size depending on their measurements, was one of the two startups to be selected for the finale, while SocialFoods, a local food donation platform, was runnerup.

Whatever their results in the semi-finale, everyone was in the mood for celebration. While tasting some Bavarian specialties, participants from across the continent mingled, and let off some steam.

Learn what you're capable of 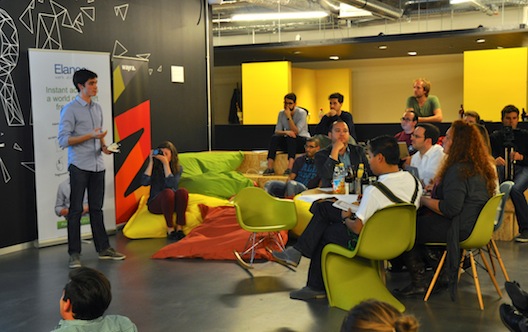 For most, this hackathon, being as intense as it was, helped participants to learn a lot about themselves. "It’s a learning accelerator,” explains one participant who was making his first steps in the startup world. “It made me want to go for it. I’ve been wanting to do my startup but was afraid I wouldn’t have what it takes; now I feel ready for it.”

This rolling hackathon, more than most other creative experiences, demands a lot from its participants. “It’s like getting slapped across the face all day long, explained one participant just after his intense one-on-one mentorship session with Jordi Montserrat. "You realize being an entrepreneur means questioning yourself non-stop,” he said. It also means having to deal with things that unexpectedly go wrong all the time. After dealing with poor internet on the bus, a total lack of sleep, and the usual team issues, he’s convinced he can now circumvent any problems his startup will encounter in the future and, despite the intense questioning, is now more motivated than ever to start his company.

"You learn about yourself, about what you can do, and what you have to work on. All this self discovery makes you realize, the limit is the sky,” said one young entrepreneur hoping to build his idea in the next few months.

Accelerate your startup with immediate feedback

For one participant, like so many others, StartupBus was a way to test his idea, receive lots of feedback and meet new people and partners.

For another, who had already launched his startup, the program was a way to improve his pitching skills; by the end of the trip, he had pitched his startup seven times. Each time he pitched to a different audience, with different rules, which was a great exercise in flexibility and thinking on the spot.

Every participant, be they a new comer or a seasoned entrepreneur, each agreed that StartupBus was a great way to network. 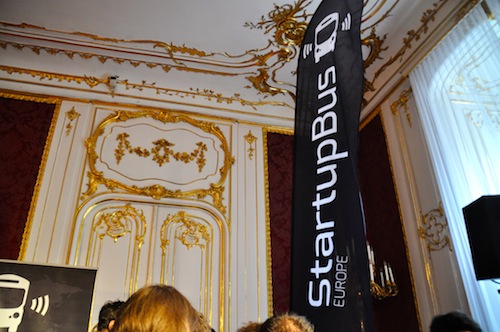 For one, entrepreneurs gained access to the Pioneers Festival, in the breath-taking Hofburg palace, one of the major tech events in Europe. This is the kind of event young entrepreneurs usually can’t afford, but the eight finalist teams got the chance to pitch before, or be introduced to, investors.

After cheering for their friends, the 18 other teams were able to attend the talks and workshops and to chat with investors and major industry experts from all over Europe. And at least one of the French participants scheduled a follow-up meeting with an investor.

But, according to this entrepreneur, this wasn’t even his biggest achievement; this trip, and the friendships he built with his fellow buspreneurs, are worth a thousand business cards, he says. Some entrepreneurs even found possible co-founders and developers on the bus.

StartupBus has a leveling effect. Everyone, no matter where they come from or what previous experience they had, is placed at the same level and many remarked that they felt like they had so much more to learn by the end.

For one participant, learning to keep a balanced pace was his key takeaway. “You shouldn’t underestimate your need to sleep, and should respect a certain schedule when it comes to food.” He adds that a startup team should be be balanced too: “It’s better to have at least two developers so that they can question each other.”

As one designer on the bus remarked: “You can pivot a project but not fix a team. Finding a team you like is more important than finding a project you want to pursue.”

After a very full and intense three days on a bus, and the final day at the Pioneers Festival, every single participant was wiped out, but many entrepreneurs are already thinking of doing it all over again. Maybe they'll take part in the Europe competition again, or they’ll head to Africa; the first African edition is starting in 2 weeks.