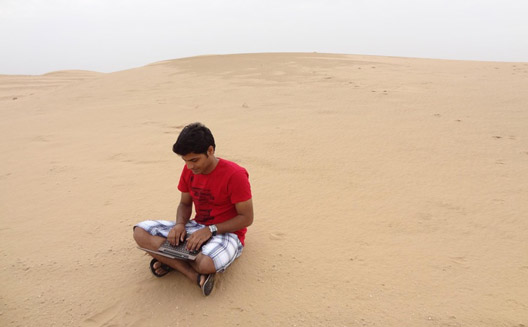 “As we move into 2014, work is no longer a place, it’s something you do wherever inspiration strikes,” says Johnny Karam, regional vice president for the Middle East and Africa at Citrix, the cloud computing company. To keep up with the changing times, companies in the Middle East will have to acclimate to this new environment, where employees can work wherever and whenever they are able to perform and innovate.

In this regard, Citrix revealed four predictions for how the technology market in the region will look in the new year:

1. Organizations and companies will adopt remote working and collaboration strategies. As 2013 concludes, the topic of work hours flexibility has been igniting a controversy among executives in the region. It is expected that this controversy will continue through out the upcoming year, but management will give employees more freedom to work when and where they choose.

2. The future is all about apps. Mobile and tablet apps have recently been flourishing at an incredible rate. With so many success stories, technology startups in the Middle East are increasingly interested in the app market. Smartphone and tablet app development is expected to grow in the new year, allowing access to data from anywhere.

3. Mobile traffic will eclipse wired traffic. Numbers indicate that people are increasingly using mobile phones rather than personal computers to browse the internet. Mobile phones and tablets accounted for one fourth of total internet traffic for the year 2012. In the new year, companies will be supporting more mobile operating systems. Currently, Android is the most popular mobile operating system in the workplace, supported at 72% of companies, followed by iOS, which 54% of workplaces support.

4. Bring your own device to work. Many companies in the region now allow employees to use their personal smartphones and tablets for work related tasks, but security concerns prevent them from extending the same lenience to personal laptops. In the new year, more companies will implement plans for bringing your own laptops, in addition to mobile devices, to work. Further, the “corporate-owned, personally enabled” model will gain traction, allowing employees to use business devices for personal use.