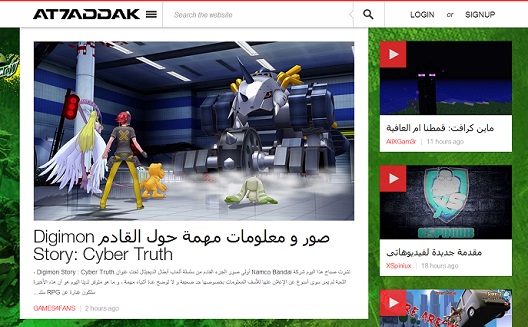 As I drove up to the town of Mansourieh overlooking sprawling Beirut, I wondered how such a successful online company could operate in such a small town. But online gaming platform At7addak.com (which means “I challenge you” in Arabic), with 600,000 active users, eight million monthly page views, and 500 contributing writers from Morocco to Iraq, is killing it.

Since its launch in 2011, founders Brahms Chouity, Abdulaziz Al Faisal and Samer Istambouli have worked to meet the demand of Arabic-speaking gamers through an evolving online platform that has attracted the attention of major international gaming companies such as EA and Activision. The idea for At7addak was born when Chouity, after working successfully in a variety of industries, including hospitality, finance, and motorsports, decided to turn his gaming hobby into a business.

The founders first hosted a group of the region’s most promising gaming startups at a booth at Arabnet Beirut in 2011, which helped them gain clout even before their platform was completed.

After Arabnet, the founders first created a simple leaderboard platform whereby gamers on different platforms (PlayStation, Xbox, and PC) could compete against each other and see their scores against players on any platform. “At the time, it was the only online automated gaming recording software in the world,” explains Chouity. Previously, players could only play against people on their own platform.

The swift popularity of the platform attracted the attention of EA and Activision who sponsored At7addak to host two of the region’s largest gaming events. The first, the Call of Duty: Black Ops Tournament in Beirut, brought over 500 gamers and 5,000 spectators together in 2011 to compete for $10,000 USD in prizes. Then, in 2012, they hosted an EA official Battlefield 3 Online Tournament, which featured 1,000,000 Saudi riyals (around $266,000 USD) in prizes.

While these popular online and offline events certainly raised At7addak's profile, Chouity admits that they didn’t make very much money; partners mostly paid in sponsorships and prizes. They realized that the platform needed some rethinking to become profitable.

With international partnerships secured and regional credibility on the rise, the team next decided to pivot into a market that has proven profitable: global gaming news and content. At7addak hired a few key team members to author and edit articles in Arabic. Chouity explains that while the team occasionally reviews games from the Arab world, the vast majority of content is about international or Western titles.

But things didn’t really pick up until the team changed its strategy to sourcing user-generated content just three months ago. Chouity says that there are somewhere between 500 and 1,000 YouTube Arabic channels that focus on gaming in the region, with more than six million subscribers between them – but most aren’t making money. At7addak created a platform that brings many of these content creators together to both monetize At7addak and help these YouTube personalities make money for themselves.

“So we told them, listen, instead of working on your own, come to At7addak, put your platform on At7addak and share your articles and videos and we’ll give you a cut of the advertising revenue,” says Chouity. Now, he adds, one of their contributors, or partners, a 16 year-old in rural Morocco, makes over $500 USD a month just by playing video games and sharing his reviews on At7addak.

Since the launch of this new model in September, At7addak has 500 regular contributors who create around 100 new articles a day based on popular video game titles. The team’s editors then approve each piece and make sure that there is a good balance between platforms and games.

With a vast majority of users from Saudi Arabia and the Gulf (80%), around 95% of At7addak’s articles are in Arabic. Contributors have creative license to make videos or written pieces for any game or gaming news they find interesting, but if there is something that needs quick coverage, the At7addak team will either write it in-house or ask a contributor to review it.

As these contributors gain more followers, many are becoming regional gaming celebrities. At7addak is working to harness their popularity into a few creative advertising campaigns for brands targeting the region. Recently, they flew five of the region’s most popular gamers to Lebanon to film a funny promotional video for the release of Call of Duty: Ghosts which you can see below:

After turning a profit for the first time this year, the team is now focused on developing creative advertising strategies, like having gamers drink a certain brand of soda while being filmed for a review video. Chouity expects to see over $3 million USD in revenues in 2014 as they unleash a new Arab Gaming League to capture the excitement built by the leaderboards and offline events.

“Now that we’re actually making money, we can dedicate a lot of cool things, like massive events, big leaderboards, and big prizes because everybody is nostalgic about the gaming days,” he says.

But on top of building the gaming platform, perhaps the most exciting upcoming development for At7addak is the expected launch of 11 other content portals based on the same contributor-generated model. These will dive into fashion, sports, motorsports, technology and lifestyle, among others, explains Chouity. “At7addak today is not only about gaming,” he adds. “What we’ve built is a technology, a user-generated platform where somebody can come in, create their own article or video, post it and make money.”

For now, they plan to do it all without seeking investment, but as the platform and their team growth needs are put to the test, At7addak may need to look to investors to help grow at the rate they hope to in 2014.

While the team will certainly run into competition in each field, At7addak’s dominance in gaming among an increasingly-crowded field shows that content “for Arabs, by Arabs,” as Chouity says, has huge potential to create some of the most interesting and viewed content, from fresh voices around the region.