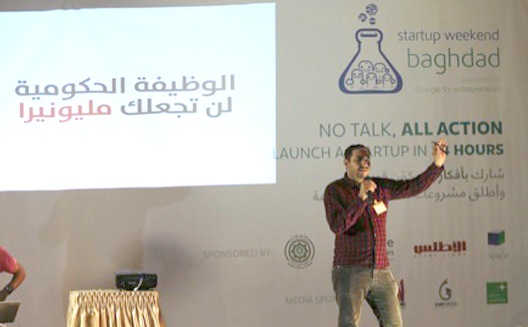 Editor's note: When it comes to the startup scene in Iraq, we haven't seen a lot of activity, although opportunities are growing, at Fikra Space, the hackerspace launched by the same team that helped found Lamba Labs in Lebanon, and we've also spoken to startups who are growing in Erbil. Here's a look at the next generation of startups launching at Startup Weekend Baghdad this last weekend, written by organizer Ali Mohammed.

Today, entrepreneurs in Iraq are facing many challenges, from a lack of incubators to support and mentor them, to limited funding options, which often pushes them to take bank loans with high interests. But since the Iraqi startup ecosystem is still nascent, these challenges are likely to improves as the number of startups grows.

In the context of helping to grow that ecosystem, and give startups in the Iraqi capital a chance compete in an international entrepreneurial battle, Startup Weekend Baghdad brought 50 young Iraqis together last weekend, at the University of Baghdad's College of Science for Women, for 54 hours of team building, prototyping, and pitching.

The event, the second edition of Startup Weekend in Baghad, was planned and organized within two weeks by a group of young volunteers, most of whom were members of Fikra Space, the first hacker space and community in Iraq.

Over the weekend, 23 ideas were pitched, and 12 were chosen by teams, which assembled on the spot. Although the event was smaller than the first SW Baghdad, which took place in July, the projects pitched were valuable with good potential.

To give the teams a boost, one of the winners from the first SW BAghdad, Saad Al-Mo'men, gave a quick talk during the event, sharing his insights on the challenges he faced with his team while working on his idea.

The three winning projects were all focused on technology:

First prize was awarded to Smart Wall, an interactive wall that can be used on a Kinect device and supports interactive applications. This project also won the prize for best technical work.

Second prize went to Dress Me, an application that allows shoppers to try on outfits from retail outlets virtually, thanks to a photo editing tool.

Third prize was for Study Board, a website that will help young college graduates find scholarships and opportunities for studying abroad at foreign universities.

Other interesting projects included E-Taxi, a taxi ordering application, which won a prize for the best prototype. A prize for the greatest potential for success went to Easy Liber, a digital platform designed to facilitate communication between students, teachers and parents.