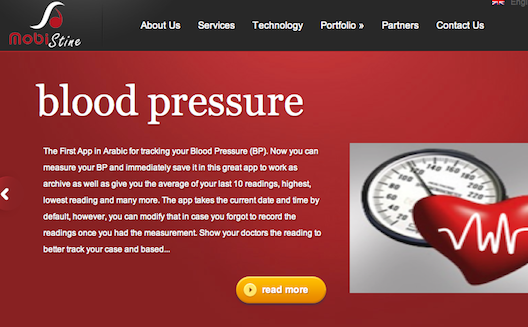 At the end of October 2013, Husni Abu Samrah returned to Palestine after spending five months in the United States. He had just completed a stint at Mass Challenge, the largest – and perhaps most prestigious – startup accelerator in the world based in Boston, Massachusetts. After spending his time in Boston fine tuning the business model for MobiStine, the startup he founded in Palestine in 2011, he says the company is around two months away from launching the first Arabic language app that will connect pregnant women and new parents to healthcare and lifestyle information and services.

Abu Samrah has been active in the Palestinian IT world for 17 years. After starting his career with a tech company in Nablus, he worked his way up to through several firms to be a business development director at NextLevel Technology and Systems (NTS).

While at NTS, Abu Samrah founded a mobile development department in the company. “I saw the opportunity that this is going to be the future,” he says.

Inspired by this work, Abu Samrah moved on from NTS, launching his own startup allowing him to focus full time on developing mobile apps for the Arab market. Market research showed him that there were few Arabic language apps with content about healthcare. He thought his company could fill that niche.

Since 2011, MobiStine has developed around 30 apps, providing content and services for health issues from breast cancer to blood pressure. The company has also produced lifestyle apps that help users keep track of expenses, diet, and exercise.

Collectively, MobiStine’s apps have more than 1.5 million downloads. Some of the apps are among the most downloaded healthcare apps in the Arab world, particularly in Saudi Arabia and other Gulf countries.

In the past three years, Abu Samrah has also participated in a number of startup incubators and workshops in the Arab world and abroad. His program at Mass Challenge, which helped Abu Samrah combine his previous experience into a concept for a flagship app that will be a one stop shop for expecting and new parents, is the latest of these.

A One Stop Shop

Today, as more Arab couples are living away from family support networks, Abu Samrah explains, parents need new ways to get knowledge about family planning, nutrition, exercise, infant care, and other issues related to parenthood that used to be passed on in person from their parents and extended families.

MobiStine’s new app, which is still in development, is designed to do just this. “Everything related to new parents and pregnant women, [users] can have it through this application,” Abu Samrah emphasizes.

The app includes modules to remind pregnant women when to take medication, help keep track of their blood pressure, record the growth of their burgeoning bellies, and provide information about best pregnancy practices. It also connects users to doctors, insurance providers, and shops specializing in items for pregnant mothers and infants.

A major benefit of the app, Abu Samrah says, is that it was designed using feedback from users as well as input from medical professionals. Users will be able to continue providing feedback, helping the app continue to develop for their benefit.

Once it is launched, the application will be available for free to anyone, an important component to Abu Samrah. This will make useful and reliable health information accessible to those who don’t have credit cards, as well as those who can’t afford to spend money on apps. What’s important to Abu Samrah is that good information gets into the hands of as many new parents as possible.

The app will generate revenue from advertisements and sponsorships. Pharmacies, childcare companies, and others will pay to advertise on the app, he hopes, because “we are going to be the shortest path… to their customers.” MobiStine is already generating revenue in this way from its other applications.

The app will be marketed to the Arab world, but Abu Samrah expects users from elsewhere to download it as well. Twenty percent of MobiStine’s downloads come from the United States, he says. This is because Arabic language speakers all over the world are looking for healthcare information that they can understand, and that is culturally relevant.

To gear up for launch, MobiStine is working on creating partnerships with healthcare ecosystems, such as hospitals, insurance providers, pharmacies and doctors, in countries where the app will be used. Abu Samrah is expecting that these ecosystems will help market the app once it is launched because it will be beneficial for them as well.

For now, Abu Samrah says, “We have a vision to be a well known address for trusted healthcare information.” But don’t expect MobiStine to stop at healthcare; Abu Samrah says we can expect more apps from them in the future, addressing a variety of issues.