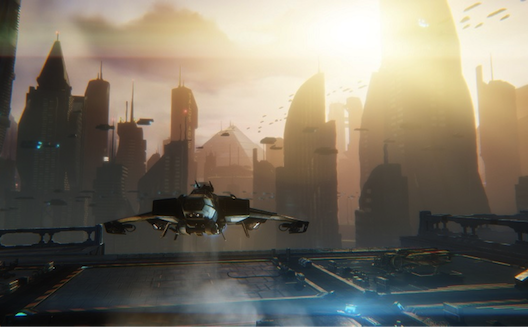 Continuing its streak as the most successful crowdfunding campaign to date, upcoming PC game Star Citizen has just passed the $38 million USD funding mark. While people often tout the success of new hardware, wearables, or celebrity movies as the coolest Kickstarter campaigns, some of the most successful projects have actually been in the gaming space.

Roberts Space Industries’ Star Citizen, which is expected to fully roll out over the course of 2014, was actually crowdfunded on two platforms: on Kickstarter they raised over $2.1 million USD, and they raised another $36 million on their own website. While the model represents a sort of perfect storm of high quality developers, well-known producers, a huge fanbase, and MMORPG gameplay, it still offers some valuable lessons for future campaigners. The project uniquely places the reach and functions of the game in the hands of backers, who can unlock new abilities, worlds, and spacecrafts if the community reaches a certain funding level, which has steadily grown since the end of 2012.

I’ve written previously about the reasons why developers should consider crowdfunding their games, but it’s also important to look at the ‘how’. Kickstarter’s second-largest campaign was a game system as well: OUYA raised nearly $8.6 million USD as a new Android-based console that lets developers create games to list on the private OUYA store. While the console itself hasn’t been a game changer, the success of the campaign gave it the proof of concept necessary to make it a success.

So what makes a crowdfunding campaign in the gaming realm successful? Here are a few tips for your next creation:

Choose the right platform. While Kickstarter is the most popular crowdfunding platform, and sees some of the highest returns for campaign organizers, Indiegogo comes in a close second. Kickstarter focuses on an all-or-nothing model that creates a sense of urgency that Indiegogo, with its more flexible model, doesn’t. The latter allows for flexible funding that is donated even if the target amount isn’t reached. In the Arab world, Zoomaal is the newest crowdfunding platform to hit the market; while it usually sees smaller campaigns, it does support specifically Arab-developed projects through multiple payment gateways. (Click here for a closer look at the two major competitors.) Of course, if you have the resources you can follow Star Citizen and make your own crowdfunding landing page.

Make it familiar but unique. While your game should of course never be a copy of any other, the gameplay should follow some familiar functions, like a skills tree or quest storyline, to keep the game both exciting and accessible. Likewise, your campaign should borrow successful features of funded projects with things such as a smart pricing structure, desirable rewards, and engaging intro videos, but should also highlight what makes your game worth investing in or donating to in particular.

Prove why you’re the right person / team to develop this game. Apart from selling your title’s awesome gameplay, you also need to market yourself. Why is this the right time for this game, and why are you the person to develop it? Through your text and video, show your audience what qualifies you to introduce this game; make them realize that this chance may not come again.

Make your backers feel like they are a part of the team. Rewards are key for this component. Star Citizen has been successful because it offers backers awesome in-game rewards for their money and makes the development of new worlds and ships dependent upon reaching funding milestones. At the $39 million mark for example, Roberts Space Industries will unveil the Kabal and Oretani star systems. When your backers realize that it’s up to them for the game to become more advanced or expansive, they are more excited to sign on. For more on their next funding milestone, click here.

Price rewards carefully. As much as the campaign is about displaying the attributes of your game, it’s also a sales pitch and some careful pricing is in order. If you look at the pricing structure of successful campaigns, they often have a set price that may seem a bit high, paired with another reward that’s just a few dollars more with a lot more perks – making the jump not seem all that serious. Offer some in-game benefits to entice backers to join in the fun.

Set a realistic target. Perhaps the most important step is to set a realistic target. While $500,000 USD may be a good amount for a PC-based MMO, your mobile, browser, or social game may not need to aim that high. If you’re able to deliver in a reasonable timeframe and offer awesome rewards, people are going to back your project. If you need $100,000 USD just to finish the first step of development, people may not be excited to join in as the game still has a long way to go. Know what you’re capable of and be honest about where you can go with crowdfunding. If you need an exorbitant amount to build a small title, it may be time to reevaluate your game, but the success of your crowdfunding campaign will be the ultimate proof of concept.

As Star Citizen looks to reach the $40 million USD mark, other campaigns are also attracting a lot of backers to smaller titles. Here are a few examples of up-and-comers to take a look at or even back yourself