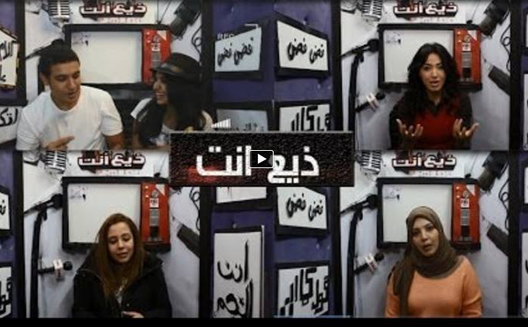 In 2012, a channel called Mosireen launched on YouTube, which publishes videos shot from the heart of various socio-political events happening in Egypt. Mosireen started its work as a non-profit cooperative for independent media personnel in Cairo, and in a short period of time managed to become the most famous nonprofit YouTube channel in the world working in civil journalism, which allowed its team to expand its activities to include training across governorates and villages.

Within this context, the Egyptian startup PMC decided to reshape this concept in its own way. Its YouTube channel Zee3 Enta (‘Be The Presenter’ in English) provides an opportunity for ordinary citizens to express their dreams, aspirations, and visions, in a public forum so as to make it easy for officials to listen (if they choose to).

Sherif Hosni and Marwan Yunis first launched their idea in the form of social ads on YouTube, inspired by the events of the January Revolution. “We noticed the importance of advertising awareness in Egypt, and so we prepared videos about the importance of fighting sectarianism and donating blood for the injured… and the importance of participating in the elections by voting, and supporting peaceful demonstrations. We drew wide local attention right from the first ad we published, which attracted around 200,000 views,” says Hosni.

Hosni and Yunis are passionate about social awareness; through their videos, they seek to present the community with its problems and then offer it solutions. Sherif believes that this is precisely what Egypt needs, given the country’s successive violent periods since the beginning of the revolution.

After PMC achieved its initial popularity, the team launched Zee3 Enta  about two years ago. The program comprises short episodes (an average of seven minutes each), in which citizens address political, social, realistic, or fictional topics of their choice. The recorded episodes are then broadcasted on YouTube.

The crew takes its portable booth all over suburbs and governorates to host citizens from as many different regions as possible. Zee3 Enta addresses all groups of society, and draws a large segment of internet users. It has so far shot episodes featuring a security guard, a former prime minister, as well as artists, teenagers, farmers, and many others.

While Zee3 Enta exists on new media, its founders have relied on more traditional media to popularize their YouTube channel. Hosni uses on social media networks like Facebook to spread the word about Zee3 Enta, and the biggest and best-known local newspapers in Egypt have also dedicated various articles to the idea and its evolution. Also, Hosni's participation in the Egyptian Al Mashru' show on the An-Nahar satellite channels also helped market the project.

Zee3 Enta continues to face numerous obstacles. “We had some financial issues at the beginning to the point that we were about to completely stop our activities… but we ended receiving sponsorship for one year from Edita Food Industries in return for e-marketing the company's products,” explains Hosni.

Hosni is waiting to secure a new contract in order to launch the next stage of Zee3 Enta, allowing citizens to record their stories from anywhere, a project for which he’s already carried out the development and pilot stages. He is currently in negotiations with a number of Egyptian satellite channels, (which ones he refused to say), which are seeking to obtain the exclusive broadcasting rights of the show's episodes.

Eventually, Hosni plans to take Zee3 Enta to other regional countries to allow Arab citizens of all nationalities to share their concerns and demands.