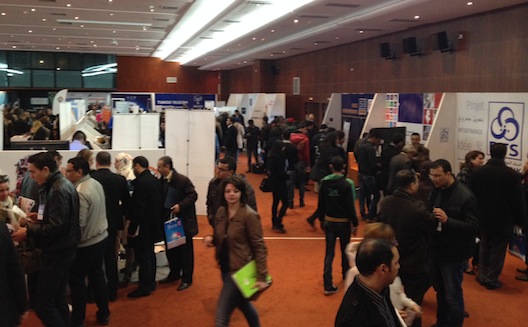 The many challenges facing entrepreneurs in Tunisia did not prevent Tunisians from turning out in droves to the very first Entrepreneurship Fair in Tunis, on March 4th and 5th. 3500 visitors, from entrepreneurs to the curious, descended on the Tunisian Union for Industry, Commerce and Handicrafts (UTICA) headquarters to meet the 60 exhibitors and take part in 20 conferences on entrepreneurship.

“Tunisia has the best legislation and mentoring structures [in place for people interested in starting a business]. But there appears to be a lack of communication, information, and awareness. An entrepreneurial spirit should be instilled in the minds of young people (and their parents) who remain misinformed” about what it means to be an entrepreneur, explains Skandar Haddar, the fair’s organizer and the managing director of Tunisie Place de Marché, a company that specializes in the organization of fairs and development of business-to-business (B2B) online marketplaces.

A lack of information in the region

Awareness is one of the goals of the United Nations Industrial Development Organization (UNIDO), according to representatives stationed at a booth. UNIDO aims to create “success stories” in the region, with a view of raising awareness among youths allowing them to become active agents of change, explains Akrem Haddad, the coordinator, by conducting contests for the best ideas, business plan contests, and training on entrepreneurship via e-learning modules, among other activities.

It is in Tunisia’s interior that this lack of information is particularly noticeable. For this reason, future iterations of the fair will take place here; the next one is scheduled for October in Kairouan.

There was strong participation from banks other financial institutions (like SICARs, private equity companies set up under the auspices of specialized Luxembourgian law) during this entrepreneurship fair. But these actors have little interest in innovative projects, says Alia Mahmoud, director of Microsoft Innovation Center. “Bankers working with SICARs do not embrace the spirit of venture capital. They do not know how to evaluate a risky project. We need a college for venture capitalists!”, she laughed. The SICAR DIVA may be an exception, though; its leaders told me that they may invest up to 2 million Tunisian dinars (over $1.2 million USD) in high-potential projects.

Another major issue covered at this fair was mentoring. The Réseau Entreprendre Tunis, partner to the fair, offers selected entrepreneurs a two year mentorship program, in addition to an interest-free ‘honor loan’. The largest stand at the fair was manned by the Microsoft Innovation Center (MIC), which has  sponsored exciting new Tunisian startups since 2007. The Center invited its ten successful candidates – Global Soft Net, Eblyn Labs, Famissima, Tunilab, Medass, Business Connector (creator of e-devis.tn), Green TIC, Linkao, Contact Centers Services, and Disrupt CK – to participate in the fair free of charge.

First and foremost, this sponsorship makes it possible for startups to benefit from the association with Microsoft, says the team behind Global Soft Net (which is now funded by SICAR DIVA, and exports its debt recovery software abroad). Startups like e-devis.tn insist on other tangible benefits from involvement with the MIC, such as business-oriented trainings and technical support, as well as meeting space made available at the heart of the El Ghazala technological park.

Among other participants was the Education for Employment (EFE), a new international NGO whose mission is to mentor unemployed youth, teaching them how to execute ideas and draft business plans, as well as the Women’s Enterprise for Sustainability (WES), which is engaged in raising women’s awareness of entrepreneurship and providing training.