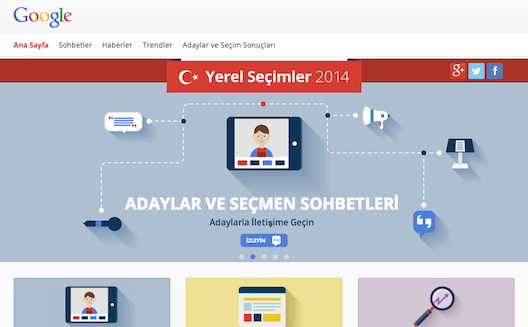 eSpace, the Alexandria-based software developer juggernaut that partnered with the Egyptian government to create elections.eg to help facilitate elections in Egypt, has now turned its attention to Turkey. The company, in partnership with Google, has set up a site in anticipation of the Turkish house elections, scheduled for 30 March.

The platform, called Yerel Seçimler or ‘Local Elections’ in English, is similar to its Egyptian counterpart, eSpace representative Mohamed Sanad told me, in that it provides information on a Google platform regarding candidates, parties, and results, for example which candidates are up for election in specific regions, their party affiliations and stances, to voters in one consolidated location. After the elections, the site will feature results in an interactive map. The portal elections.eg has helped facilitate every Egyptian election and referendum since the January 2011 revolution.

But unlike the platform they built in Egypt, the Turkish platform is more of a research tool than an interactive platform for voters. In Egypt, users are able to enter their ID numbers either on the site or via a mobile device and be directed – via written instructions or “an exact map location” for people who can’t read – to their polling location. But in Turkey, the eSpace team was unable to access information regarding voting locations, so they ended up building a less interactive portal.

Despite the idiosyncrasies of the different platforms, it seems that bringing elections online is an idea whose time has come worldwide. In Egypt, eSpace has led the movement. Internet penetration in Egypt has skyrocketed since the 2011 revolution, in which social media played an undeniable role, and Egyptians’ increasing digital literacy is evident in eSpace’s statistics.

“In the last constitutional referendum that took place [in] 15 January 2014 we had 4.5 million monthly visits and 2.5 million monthly unique visitors, peaking at 1.1 million daily visits on the first date of the referendum and… 15,000 concurrent users,” Sanad writes. “Our overall API hits for all parliamentary elections, presidential elections, and constitutional referendums are around 165 million.”

The eSpace goal to enable and maximize citizen participation is evident not only in its elections platforms, but in its philosophy as well. The team’s “belief,” as Sanad puts it, in open source tools allows their platforms to be community projects, wherein employees and developers can tweak programs and site features to fit community needs exactly based on user feedback. Open source allows adjustment to be made immediately, without having to wait for the response of a bureaucratic software company – a similar backend setup to Facebook, as well as to Google itself.

eSpace has also been working on cajoling the Egyptian government into allowing online voting. “The main issue in Egypt,” Sanad reports, “is that everybody with a specific ID [denoting place of birth] has to go to one place” to vote. Not only do people have to wait in line for sometimes hours to vote, “it would be really hard to vote if someone can’t get to their specific location,” Sanad says. He says eSpace has been trying to convince the Egyptian government to allow voting online, which he’s confident eSpace can facilitate, but until now the decision makers have been skeptical.

In any case, Sanad is hopeful for the potential for eSpace’s elections platforms to have a positive impact for Turkey’s future as well as Egypt’s. “We’ve [already] had an impact, in making things easier for voters,” he says. “I believe having information online makes things easier.” It’s a simple truth that regional players are slowly beginning to accept.