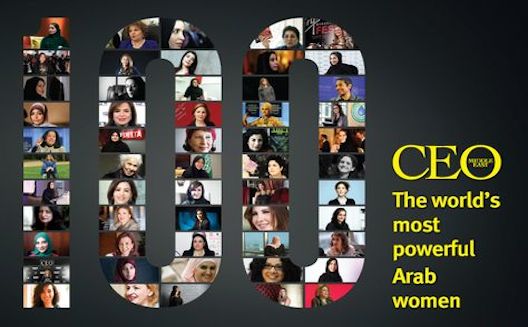 It doesn’t come as a surprise that for the fourth year in a row UAE’s first ever female minister, HE Sheikha Lubna Al Qassimi, tops the CEO Middle East list of The World’s 100 Most Powerful Arab Women.

Perhaps it should also come as no surprise that the number of women entrepreneurs on the list is still low. Out of the 100 listed women, around 15 are categorized as entrepreneurs, founders, or co-founders; some 25 are CEOs, chairpersons or presidents and the rest divided between artists, journalists, editors, authors, activists, directors, and managers.

Emiratis and Saudis dominate the list, with 24 and 16 entrants, respectively. Saudi director Haifa Mansour follows Sheikha Lubna, whose film Wajda, about a rebel girl dreaming of a bicycle in the Wahhabi Kingdom, won a double award at the recent Dubai Film Festival.

The list also featured old time divas, such as Lebanese singer Fayruz who came in at 58th.

To some of these women, power is reflected by their high governmental positions, reporting, broadcasting, filmmaking, writing, artist performance, or activism. Others have made use of technology startups to make a difference.

Many women leaders in tech startups were featured for the first time, like Mona Ataya founder and CEO of e-commerce platform mummzworld who came in at 95th; Aya Bdeir, 39th, the creator of LittleBits and founder of Karaj, Beirut’s first non-profit lab for experimental arts, architecture, and tech; and Abeer Abu Ghaith, 53rd, founder of StayLinked, an interface between Palestinian freelancers and businesses from all over the world.

Hind Hobeika, Lebanese entrepreneur and founder of Instabeat, a device that seamlessly tracks a swimmer’s heart rate, caloric burn, and number of laps, who came in number 76 in the list, says that being powerful to her means running a business with an impact in a certain community. “As the founder of Instabeat I have the power to make a difference in the swimming community,” she says.

Lebanese entrepreneur Reine Abbas of Wixel Studios, who was named one of the five most powerful women in gaming by Inc.com last year, came in number 63. For her, “being able to penetrate and succeed in the video game industry as a woman is proof of power for me,” she says.

Abbas is planning to use her skills to make the lives of the next generation of women developers easier, in addition to making a change in socially challenging situations. “I want to create video games with a social impact for deprived children and children with cancer,” she says.

Raising awareness about the importance of raising boys and girls equally is also a goal she wants to get to through her games developing ‘power’.

Wamda’s own Egyptian contributor, Hanan Solayman, came in at 37th as the founder of El Mandara, a news blog that Solayman says she wants to be the “voice of the voiceless” in Egypt. “Local media is the key to driving change in Egypt; from small local communities, strong independent media that grows unbiased will help in forming the Egypt we all hope for,” she says.

Despite the unstable situation in Egypt, Solayman is making sure her process of growing El Mandara includes an effort to end the current status quo wherein Egyptians’ voices in the south of the country go unheard. “Power is also about giving the oppressed like young local journalists with great potential an opportunity to study, get training, and work,” Solayman says.

To the same ends, Muna Abu Sulayman who sits on the board of Glowork, a recruitment platform for Saudi women, and the host of one of Saudi’s best known TV shows, believes in the power of social media. “I immediately post anything I find interesting on my channels because I want people to have the knowledge that I have, and the feedback I get is a humongous reward,” Abu Sulayman says.

“Social media has been tremendously important as it equalizes the opportunities and gives an equal chance for anyone to have followers and become influential.”