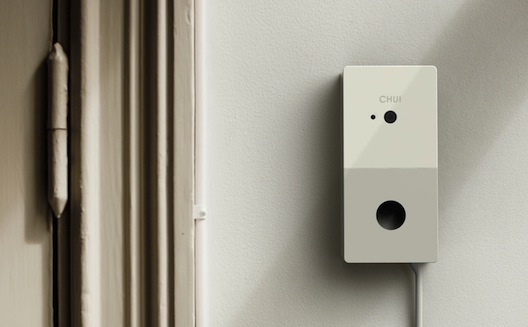 The story of Chui, a new generation of intercom, isn’t one you hear every day. Its trajectory has involved the city of Dallas, the Moroccan village of Taghazout, a young politician, and a former American football player. And it's gotten some attention already: the American-Moroccan tech collaboration has been featured in CNET, VentureBeat, and Pando Daily.

Chui is a smart doorbell that turns your smartphone into an intercom. It lets you unlock your door or chat with your visitor remotely through its video technology – imagine opening the door without leaving your couch, or while sun-tanning on a beach – and, more impressively, it has facial recognition technology, allowing it to open your door or play messages to specific people. Chui offers several other functionalities, and assures full security, as they explain in this interview with VentureBeat. You can order this smart doorbell on Chui’s website, with expected delivery in the fall.

Between Dallas, Casablanca, and Taghazout

The two cofounders – Chicago-born Shaun Moore, and Abu Dhabi-born, Casablanca-raised Nezare Chafni – met at Southern Methodist University in Dallas, Texas. At the time, Moore was playing on SMU’s Divison I football team The Mustangs, which taught him to be resilient and creative, he told us. Freshly graduated with a finance diploma, Moore returned to Chicago to join Merrill Lynch, while Chafni headed back to Morocco to become one of the youngest nominees for parliament in his country.

But Moore, for one, wasn’t satisfied by the corporate finance world. “I needed more fulfillment in my life,” said the young man. So one day, he booked a one-way ticket to Morocco and joined Chafni to continue working on a project they had started back in Dallas.

For the next nine weeks, the two friends settled in surfer town Taghazout, close to Agadir. “It’s a place where we can work and be completely focused. In Dallas where our network is located there’s a bit more distraction,” explains Moore. For us to be able to work in an environment where we can focus… was very beneficial to the early stage of the company.”

(They’re not the only ones who have found this village to be the ideal location to bootstrap and focus: the English team behind Maptia settled there for a year, and reflected on this choice in this article we published last year.)

The cofounders then headed back to Dallas to make the most of the resources that the U.S. has to offer. Two weeks ago, the startup joined the first class of new Boulder-based accelerator Boomtown.

Moving allowed them to get closer to mentors that have the experience to guide them on various major issues, like marketing or hardware distribution. They now have several advisors that they’ve contacted on their own, as well as Boomtown mentors.

Moore is clear on one point: launching a hardware product shouldn’t be intimidating. “It’s about your willingness to be educated; there’s tons of resources now,” he continues, “MIT and Harvard have free classes. It’s really about understanding the environment that you’re in and finding the right people to help you direct you through that.”

A new generation of crowdfunding

Like for any good hardware product lately, Chui was launched with a crowdfunding campaign. However, Chui is part of a new wave of crowdfunded products that has more to do with pre-ordering than crowdfunding.

Moore and Chafni chose not to use Kickstarter as they deemed the platform to be too slow and not flexible enough. Instead they used Crowdtilt, which allowed them to charge their buyers only once they deliver the product, for example. This was an important point for the two, as they wanted to be able to easily redesign and remarket their technology for commercial use (in gyms, for instance, or in the classroom) if the campaign was not successful.

But it has been: the Chui team has surpassed its $30,000 USD goal by 15%, and there are still seven days left of the campaign.

Interested buyers have until April 20th to order Chui through Crowdtilt. But if you miss that deadline, you will still be able to preorder your smart doorbell on Chui’s website until the launch.

To develop their idea into a viable product, the two cofounders relied on their savings, some funds raised from friends and family, and capital injection from their accelerator. The team, now including two full time employees and a few freelancers, all based either in the U.S. or in Morocco, will soon start raising seed money to go further.

“We’re absolutely open to foreign investment,” says Moore, who wants to stay true to their transnational roots, which, he’s convinced, will open them to new markets.