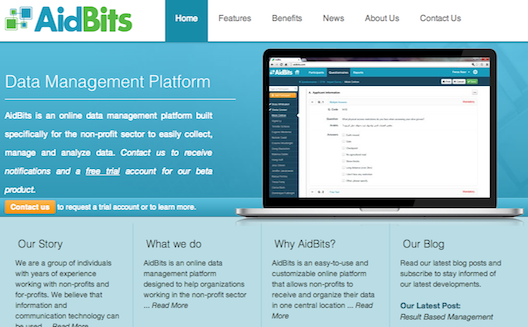 NGOs aren’t known for being the most efficient organizations. The amount of bureaucratic navel gazing, however important, it takes to get decisions made and money flowing usually subverts any possibility for agile response times.

In spheres like Palestine, where international aid money can make a real difference in people’s lives, what might seem like minor inefficiencies can really add up. Upon moving back to Palestine after many years in Canada, businessman Feras Nasr noticed the problem anew. After many discussions with acquaintance and IT professional Ibrahim Abu Kteish, together they decided to launch AidBits, a cloud-based platform aimed at digitizing – and thus streamlining – reports and data collection for non-governmental organizations.

“The less efficiency, the less effectiveness,” Nasr says from the Arabreneur co-working space on a cloudy Ramallah day last month. AidBits’s purpose derives from the impossibility of taking the long view of a humanitarian crisis when one has to work with, and synthesize, myriad badly organized data channels. ‘Simplifying Aid Management’ is the publicity slogan they’ve settled on, and based on Nasr’s statements, it indeed seems to aptly reflect what the company does.

“Most of these NGOs work with Excel… there’s lots of data dispersed over lots of different formats, collected from meetings, phone calls, emails,” he says. “Because much of the data is stored in spreadsheets or on hard copy, it’s difficult to create reports efficiently… and NGOs have trouble understanding the impact of their work,” Nasr emphasizes. In other words, if data is stored in too many different files, it’s difficult for organizations to share, analyze, and learn from it. AidBits, he says, “improves the chances of a project’s success,” by empowering each NGO to customize the platform and streamline tedious tasks.

NGOs enter their projects, complete with projected goals and activities, as well as indicators that help track a project’s outputs and progression. NGO management can also design custom forms and questionnaires, sort data, and at the end of a project, generate interactive reports, analyses, and visualizations. Another tool facilitates beneficiary tracking, allowing for organizations to follow recipients to ensure that aid is evenly distributed among target communities.

The platform, according to Nasr, significantly minimizes the data entry burden on NGOs; “this usually becomes the bottleneck [where things get backed up],” he says. Traditionally, “field workers collect the information and send it to their managers who then have to compile it,” Nasr says. AidBits “crowdsources this functionality,” prompting field workers themselves to enter the data, allowing NGOs to conserve resources in the office.

The trouble if you’re a new company selling new ideas to organizations notoriously stuck in their ways is that you may well go out of business while the company debates whether or not to buy your product. Hurdles so far have included educating potential customers about the benefits of using cloud technology for data, but the biggest challenge, says Nasr, “has been getting NGOs to give us a chance. It was especially hard convincing our first NGO [the French Première Urgence, focused on ameliorating situations of humanitarian crisis]. I don’t even know how we did it!” Nasr candidly recalls.

But if NGOs are lumbering giants, AidBits seems to be adept at turning on a dime. The startup used feedback from its first customer to help market its products to others. “For [our second customer] CARE International, we knew much better what we wanted to build through back and forth” with Première Urgence.

“When we first started [in late 2012], we were a very different company. Our intention was to build RFPs (a database for requests for proposals, etc.), but when we started speaking with potential customers and started realizing better the problems people were facing, we realized that our bread and butter was going to be monitoring and evaluation. There was nothing that worked for most organizations that was quick to set up, easy to use, and inexpensive,” Nasr continues.

Getting investment and mentorship from Arabreneur in January has relieved some of the pressure Nasr and the AidBits team had been feeling in terms of constantly trawling for customers. The initial investment helped (Nasr wouldn’t disclose numbers but at the time Arabreneur announced a $440,000 USD investment in four startups), as has Arabreneur’s subsequent connections with other potential investors. The startup will be looking to fund a Series A round, “maybe later this year,” Nasr says. Other, less easily quantifiable support has included help building the customizable platform, and connections with potential clients and partners, “even before the deal with them was finalized,” Nasr says.

For now, the focus remains on creating a stable product (“we’re still working on a pricing model,” Nasr says), as well as expanding the service to include a mobile and tablet app workers can take with them into the field. By the end of the year, AidBits hopes to expand its team, as well as geographically, to countries in the region in need of humanitarian assistance including Jordan, Egypt, Tunisia, Syria, and Lebanon.

While AidBits is of course a for-profit entity, it’s clear from conversation with Nasr that the philosophy behind it is much the same as the NGOs the startup targets. “These NGOs want to have an impact, they want their work to matter,” he says, and “we want to make their process more efficient” so their work can go farther – in the West Bank, and eventually, beyond.