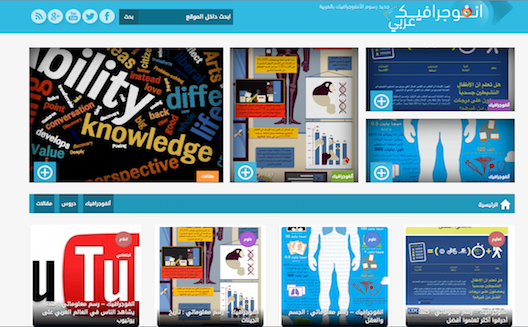 In light of many recent attempts to enhance online Arabic content, three Saudi entrepreneurs have launched Arinfographic.net to archive all Arabic infographics in one place, offering at the same time a customized infographic design service.

The concept of the infographic is built on the idea of representing any type of data or information in the form of visual content. Why visual? Many believe that images, symbols, and drawings are the easiest and fastest ways to convey a message to readers. Infographics are often used in marketing, education, and summaries of studies and statistical findings.

Having launched the website in November 2013 during the ArabNet Riyadh event to address “a lack of understanding on the part of the Arab user of what an infographic is and how it is designed,” founder and CEO Sami Al Mutairi hopes for Arinfographic to become the Wikipedia of Arabic infographics or the Arab world’s Visual.ly, a well-known website for infographic design.

Since launch, Al Mutairi has expanded the Arinfographic platform to include sessions and workshops in various Arab cities to introduce the concept and potential of the infographic. “We’ve found an overwhelming response on social media, especially in Oman, Dubai, and Riyadh,” says Al Mutairi.

After simultaneously launching the infographic archiving and design services through the same platform, Al Mutairi and his team are now separating the two services and further developing each of them. “We decided to establish a profitable agency for the design of infographics that we will launch within a month,” says Al Mutairi.

At the moment, design orders are so many that the team cannot possibly fill them all; they are forced to turn most of them down, says Al Mutairi. This may be due to the fact that Arinfographic continues to face the challenge of finding enough qualified designers and developers willing to work full time.

“We have up to ten designers to whom we outsource work on a freelance basis. Most of them are from Saudi Arabia, and despite that, we still cannot meet the demand. Because the designers do not work full time for us, the infographic app takes a whole week to develop, and the Motion Graphic takes up to three weeks. We’re also in constant search for designers who have skills that match our expectations,” says Al Mutairi.

Al Mutairi is trying to solve this problem by setting up freelancers with potential clients outside the purview of Arinfographic, building partnerships with design agencies, and looking for design talent from all over the Arab world.

Despite that, the platform seems to have achieved local popularity in a very short time span. In the beginning, most of the orders came from individuals; soon enough they started coming from institutions such as King Abdulaziz City for Science and Technology (KACST), the Saudi Arabian Chamber of Commerce, as well as governmental bodies that need infographics for the technical conferences they organize.

In terms of pricing, an infographic starts at $300 USD, going up to $400 if research is required. The team submits to the client both an e-version and a printable one. “I based our prices on the prices that Visual.ly charges, and we don’t take money from humanitarian organizations,” says Al Mutairi.

As for the archiving platform, the team plans to develop it so that its foremost role will be an educational platform that posts videos that freelance designers would contribute to produce. It will also include a special section titled Learn about Infographics which focuses on how to design an infographic, as well as its definition, types, and how to design each of them.

The team insists on maintaining the social and nonprofit character of the company as much as possible. Consequently, the company encourages freelancers to volunteer with the team in campaigns organized in universities and schools to spread awareness about infographics’ potential. “We were shocked to find out that curricula do not address this kind of design at all, and that’s why we decided to focus on organizing sessions and workshops in design faculties, where the most focus is usually on conventional designs such as billboards,” says Al Mutairi.

Al Mutairi’s plans also include the eventual foundation of a research center specialized in the way Saudis use social websites. “We want to support entrepreneurs who [want to learn about] social network users in Saudi Arabia,” says Al Mutairi. The team hasn’t however decided yet whether it will offer this service for free or not.

Competition does exist, in Saudi and regionally. There is the Saudi Byani platform, which is also striving to be the foremost reference for Arabic infographics. The Jordanian company N2V also launched the Discover Digital Arabia (DDA) initiative to create and post the latest trends and statistics on the internet and mobile apps status in the Arab world in the form of interactive content that focuses on infographics and video.

Maybe the two Saudi platforms should consider cooperating. But in any case, the demand for infographics is high and growing. The market in all likelihood comfortably accommodate more than two companies.