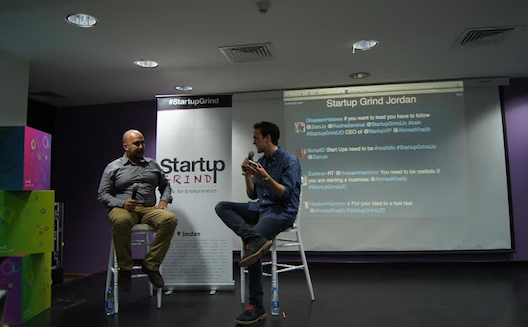 Sound advice from battle-tested entrepreneurs is a highly valuable asset for those trying to get a nascent startup off of the ground. It’s perhaps even more useful for entrepreneurs who have built a relatively successful startup but are facing difficulties as they attempt to scale it to the next level.

With the opening of the Jordanian chapter of Startup Grind, a global startup community ‘powered’ by Google, Amman-based entrepreneurs will have access to a steady supply of words of wisdom from leading figures from throughout the MENA startup community.

Startup Grind Jordan will feature monthly conversations between industry leaders, the host, and the audience that are intended to really dig deep and extract the nitty-gritty details about running a startup.

“We’re trying to connect, inspire, and empower entrepreneurs. We want this to be not just another event where they listen and then go home; we want serious people who really want to change the startup community in Amman. We really want to ‘move fast and break things,’ as Mark Zuckerberg says,” says Robert Carroll, Chapter Director of Startup Grind Jordan and event host (and Wamda contributor).

The chapter’s inaugural event last April featured one the biggest names in Jordanian entrepreneurism, Ahmed Alkhatib, founder and CEO of MarkaVIP, a hugely successful online flash sales shopping community. During the event, Khatib chronicled his personal history as an entrepreneur – from his failed attempt to open a falafel stand in San Francisco to his eventual success with MarkaVIP – and gave advice to the crowd of largely young entrepreneurs along the way.

The event had an intimate, informal vibe, which allowed the audience to really engage with Alkhatib and participate in the conversation. For me, this intimacy is the real strength of the Startup Grind concept and will prove to be a major draw for future events in Amman, as attendees will feel as though they are participants rather than spectators. I also think that speakers will also appreciate this atmosphere, who will enjoy the relaxed, conversational format.

Aspiring entrepreneurs are attending events like this across the globe. Since its inception in Mountain View, California in early 2010, Startup Grind has rapidly developed into a vibrant community, with chapters in over 100 cities in 41 countries. In the Middle East, the UAE, Israel, Turkey, Palestine, and now Jordan all have at least one chapter.

Startup Grind is fueled by a set of values that is designed to make the often difficult and lonely road that is entrepreneurism a bit less so.

“We believe in making friends, not contacts. We believe in giving, not taking. We believe in helping others before helping yourself. We are truly passionate about helping founders, entrepreneurs, and startups succeed. We intend to make their startup journey less lonely, more connected, and more memorable,” says the Startup Grind website.

The Startup Grind Jordan team recently finalized the chapter’s next event, which will take place on Sunday, June 1st and will feature a chat with Wael Attili, co-founder of the popular Arabic-language digital content creator, Kharabeesh.