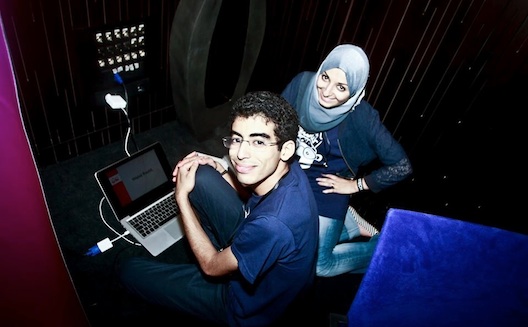 While there aren’t many, when a teenager launches a successful entrepreneurial project before earning their high school diploma or they’re eligible to vote, it’s sure to make a splash. British-Australian high school student Nick D’Aloisio recently made ripples in the media when he sold his app Summly in 2013 to Yahoo! for a reported $30 million USD.

But what about wunderkind from the MENA region? Due to many factors, including relatively low rates of internet connectivity, limited access to international funding sources, few examples of successful entrepreneurs (among other challenges), it can be argued that teens in our region have less opportunity to strike it rich at a young age than their peers elsewhere in the world.

But the following three entrepreneurs – Jihad Kawas, Abdallah Absi, and Youcef Es-skouri – prove that it can be done, even in the face of hardship. We caught up with them to understand what has motivated them to establish their companies instead of playing video games or hanging out at the mall with their friends. We particularly asked them about tips for teenagers who would like to start their own startups. Spoiler: these tips are good for all ages.

Seventeen year-old Jihad Kawas has co-founded Saily, an app for social and local ads primarily for the U.S. market, which will be launched in the next few weeks. Fascinated by his friend’s apps and inspired by Steve Jobs, he decided at the age of 14 to learn how to code apps simply because people use them. “I didn't want to be passive, I wanted to create things,” the entrepreneur says.

For two years, the Lebanese teenager participated in Startup Weekend events – winning three times – and worked on projects for both startups and agencies, “for fun,” he explains. “Honestly, I was only enjoying my time and discovering plenty of things.” After attending several events and meeting many entrepreneurs, he wanted to establish his own startup.

Using his earnings from freelance projects (between $2,000 and $3,000 USD per month), he hired freelancers to work for him on games he was developing, and self-funded the first costs of Saily.

Also from Lebanon, Abdallah Absi is already a well-known entrepreneur at the tender age of 21. At an age when others go to university, Absi, who never misses a Lebanese tech event, founded the crowdfunding website Zoomaal.

As a 13 year-old with an inclination towards computers, Absi started coding. A few years later, at the age of 16, he took the advice of his cousins living in Canada and founded his first startup with classmates: LebAutos.com, a website for car classified ads. The startup quickly shut down its doors due to lack of money, market maturity, and co-founders’ own immaturity, Absi says.

It wasn’t until he came across the YallaStartup blog, an organization dedicated to supporting entrepreneurship launched by Wamda’s CEO, Habib Haddad, that he realized that an “entrepreneurial ecosystem” existed in the region.

After participating in a YallaStartup competition, and winning a place in a seminar on entrepreneurship, he met his first mentor, Shadi Banna, from whom he learned the main principles of entrepreneurship. So when the first Arabnet conference was held in 2010, Absi was prepared: “This is when things changed for me. I discovered the startups and investors scene.” Between 2009 and 2014, he participated in several competitions and launched six startups: Yallasms.me, Falfesh.com, Crowdvolt.com, askolar.com, Rifflex, and finally Zoomaal.

Morocco also has teenager entrepreneurs. Youcef Es-skouri (pictured above) is a well-known figure in the Moroccan web community. At the age of 17, following a conversation on Facebook, the student decided to gather all the Moroccan geeks he knew online for an iftar during Ramadan. That first organized meeting was a success: a hundred people attended and the event didn’t finish until 5 AM.

Within a period of four years, the event (which he called GeekFtour) became a major gathering in the Moroccan web community. Last year, tickets sold out seconds after becoming available, telecom operator Inwi stepped into a role as supporting partner (check our article), and the event took an international dimension, with the first similar meeting in Algeria.

The 21 year-old entrepreneur was invited to Stanford University to participate in the AMENDS seminar, along with Abdallah Absi.

Do the opposite of what you’re told: tips for teenagers

According to Kawas, “the school is a trap, it’s a place where your creativity is dead.... they always tell you not to do this and that…. School teaches you what [to do] without... the possibility of failure.” It’s difficult, the entrepreneur went on, to go through school and retain the childlike curiosity and creativity needed to be a successful entrepreneur.

His (controversial) tip is: “you should do the opposite of what your teachers tell you and believe in your innovation, not in your school.”

His reasoning is that the stakes will never be lower, the ecosystem more forgiving than now: “When you’re 15 years old, you can fail and you don’t care about what the ecosystem will think of you. Experiment, learn, and fail now. Better now than later.”

Es-skouri agrees with him: “in the beginning, we don’t necessarily have a vision, a strategy. It’s normal, we’re young and we only have to go ahead and learn from our mistakes.... The first time, it will definitely be catastrophic and then you will learn.”

When we asked him about his parents’ support, he encouraged young entrepreneurs to follow their gut instincts, even when that means potentially disappointing people who care about your future. His parents, who were afraid at first of Es-skouri falling behind in school because of his startup, eventually became the first ambassadors of GeekFtour.

It’s the same story for Absi: to convince your parents, he advises being persistent and serious, to prove to your parents that you know what is good for your own future.

What I took away from these discussions was the maturity of these three young men, their ability to think creatively, and above all, their persistence. In the end, by ignoring convention, they were able to touch the essence of entrepreneurship, giving us all a good reminder of what it means to be an entrepreneur, at any age.