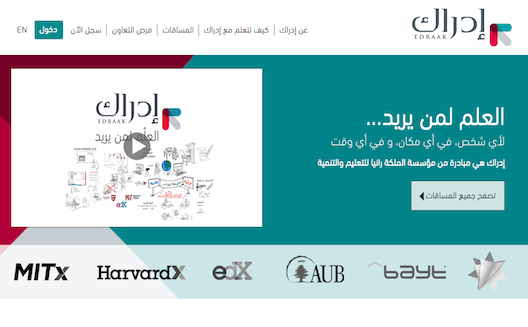 Massive Open Online Courses – MOOCs as they are more commonly known – are online courses that are offered to large amounts of participants, and they are quite often free. While English-language MOOC platforms such as edX, Coursera, and Udacity have gained traction across the globe, an Arabic MOOC has yet to gain a significant foothold.

Launched two weeks ago in Amman, Edraak is the first pan-Arab initiative of the Queen Rania Foundation for Education and Development (QRF) of its kind, and seeks to make quality education more accessible for a population that is thirsty for both additional and higher quality educational opportunities.

“Demand for education has been rising at an exponential rate across the region, across all segments of education. We specifically focus on higher education for now, but you can make the same argument across different segments,” said Nafez Dakkak, Edraak’s manager. “But at the same time, you just can’t keep up; with the number of students given the population growth, you can’t produce enough schools, universities, etc. It’s not just about access, it’s about access to quality education.”

Access and access to quality education are the two concepts that underpin Edraak, which is essentially a social entrepreneurship startup that is being incubated by QRF.

The origins of Edraak stemmed from Her Majesty Queen Rania’s vision for a better education across the Arab world, through the utilization of technology.

The platform is quite straightforward. Would-be participants register on the website for access to a host of courses taught in Arabic. Edraak’s course content comprises originally created courses and translated versions of MOOCs from edX, the prominent MOOC platform founded by Harvard and MIT with which Edraak has signed a multi-year contract. MITx’s Introduction to Computer Science course, which already has some 30,000 registered students, is an example of edX content that’s been translated by Edraak. An example of unique course content is The Arabs: Where and Where to?, taught by Mohammad Al Ississ of the American University in Cairo (AUC), which is a development economics course that examines the challenges faced by the Arab world’s economies and how they might be overcome.

In addition to academic courses such as these, Edraak will feature a series of non-academic MOOCs that will be taught by successful Arabs from a variety of fields, such as Nadine Labaki, the well-known Lebanese filmmaker. These courses are just as much about offering inspirational role models to young Arabs across the region as they are about teaching a subject, explained Haifa Al Attia, CEO of QRF.

Edraak will also offer a series of English-language MOOCs intended for a non-Arab audience. These MOOCs will allow Arabs to tell their story with their own narrative, providing an alternative to “the Arab story with a Western narrative, which is so often heard,” says Dakkak.

Students who complete a MOOC with passing grades will receive a certificate of completion.

A region in need of MOOCs

Given the well known and often-cited maladies of the region’s education system – from severely overcrowded classrooms to a lack of resources to a reliance on rote memorization – the need for MOOC platforms is clear.

Other Arabic language MOOCs have already been developed to address this need, such as Rwaq in Saudi Arabic, MOOC aggregator SkillAcademy (formerly Eduudle) in Egypt, MenaVersity in Lebanon, which has gathered experts in the creative community to offer original courses on a range of topics from social media to Lebanese cooking.

“You go from low quality education in the classroom to low quality end results or products in the job market, at the desk, etc. All these sort of problems, whether it’s access to quality education [for job seekers] or access to quality graduates [for companies] is something we’re trying to transform through Edraak, but… there is no silver bullet. Edraak is not going to suddenly just change the world,” said Dakkak.

While Edraak clearly can’t single-handedly neutralize the numerous systemic issues that are hampering the region’s education system, its fusion of technology and high-quality education certainly makes for a hopeful combination.

Edraak “is harnessing technology to offer part of the solution, and hopefully people will start picking it up,” said Al Attia, clearly excited for the project’s potential.

Technological issues are likely to present Edraak with one of its primary challenges; there are concerns over whether participants will have access to internet connection with enough bandwidth to download and stream MOOC lectures. This concern is especially pronounced for places like Yemen, which has a significant number of registered participants but lacks the internet infrastructure available in other parts of the region such as Jordan and the Gulf. In response to this issue, the Edraak team is trying to tap into community-based tech centers where participants might access internet with the required bandwidth for free.

The team is also trying to establish partnerships with internet providers that would allow users to access and use Edraak content for free. The team is in talks with telecom providers in Jordan in hopes of facilitating a partnership like this that can serve as a model for other countries across the region.

“It’s not enough to provide a MOOC that everybody can join; they still have to have an internet connection and the ability to download those lectures,” said Al Attia.

Additional challenges include raising awareness about what MOOCs and how they are used, and creating a sustainability model so that Edraak can remain operational.

It seems that Edraak has the potential to equip a new crop of future entrepreneurs with the skills necessary to be a valuable member of a startup, especially given their plans to introduce a number of entrepreneurship-focused courses that are already offered on MOOC platforms such as edX and Udacity.

Another hope among the Edraak team is that the platform will help create and foster ‘communities of interest’ around a particular field, be it filmmaking, economics, or computer science, which will in turn yield regional rather than national industries.

While Edraak will undoubtedly expand the educational opportunities for Arabs across the region, for many, the platform will provide more than better access to quality education. It will provide access to education full stop.

“We usually ask people ‘why are you signing up for Edraak?’,” explained Dakkak. “And we had this Syrian guy that said ‘when the Syrian revolution started, I had to stop my education. All doors were closed, and now with Edraak, it’s not just about education for me, it’s about hope that I can keep going.’”