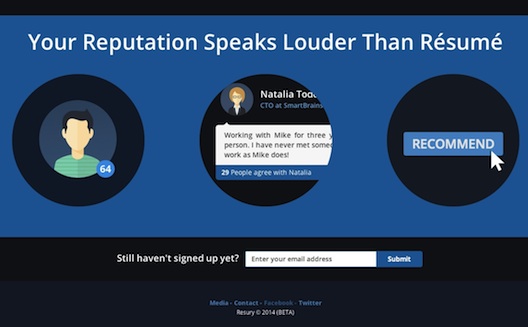 A month ago, Saudi entrepreneur Fady Yahya launched the new, pivoted version of Resury. The recruitment app has come a long way since its first installment launched in November 2012, which was a clear failure. How do you learn from a failure, and how do you move on from it? Yahya shares his experience.

The starting point of Resury was a belief that CVs lacked humanity; instead, he wanted CVs to tell great stories, hence the name Resury, which is the combination of resume and story. The idea was that your friends know you and can help recruiters understand better who you really are. So in Resury v01, friends are asked to review their friends’ resumes, and to give their opinion.

It's what people do, not what they say, that matters

With the original app, even if people had CVs, they didn’t share them because they felt uncomfortable. “We asked people. They said they wanted feedback. But it’s like going to the gym. Everybody say they want to go to the gym, but nobody goes,” explains the founder.

These came as a surprise since Yahya thought he had done his market validation right. All in all he interviewed 50 people, but that wasn’t enough, he now believes. The problem was that “rationally people said yes, but emotionally they were not ready. We didn’t get that emotional part.” To combat this, Yahya believes entrepreneurs need to test as much as possible, and pay attention to what people do more than what they say.

Another problem was the perception people had of the brand. “We were too human; people thought we were not corporate enough,” the founder explains. So for v02, they decided they needed a new visual identity. “We were ready to change everything,” he says. “We’re now more test-driven, we do tests about everything” from the name, to the logo, and even the colors (the new blue scheme, he believes, gives off a prestigious and serious image).

Take care of the user experience

What the team quickly realized too is that they lost a lot of people because of a bad registration process. After their pivot, they implemented a one-click process, and created mockups to test on users and see how people used the page, e.g. where they clicked.

Contrary to what many fans of lean methodology believe, he thinks that entrepreneurs should not rush to get their product out, but rather take time to test the product thoroughly. “We did [these tests] briefly the first time and thought we understood, but it wasn’t enough.”

Failing is the first step to starting something new

This failure is a good thing he believes: “Failure is good, it takes off the over confidence you have when you’re an entrepreneur.” And in their case, they had nothing to lose, and could only win in maturity. “People don’t know much about us, that gives us the freedom to change things.”

It took six months for the company to pivot. This is a rather long period, which the founder justifies by a focus on quality and test, and not on deadline.

In late 2013, Yahya decided to focus on a new pain point: that the recruitment system is time-consuming and inefficient. The Saudi entrepreneur realized that the pain in recruiting lay in the amount of data and applications companies receive, and set his mind to help companies understand people from CVs before spending time on interviews.

He decided to focus on endorsement done right. He believes endorsements on LinkedIn are treats people give each other. He came to the conclusion that in order to learn about people’s true personality traits and other specifics, they have to ask questions to their friends.

His targets are young graduates from business backgrounds for whom personalities matter a lot. The Saudi-based company wants to start with top Boston universities, where Yahya studied, and counts on the virality of the product itself (after all, people will need to talk about the website in order to get answers from their friends).

Now, even if the product is a great idea, one question remains: would people show this unknown website on their resume? The team has learned a lot about creating a product; now, they will have to target the new challenge of finding their path in an already crowded market.