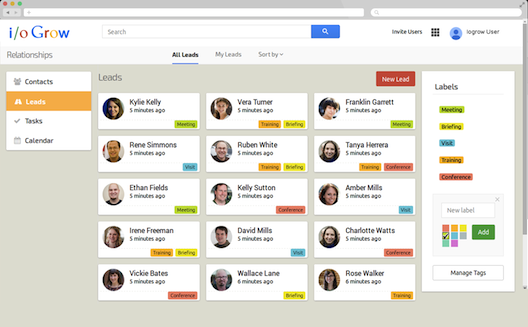 Some Egyptian startups have offices on world-famous Tahrir Square, while their Dubai-based cousins work from fancy accelerators. But ioGrow has more humble office space: a little house in a dead-end street in the suburbs of Algiers.

Despite its coziness, the house is bursting with energy. Over delicious pastries, (which, I promise, didn’t impact my unbiased judgment), and with crazy dynamism and contagious passion, cofounders Tedj Meabiou and Hakim Karriche presented to me their startup, a new take on customer relationship management (CRM).

IoGrow is one of those services whose innovation comes from its simplicity. Convinced that existing CRM platforms, SalesForce included, are generally complicated, expensive, and overloaded with tools and functionalities most small businesses don’t need, Meabiou and Karriche made the decision, in 2013, to create an easy-to-use CRM platform tailored to startups and SMEs.

But there was no need to reinvent the wheel, the two developers realized: Google had already created all the services necessary to build a CRM platform, so they decided to create their CRM platform using only Google services such as Drive, Gmail, and Hangout. It makes double sense: web users already know how to use Google services, and they’re free and ready to be integrated. (This is the same reasoning that led Moroccan-American e-education startup MyVLE to go for Google services too.)

Their integration of Google services proved successful, if you look at the simplicity and ease of use of ioGrow’s beta, which enables users to manage a database of clients and leads. To enter contacts, the user can either add info manually or use a Google Chrome extension that automatically pulls all relevant information from a LinkedIn, Twitter, or Gmail account. Once on a contact page, the user can send emails, add notes, attach documents, and create events and tasks. All the information can be accessed easily through four categories: contacts, leads, tasks and calendar.

Starting in September, the ioGrow team will make a premium version available. This version will enable users to manage clients’ complaints, follow developments on client acquisitions, and collaborate with employees on customer relations through a group feature.

After six months of working part-time, Karriche, then senior CRM consultant at Success2i (a consulting and integration company specialized in Salesforce), and Meabiou, then working on his own software integration company called WeRework, presented their project to Benabes Belfodil, Success2i’s CEO. Belfodil then joined them as CEO of ioGrow, and the two cofounders started working full time.

Since then, the team has grown. The startup now employs 11 people.

For now, the startup doesn’t seem to have a clear marketing strategy (lacking both a market predilection forecast and a launch strategy); but Karriche says this part of their lean approach and will be further engineered based on beta users’ feedback. The only action – and expenses – the team has taken has been to distribute flyers at Google’s ceremony, Google i/o, to which ioGrow marketing manager Ilyes Boudjelthia was invited, in his role as Founder and Manager of Google’s developer group GDG Chief. Participation in this event allowed the startup to reach 90 beta testers in Algeria and the United-Stated in one week.

The team seems to like risks; either that, or they don’t realize they’re taking one. The visual identity and user experience are notably close to that of Google. This doesn’t seem to worry the co-founders, who believe that the association would only bring more users to Google’s APIs and money to the multinational through its Google Cloud Platform.

Google may not have approved the design, but it seems to have approved the concept. IoGrow was chosen as a semi-finalist at Google’s Cloud Developer Challenge 2013 and gave a few pieces feedback (which ioGrow’s team used to push its product to further resemble Google).

Now, it remains to be seen if this startup can make it on the international market despite its roots on a sleepy alley in the outskirts of Algiers.