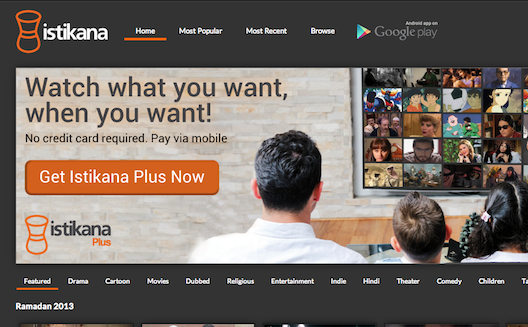 Televisions have been in widespread use in many countries for over fifty years; surprisingly, though, TV viewing habits largely haven’t changed with the rise of the internet in the 1990s and 2000s.

But the recent rise of on-demand streaming services and the introduction of smart TVs stands to finally impact people’s relationships with their TVs. On-demand internet based services have massively expanded customers’ choice of content available in family living rooms. California-based Netflix expects to hit close to 50 million worldwide subscribers this year, having increasing its customer base five-fold in as many years.

For Samer Abdin, CEO and co-founder of Dubai-based online video service Istikana, the rise of these services worldwide was an exciting development that had largely bypassed TV in the Arab world.

“Tareq [Abu-Lughod, COO and co-founder] and I were sitting around in the summer of 2010 talking about Netflix and all the fun stuff going on in the US, and we started complaining about the fact that there wasn't something similar over here for Arabic content,” said Abdin.

“Tareq has been in content for a long time and he phoned a few friends and pitched the idea to them. The feedback was good, we started to sign some content deals and in parallel getting the technology sorted out,” said Abdin.

Adopting a lean approach, the two pushed out their minimum viable product as soon as it was ready, iterating the ad-based model as they went. “Integrating everything with an ad system that worked really smoothly did take some thinking. Once we got it consumer-ready we pushed it out, while continuing iterations on the product.”

Istikana dropped its advertising led business model when it launched a subscription-only service in February 2014, offering a single package covering all content and viewing platforms.

The company now has over 25 content partners ranging from small independents to larger players like Jordan’s Arab Telemedia, which has over 5,000 hours of content in its archive.

Istikana’s latest development is the addition of Google’s Chromecast feature, allowing viewers to stream videos straight onto any television and control them through a mobile device. This allows TV viewing without the need to plug in a laptop or buy a smart TV, which still have low penetration in the MENA region.

“Chromecast is our first foray into third-party smart TV,” said Abdin. “Anyone with [an Android] can watch anything we have on the big screen for as little as AED 120 ($33 USD).”

Given their highly developed telecoms infrastructure, the GCC countries and specifically Saudi Arabia are the core markets for Istikana.

“We have no issues in places like Saudi Arabia as opposed to places like Lebanon where the infrastructure still has a long way to go, so our services are quite limited [there],” said Abdin. “When it costs $100 USD for a one Megabyte broadband line, you’re down to a pretty small subset of the population.”

Istikana sees the biggest scope for expansion in North Africa and has also seen some strong numbers from Arab expats in the US, Europe, and Australia. 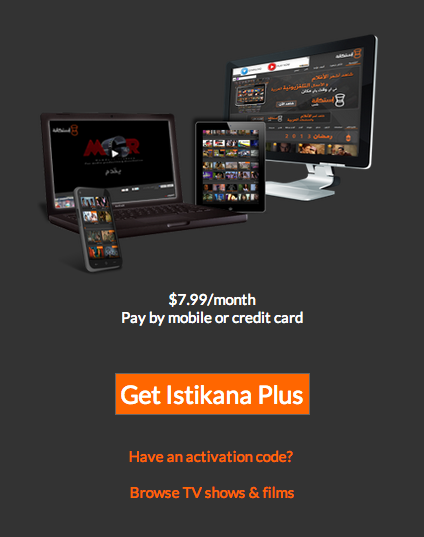 Across the board, one of the biggest challenges in marketing an online service in the region is managing payment for customers without credit cards, and Istikana is no exception. Recent studies show that 70-80% of online transactions in the Middle East are still cash-on-delivery, which is an issue when you do not have a physical product to deliver.

To get around this, Istikana has worked on operating billing payments methods, saying by the fourth quarter of 2014 it will have the “most important operators in the region” on board.

Although the use of credit cards is growing in Saudi Arabia and other Gulf states, online security is a big concern for online shoppers and people are much more likely to trust their operators with payments than the seller.

“We are still relatively new to the [subscriptions] game but so far we are quite pleased,” said Abdin. “We have worked hard to make it as convenient as possible for subscribers to pay.”

Istikana was one of the first companies to launch Arabic-language online videos in the MENA region, with current market leader Shahid – streaming content from Dubai-based MBC – launching around the same time.

More competition has since entered the market. Dubai-based Icflix launched in July 2013 with a focus on Arabic content along with Hollywood and Bollywood movies.

But Abdin believes there is room for more competition as demand for services is booming worldwide with several companies successfully competing in the more mature US and European markets.

“The market in the end will be pretty damn large for this type of thing,” said the CEO. “If you look at the US and Europe there isn't a channel that does not have it’s own video offerings.”

“Even so, Netflix in US, Lovefilm in UK, and their European counterparts are all selling like gangbusters. Demand for video is big and as such there is going to be scope for various types of video services offering different types of content,” added Abdin.

“I watch YouTube a fair amount but I use it for certain things and other online services for other things,” he explained. “They don’t go after different demographics. They are the same guys in a different mood.”