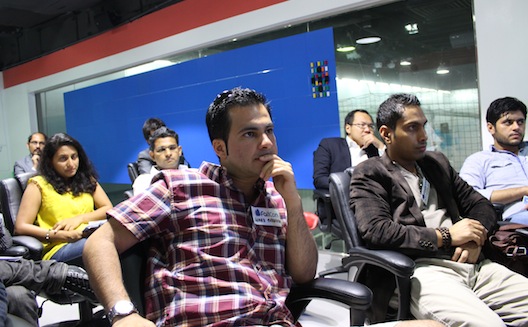 In its first Middle East outing, Silicon Valley’s FailCon proved a refreshing departure from the typical fare at entrepreneurship events by engaging participants in an authentic dialogue about the failures faced and lessons learned by entrepreneurs behind some of the region’s brightest startup success stories. Held on Thursday, July 3rd at Dubai’s latest co-working space The Cribb, FailCon Dubai attracted an intimate audience of young professionals, entrepreneurs, and investors eager to learn more from speakers including Dany El Eid, founder of pixelbug; Rania Kanaan, co-founder of Ananasa.com; Ahmed Al Kiremli, founder of Games Corner and Iraqi Touch; and Genny Ghanimeh, founder and CEO of Pi Slice; among others.

Founded in San Francisco in 2009, FailCon is a one-day conference geared towards startup professionals, investors, technologists, and aspiring entrepreneurs who seek to embrace failure and its lessons in order to prepare for success. The event has expanded to include over a dozen cities on six continents, including Barcelona and Tokyo earlier this year, with future conferences planned in Tehran, Porto Alegre, Brazil, and Toulouse, among others.

Eighty percent of new businesses worldwide fail within the first two years, yet the general and regional/cultural perception towards failure is very negative. Moreover, constructive and transparent public discussion about failure rarely occurs in the regional ecosystem. FailCon Dubai seeks to dispel this silence, explained the organizers Mahboob Imtiyaz and Gautham Narasimhamurthy, who are also co-founders of KarmaSnap, a regional startup incubated by Turn8.

“It can often be daunting for an aspiring or struggling entrepreneur to only hear glamorous success stories,” explained Narasimhamurthy. “Failure is part and parcel of the entrepreneurial journey and FailCon creates a platform for these valuable conversations about the many setbacks faced by and mistakes made by entrepreneurs.”

Kamal Hassan, CEO of innovation 360 and TURN8’s director set the stage for the evening’s presidings by candidly sharing his own entrepreneurial hurdles: “I failed and I failed miserably. I had zero startup experience. We developed a core team based on our collegial friendships, not on competencies. Some of us even went bankrupt or lost our spouses and partners. Failure is inevitable. What is most important is to learn from each failure. Ideally, you fail early on in your venture, early on in your career when you are not held back by personal or financial commitments, so you learn to be resilient.”

He finally emphasized: “The important thing is not that you failed, it’s that you shouldn’t give up.”

The stories that especially resonated with the audience were from entrepreneurs who adopted a “tell-it-like-it-is” approach and openly shared the stumbling blocks they faced on the path to success. Ambareen Musa, founder of Souqalmal.com – the region’s first online comparison site — recounted her failures when it came to making hiring decisions for her fledgling start-up, as well as ongoing challenges maintaining cash flow and securing overdue payments. Medea Nocentini, founder of Consult and Coach for a Cause, also addressed the key “colossal mistakes” most entrepreneurs make. She remarked: “Individually reflecting on and sharing your failures with your mentors and fellow entrepreneurs is important. We don’t all make the same mistakes, so learning from each other’s experiences is vital so we better ourselves and build better businesses. Unless you’re doing something illegal or criminal, the only real colossal mistake is to give up.”

Serial entrepreneur and former Head of UAE at iMENA Holdings Ritesh Tilani highlighted the inevitability of facing failure, drawing from popular success stories and personal experience, and addressed the regional failure taboo. “There is no shame in failing. It’s a part of the learning process. Succeeding without ever failing is more the exception than the rule. And the founders of many of today’s biggest success stories faced a string of failures in their past. Rovio went through six painful years and 51 failed games before they finally made Angry Birds, and the company is now worth billions of dollars.”

Tilani continued, “My last startup received plenty of press and critical acclaim, and that gave me false hope so I kept going, but the market wasn’t ready for it. Passion, commitment, and perseverance are important attributes for success, but one should be practical and business-savvy and recognize when external forces are just against you. I’m not disappointed that I failed, I’m disappointed that I didn’t fail fast enough. You need to know when it might be time to cut your losses and move on.”

David Passiak, Head of Innovation and Research for Dubizzle, was in attendance and remarked: “So many startup events focus on glamorous outcomes and put speakers on a pedestal. FailCon did the opposite, and as a result I think the Q&A was more engaging because everyone in the room felt like equals.” Passiak added, “We all fail, that's just part of being human. By openly embracing how failure can be a learning opportunity on the path to success, events like FailCon Dubai will contribute towards creating a community that’s truly supportive of aspiring entrepreneurs.”

FailCon Dubai’s first regional effort appears to be a crucial step in the right direction, building recognition for “failure stories” in entrepreneurship, in line with steadily evolving attitudes worldwide. Phillips opined: “As cities and communities seek to strengthen their entrepreneurial ecosystems, finding a way to create a culture that is more accepting toward failure becomes necessary. You cannot create a truly healthy and innovative startup environment without a strong support structure for failure and risk taking.”