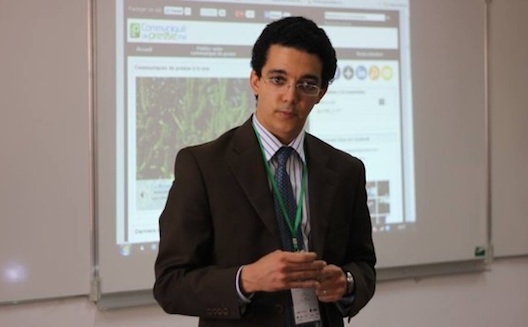 A year ago, Karim Jazouani, the web and startup ambassador of Morocco, left us far too soon. Since then, Moroccan web lovers and entrepreneurs have keenly felt his absence; a year already that the ecosystem has missed his visionary spirit.

“Karim had a quality vital to this job; he was charismatic, and earned people’s trust easily thanks to his knowledge of the sector, his swift intelligence, and a natural empathy. Giving back with humility and good thinking, were two things that made him really happy,” said Synergie Media co-founder Younes Qassimi, with obvious emotion, while paying his respects to Jazouani at The Nexties. He recounted how Karim managed to single-handedly convince Yahoo! to open a subsidiary in Morocco (and Wamda to expand its mandate to include the Maghreb).

“You said we didn’t have enough coverage of the Moroccan startup scene,” Wamda CEO Habib Haddad reminisces, “and you wanted to give exposure to the innovators of your country. And exposure you gave! You took your time perfecting your pieces, sometimes being always late on the deadline because you were worried that you might not be giving enough justice to the entrepreneurs you were covering. But you touched every entrepreneur you interviewed, beyond just putting words on a blog; you always went the extra mile, thinking of ways to support and help them with their problems.”

For the second year, we’d like to pay our respects to Karim, one of our most inspired contributors, by shedding light on the dynamism of the ecosystem he helped enable, and the talents of those who want to continue his work. The Karim Jazouani Prize for Entrepreneurship Advocates will award the recipient with access to Wamda’s extensive network of mentors, investors, and fellow entrepreneurs

Moroccan entrepreneurs are invited to suggest names of the people who they feel have helped foster entrepreneurship and innovation in the kingdom this last year. Wamda will work closely with the winner to offer them our expertise and access to our networks so as to best continue supporting entrepreneurs both in Morocco and in the broader Arab world.

You have until August 7th to fill out the online form.