When the corporate world isn’t a source of suspicion for the startup it’s often one of mockery. After all, how many sectors were disrupted by startups when the bigger companies proved themselves to be unable to innovate fast enough? From Napster to Uber, the relationship has never been a quiet one.

However, for startups, the hunt for scale is a tough one, and this is where big companies can help, with a network, a supply chain, or a global brand which makes it easier to go big. So what better place to try out new formats of association between corporate and startup worlds than emerging markets?

In 2013 General Electric CEO Jeff Immelt wrote in his annual letter to shareholders that while sub-Saharan Africa had been off the radar back in the early 2000s, now, it was very much on the radar. When it comes to GE’s investments in the continent they are huge and widespread. Immelt even suggested that they could be selling more gas turbines in Africa than in the US before long.

Part of their venturing into a complex market where power cuts are the norm and corruption is rife GE has set up Garages in Nigeria’s economic capital Lagos.

As there is no selection of startups or mentoring versus equity, Garages is neither an incubator nor an accelerator. It’s more like an open fab lab where anyone can come and try different tools in the field of new manufacturing, such as 3D printers and laser cutter.

Garages’ objective is to create a culture of trust and increase the employability of potential employees in a country strategic for the growth of the group. “The decision to extend GE Garages to Nigeria was taken in January this year during the visit of our global Chairman and CEO Jeff Immelt," Osagie Ogunbor, communications manager for GE West Africa, told Innovation is Everywhere.  This is also part of a global plan to take the Garages experience beyond the US and make it global. Nigeria just happens to be one of the first locations outside of the US. With each stop, the garage will be tailored to meet local needs, and continue building on the great ideas and learnings from previous cities.”

When we met Stefan Jacob, an entrepreneur picked by the Coca-Cola Company to run the Singapore team, he was pretty clear about the a common gripe among big companies today.

“The issue with big companies is that the legal aspects are predominant," says Jacob. "Any innovation will go through lawyers, and they will analyze it rather in terms of risk avoidance, not taking account the cost of lost opportunities.” 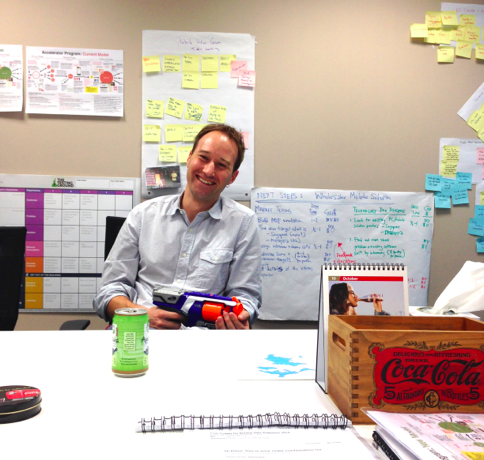 Stefan Jacob of the Singapore Accelerator.

Each team will technically own a startup funded by the Coca-Cola Company, and using the Lean Startup methodological framework, they will be trying and testing ideas within the scope of the Coca-Cola brand.

If a team finds success Coca-Cola will get part of the profit, and will have proved able to innovate out of the group itself. As Jacob added: “We operate as innovation agencies, in a similar way to advertising agencies for big brands.”

MEST Incubator, Ghana: betting on the long-term training of entrepreneurs

What the Meltwater Entrepreneurial School for Technology (MEST) is doing in Ghana is probably the most dedicated of these new ties between corporates and startups.

Originally a media and market research company, Meltwater opened the MEST incubator in Ghana in 2008, just at the start of a startup ecosystem trend which continued until 2010. 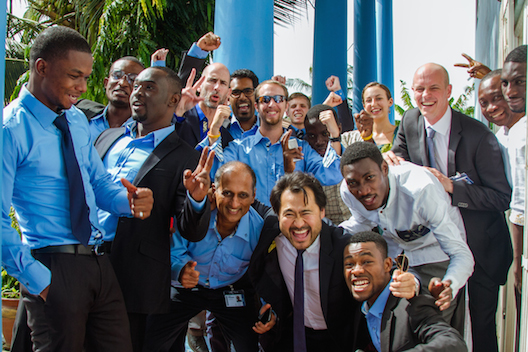 The technology team of the MEST incubator.

For MEST the concept is to first train a generation of entrepreneurs, as they did between 2008 and 2010, and all within a 24-month incubation program. Entrepreneurs in Training (EiT) are offered, alongside the traditional incubation services, food and accommodation during the program, a condition still necessary in some parts of Africa.

The results of such a long mentoring and training program has since produced quite amazing results among the incubees. In 2011, Nandimobile, a SMS company, won an award at the US festival LAUNCH.

In 2012, Dropifi, a smart widget that allows companies to analyze, discover and re-channel messages, won the Global Start-Up Open Competition funded by Kauffman Foundation, as well as getting into Forbes' Top 20 Startups in Africa.

In all three cases, the partnership between global companies and local entrepreneurs make a lot of sense. From Nigeria to Ghana, India to Brazil, the middle-class is rising and the tech ecosystems are still at an early stage. These markets are still untapped compared to the US, Europe or China, where competition is fierce, and room for improvement less impressive than in emerging and frontier markets.

It is easier for companies bold enough to move there to have a significant influence in technology innovation, trusting relationships with entrepreneurs who will drive job creation in the long-run, and get to know the culture of the future big economies in the world.

For startups, the mere scale and network of big companies is a key asset, especially in emerging markets where the relative isolation of startup ecosystems may prevent them from being visible overseas.