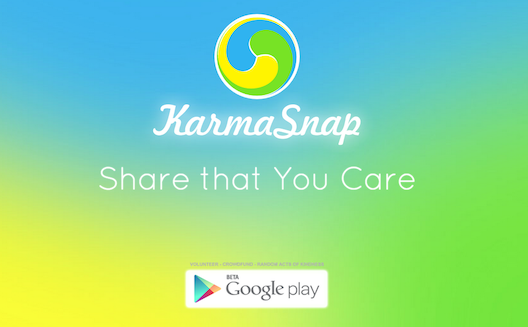 Earlier this year, LinkedIn CEO Jeff Weiner posted a blog post on the site calling for an app that could generate random acts of kindness, suggesting how you could give back to your community depending on your interests and circumstances.

While Weiner’s suggestion was rather speculative, the founders of KarmaSnap have taken this concept of spontaneous benevolence to heart. They’ve created a tool to match charity organizations with people looking to give their money and time to help others.

KarmaSnap is a mobile app designed to connect the dots between non-profit organizations and the donors and volunteers they depend on to carry out successful campaigns. The platform allows charitable organizations to streamline their operations when it comes to raising funds and volunteers.

Three friends from Bangalore founded the startup, then successfully pitched it to Dubai’s Turn8 seed accelerator, winning $30,000 USD in funding and a five-month stint to develop the idea at The Cribb in Dubai.

The partners have now launched the beta stage of the app and rolled it out on Android with a limited feature set.

“People in the non-profits can place volunteers now and in the next few weeks organizations will also be able to raise funds as well,” said Narayanan. “It will take another three months for us to get the whole thing right including the crowdfunding part and the website.”

For individual users, the app connects volunteers and donors to the organizations that suit them, allowing “matchmaking” between the funding and execution of a charity campaign.

KarmaSnap’s revenue model is to charge the non-profit organizations a subscription fee. Also, the startup will charge a transaction fee for successful crowdfunding campaigns, to be paid by the beneficiary rather than the donor.

“It is a whole campaign management solution for these organizations. With the mobile dashboard they can create, manage, and measure the impact of their campaigns and also use it as a social media tool,” said Narayanan.

“Analytics is also something that is really valuable to these organizations because they spend so much money on creating fundraisers, especially offline, and at the same time you have the growth of social media marketing strategies and advertising,” he said. “So our analytics help organizations to get to know the geographical location of the people giving funds and learn who to approach for the next campaign.”

Volunteer organizations, which coordinate programs using a variety of tools such as databases, email, and WhatsApp, can also move communications onto a single platform.

KarmaSnap will initially focus on regions where high concentrations of non-profit organizations are operating, such as South Asia and the MENA, while targeting the US and Europe for crowdfunding.

Organizations in India, for example, would be able to match non-resident Indian fundraisers in the West with NGOs using volunteers on the ground in India.

The founders believe that two areas where the app can be particularly effective are for quickly mobilizing funds and volunteers for disaster-relief programmes, and for matching people in need of blood with donors of the same blood type in the same area.

The KarmaSnap team are currently setting up users in Bangalore to test it before the launch of the full-scale product and an accompanying marketing campaign.

“We will have social media strategies and advertising on Google and other things, but it is essential that we target the non-profits and their existing donor bases – the people who are already following these organizations on Facebook,” said Narayanan.

According to a World Bank study, the global crowdfunding market is estimated at $5.4 billion with about 30% of this figure going to non-profits. Total annual crowd-funding is forecast to expand to $93 billion by 2025.

To give an indication of growth in the sector, the world’s largest personal fundraising website GoFundMe has raised over $380 million from over 6 million online donors since its launch in May 2010.

As the KarmaSnap founders roll out the full version of the app they continue to look for further funding from venture capital and angel investors to support the expansion of the business.