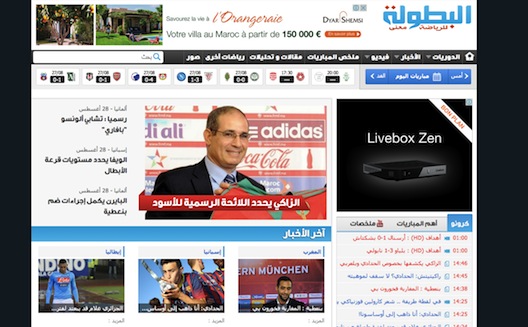 Patience and passion can be worth more than fundraising or aggressive marketing; this is an often-repeated maxim that might sometimes be hard to believe. But all it took me was a chat with the team of Elbotola (which means 'the championship' in Arabic). This Moroccan sports news and information website was launched in December 2007, a time when internet in Morocco was a mysterious untapped market. Now, Elbotola is one of the top 20 most-visited websites in the country, with 30 millions page views per month.

Behind this project is an unusual yet complementary team, consisting of a football aficionado, Zakaria Filali, a UI/UX fan who knows nothing about sports, Oussama Benhammou, and a web development buff, Amine Chouki. By the end of 2011, the seasoned Moroccan entrepreneur who co-founded TechWadi in Silicon Valley, Akram Benmbarek, joined the team as a non-executive co-founder. The discreet team has agreed to share their story with us.

“We started with 0 dirham,” says Benhammou. Who would have put their money on a website back then anyway? No one ever imagined that an information website could cover its costs. “There wasn’t even Adsense in the Arab world,” remembers Benhammou, adding that “everybody was convinced we were wasting our time.” But their determination stayed untouched: “our dream was to become the first sports info website in the MENA region, it didn’t matter if it took us five or 30 years.”

For the first four years, Elbotola was a hobby to the founders. Using the salaries from their full-time jobs, they were able to pay for website development but not for the writers, so they had to find contributors willing to work for free.

“We established a strong brand from the start,” that focused on the readers, collaboration, explains Benhammou when asked how he convinced people to work for free. The facts that the website was the first of its kind helped too.

To attract more readers, Benhammou dedicated lots of time to developing the user interface and experience, and worked with the rest of the team on developing new functionalities to get the readers more engaged. They wanted to make sure this wasn’t a site where people would read an article and then click away. 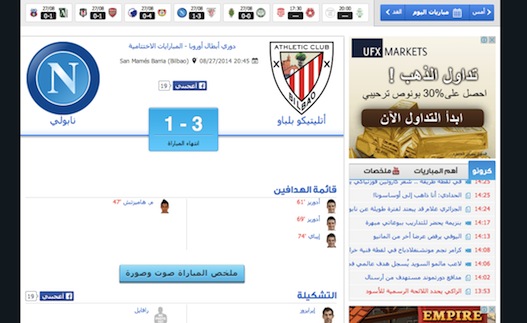 Fast forward to 2012. Internet is on the rise, and online ads are finally catching on in Morocco. At this point, the team decided to that the “time had to come to convert this digital effort into a real high-growth commercial structure, with ambitious goals,” says Benmbarek.

By the end of 2012, the website had three digit growth, and the co-founders could afford to work full time on the website. In 2013, things accelerated even more: the site generated $250,000 USD, a 300% growth from the previous year. The team finally could concretely hope to become the biggest sports portal in the Arab world.

Today, Elbotola is the fifth largest digital content editor in the MENA region, says Benhammou, now that they’re drawing 25% of their traffic from readers in Egypt, France, the United States, and Saudi Arabia. To cater to this increasingly regional (and international) audience, the team has grown to cover sport news from those other MENA countries, and has reached 18 employees, including three abroad, in Algeria, Egypt, and Saudi.

Until now, Elbotola’s main advantage has been its exhaustive coverage of both international and local sport events – they were the first to cover the Africa Cup of Nations, Benhammou points out proudly – but that won’t be enough to conquer the MENA region.

The team is now developing a second competitive advantage: technology. The three founders are currently working on new social and interactive functionalities, including a chat feature, collaborative content functionalities, on enhancing real-time score publication, and on improving the website’s multiplatform availability (so far Elbotola’s app is only available on Android and Samsung TV). Even though the team wouldn’t say more about what they have in store, they sound really confident; when I spoke to him, Benmbarak was gloating about “an exceptional technological roadmap that is going to surprise the bigger sports information websites.”

To fund all these novelties, the company is about to ink a fundraising deal with several Moroccan investors. This will enable them to market their website in the GCC, and to develop content for each market, including English content for UAE-specific sports. A French version is also to be launched by the end of the year. But the team doesn’t plan on stopping with news; they’re also planning on launching an e-commerce store that will aggregate sports-related items available online, with links back to sites selling the products.

This team might be discreet, but don’t mistake it for a lack of ambition or tenacity.