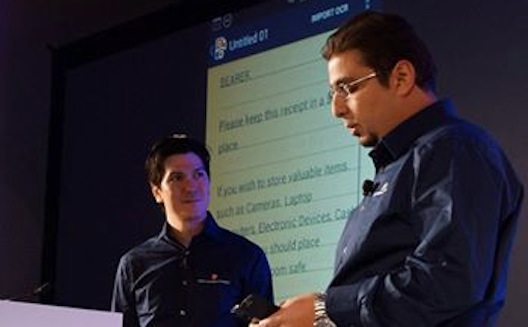 The Smart Document Scanner application was the first idea to come out of the Alexandria-based company's new in-house entrepreneurship program. Coincidentally, the office productivity app was also the brainchild of Softxpert founder Ahmed Abdelhalim.

Smart Document Scanner debuted in January at the International Computer Electronics Show (CES) in Las Vegas, where it was among the top ten in the Mobile Apps Showdown competition. In February it made SAP’s top five apps list, in March it won the People's Choice award at ArabNet Beirut, and just last month ArabNet named it one of their top ten favorite apps to come out of the Middle East.

Abdelhalim said the reason for its success was that there were few well-made apps on the market and the higher quality contenders were pricey. Softxpert’s researchers were looking for competitiveness within the market and potential for growth. Abdelhalim said they found that the scanner application market was immature with gaps in usability – many were unstable and appeared to be made by “beginners”.

"We found several weaknesses in the other apps, actually I would say 70% of the other apps are not mature," he told Wamda. "We have a more intuitive app and we are using the latest trends of UI design, used by Google and Dropbox and so on." A well designed scanner app, Abdelhalim explained, meant making use of free cloud services such as Evernote or Dropbox, creating an app that can sense the edges of a document, and crucially, work around mobile phones' low processing capabilities to create a smooth user experience. The most challenging aspect was finding a way to use the increasingly sophisticated cameras in mobile phones and allow users to enhance and edit the image easily, in spite of that low processing power.

Abdelhalim’s team of “around 35” software developers produced an app that can convert scans to PDF, turn images and PDFs into editable texts thanks to Optical Character Recognition technology, and sync and file all kinds of documents from receipts to contracts and notes with your preferred cloud services.

This level of functionality, Abdelhalim says, "is what makes Smart Document Scanner successful."

That, and the fact that it’s got both a free version that allows 10 scans a month and a premium version which is a one-off cost of $4.49 USD.

The Smart Document Scanner app is the first app to come out of Softxpert Innovate, the company’s entrepreneurship program.

Softxpert, which Abdelhalim started in 2010 with entrepreneur Helmy El-Mangoury, specializes in outsourced software development for clients largely based in the US and Switzerland.

Abdelhalim said he launched the program to give his team of developers something to work on that was theirs.

"I wanted them to have a feeling of ownership and that their ideas can be implemented and realized in the company they work in. They don't have to leave and start their own company," Abdelhalim said. "It was about implementing entrepreneurship inside the company.”

Softxpert marketing coordinator Eman Battour said the program was intended to run every year, with a short time frame of six months from development to release.

“All team members can submit their idea for a new technology startup and we start to look into each idea and the one that qualifies, we start working on it and the idea owner gets to be project manager and an equity holder,” she told Wamda.

In May last year those in the company with ideas entered them into the competition, and after two months of market research it was Abdelhalim’s which came out on top.

The next step is an iOS app for iPhone, and one for Google Glass.

"We haven't started yet but it's something we're planning and we would like to start by the end of this year," Abdelhalim said, adding that a Glass scanning app would be the first in the world.