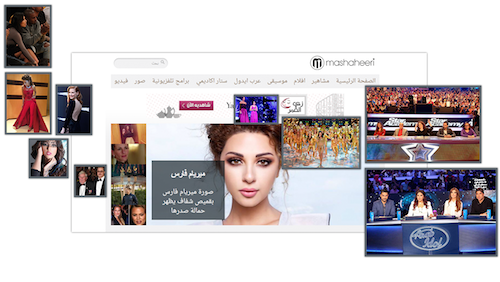 When Paris-based digital publishing company Webedia acquired a majority stake in Diwanee in March, the Dubai-based Arabic content company immediately got access to a crop of successful sites just waiting to be translated into Arabic. With launch last week of celebrity and entertainment news portal Mashaheeri, the women’s content portal is testing the first of these translated sites.

With access to content from other websites marketed by Webedia, such as Grazia.fr and purepeople.com, Diwanee is able to create quick turnarounds on the latest in celebrity news. “We are faster to launch and stronger in terms of content,” says Delphine Eddé, Diwanee’s cofounder and its publishing director. “The synergies we are able to build are strong.”

Diwanee, which already enjoys over seven million unique visitors a month to their sites such as yasmina.com, 3a2ilati.com, and mooda.com, say that bringing a celebrity website to the market will only serve to increase their audience. “We have an average of 20 stories a day […] with a focus on the glamorous side of celebrity rather than the gossip,” says Eddé. Covering both MENA and international stories, the site is broken up into sections like movies, music, and TV, through which they’ll be keeping audiences up to date with the latest on shows such as Arab Idol and Star Academy.

Eddé believes they have the edge over others from the region, including sites such as Egypt’s filfan.com and UAE’s anazahra.com. “You just have to look at the success of Diwanee's other sites to see that Mashaheeri will provide competition,” say says. “We have up-to-the-minute news and high-quality content. 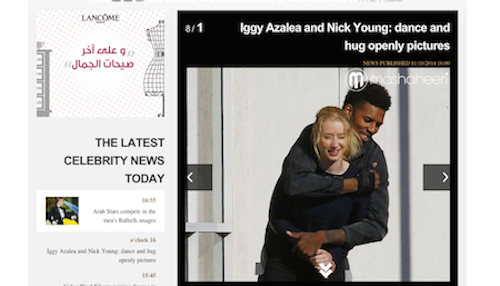 While 15-20% of content is international news, the most popular stories since launch last week have been those related to the show Arab Idol. The level of interest in celebrity news in the Middle East is not on a par with that of the West, with its gossip sites and print publications dedicated solely to movie stars popping to the supermarket, there is a burgeoning interest in what the stars are up to as the region’s film and television industries grow.

“We don’t have paparazzi culture in the Middle East,” says Eddé, “and I don’t think this will change any time soon.” However, “the region has a flourishing music, film, and TV industry, and so a website like Mashaheeri is plugging into this consumer need for information about the people within those industries.”