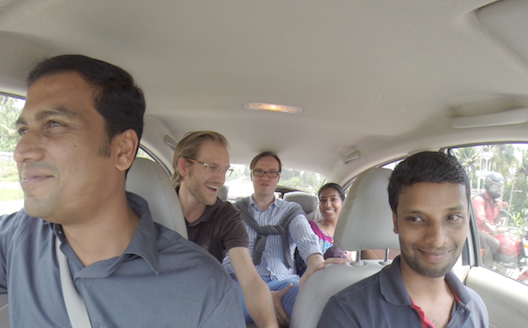 Not many entrepreneurs can claim that their brightest business idea was born on the road, but for Frenchman Benjamin de Terssac, that was the case for his UAE startup.

“While commuting every day from Dubai to Abu Dhabi, I made a few observations,” he tells Wamda. “Firstly, most of the cars were occupied by a single person: the driver. And due to traffic congestion, it took me around two hours to reach the office [in non-rush hour traffic, the same journey would take around an hour and 10 minutes]. Other people at my workplace were also facing the same issue.”

Taking a taxi every day was not really an option to, as de Terssac puts it, “relieve my commuter’s stress.” After all, it’s hardly cost effective in the long run. A single cab ride from Dubai Marina to Abu Dhabi Corniche (a distance of approximately 124km) costs 230 AED ($63) on average. Multiply that by two to factor in the return journey, 20 times a month, and you’re left with a monthly expense of a whopping 9,200 AED ($2,500).

There’s also the fact that petrol prices in the UAE are among the lowest in the world, with a gallon costing around 6.50 AED ($1.77). So it makes economical sense for residents to drive themselves.

And that’s when de Terssac – who has been based in the UAE for three years – had his ‘Eureka’ moment. To provide a solution that would help passengers and drivers share a ride and its cost, and in turn ease traffic congestion and benefit the environment.

Now cofounder and CEO of Carpool Arabia, de Terssac’s website offers a portal where drivers and passengers alike can register and find users who commute on the same route with whom to share rides – and expenses. A 124km shared ride with Carpool Arabia costs between 25 AED ($7) to 40 AED ($11) per seat, a steal compared to the costs mentioned above.

And he may be onto something. The UAE government is said to be looking at a number of measures to reduce congestion on the roads, particularly in the run up to the 2020 Dubai Expo. In 2008, the government legalized carpooling, and Hussain Lootah, Director General of Dubai Municipality, recently told a Hamburg business forum that the country’s current level of traffic congestion is “unsustainable and all efforts must be made to limit the number of journeys made in private vehicles.”

It seems the government has a reason to worry.

According to the country’s Roads & Transport Authority (RTA), there are approximately 541 cars owned per 1,000 people in Dubai alone. This number far exceeds similar statistics of New York City (444 cars per 1,000 residents), London (345), and Singapore (111).

During the 2014 Government Summit, Ahmad Hashim Behroozian, CEO of RTA’s Licensing Agency said that this average increase of more than 100,000 cars per year is “too high for a small city like Dubai with a population of 2.5 million.”

In fact, if the current rate of ownership continues, then there will be 1.5 million registered cars in Dubai by the year 2020.

It was during Startup Weekend Dubai, in late November 2013, that Carpool Arabia came to life. Coincidentally, it was the very same weekend de Terssac would meet his business partner – now cofounder and Chief Product Officer – Guillaume Arnaud (pictured below, left). 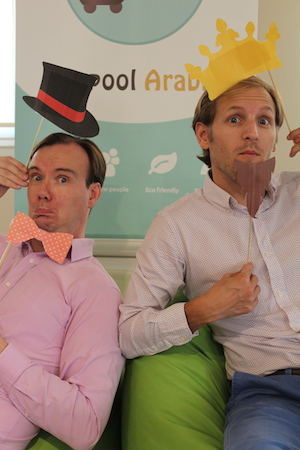 “I had never met him before,” reveals de Terssac. “But the 54-hour program helped us find a lot of common interests regarding setting up an online venture together. I’ve been very lucky to be able to form a team of ambitious and committed people during that event. From day one, we were able to put together a team of five [the cofounders and three developers], which helped us a lot to be faster on the market.”

The company was bootstrapped with a $50,000 investment from the founders, and six weeks later, CarpoolArabia.com was open for beta users. The website officially launched on February 18, 2014.

The growth rate for this small scale startup is looking promising. As of December 1, 2014, 35,667 seats have been offered across 667,354km throughout the UAE (the average trip being 46km). According to the CEO, this marks an increase of 58% month-on-month, with the number of users now reaching 965 (an increase of 36% month-on-month). 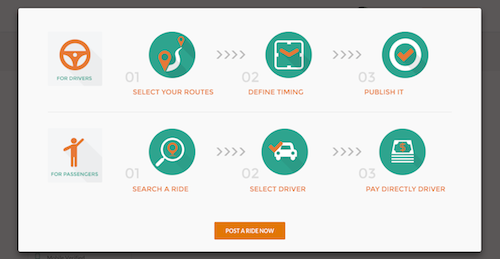 He continues: “Carpool Arabia has the largest carpooling community in the UAE. Every day we offer more than 300 rides across the country. When users come to our portal, they are likely finding the ride they need.”

How safe is safe?

Naturally, it’s advised to exercise caution and common sense when arranging carpooling. Carpool Arabia has taken steps to ensure that all rides are safe and fuss-free.

While carpooling between co-workers, friends, and family requires no additional RTA approval, the company recommends that all its users register their details with RTA portal Sharekni.ae if they intend to carpool with someone they do not know.

“I would say that the most important thing is to feel comfortable with your co-rider,” de Terssac says. “Check their profile, chat with them, or see if you belong to the same community. That helps a lot. We also have other safety tips on our website.” 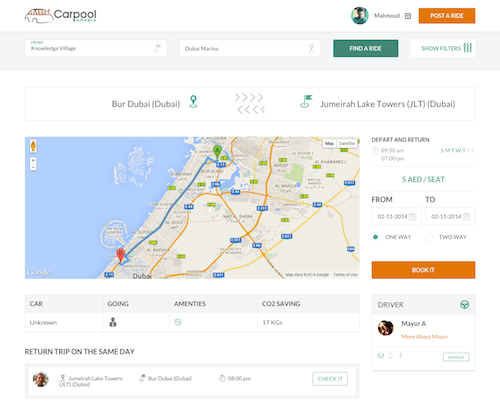 De Terssac and his teams have big plans for 2015 – they’re set to focus on their mobile offering as well as online payment solutions.

In terms of capital required, they’re hoping to raise cash through crowdfunding.

He explains: “We are now looking for an external investment of $250,000 in order to go mobile, develop our marketing plan, attract and retain the best talent in the team, and prepare our online payment gateway.

“We started a crowdinvestment campaign on Eureeca, and we have already received $72,000 – which is 57% of our target. The campaign will last for another 36 days.”