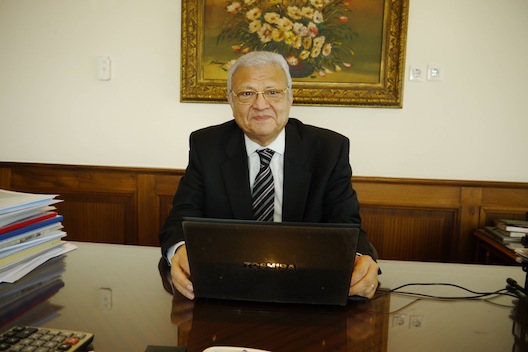 Egypt's slow broadband speeds and rickety IT infrastructure are major issues throttling growth in the internet-based 'startup revolution', but Minister of Communications and Information Technology Atef Helmy is confident at least some of these issues will be solved by 2020.

In an interview with Wamda, Helmy outlined his plans to help innovators and put an end to broadband speeds that average 2.7 Mps – the 18th slowest in the world.

There's the wholesale upgrade of national broadband infrastructure by 2020 and construction of seven new technology parks in Upper Egypt and the Delta from next year, as well as government projects and changes to investment, telecoms, and data security laws.

These plans don't come cheap. Helmy expects the broadband upgrade to cost $6 billion and the tech parks to suck up another $3 billion. Helmy is looking to tap private and foreign investors for 85-90% of the total cash needs with a pitch that the ICT sector is a “guaranteed” return on investment.

Ventures such the National Broadband Initiative, the tech parks, and government projects including smart meters and smart grids will be offered to potential investors at an investment summit in Sharm El-Sheik in the first quarter of 2015.

Helmy's vision is that one day Egypt's ICT will become a cyber Suez Canal: transporting data between continents and countries "like the ships" on the terrestrial waterway.

Wamda: What was the state of Egypt IT infrastructure in 2011 and how far has it progressed?

Atef Helmy: Before the revolution we were growing at a rate of almost 15-17% and the sector was a major contributor to the GDP of the country... around 4.5%.

Last year the growth rate [for the ICT sector] was exactly 9.8%. This year we are shooting to achieve about 12-13%. The number of mobile [subscribers] by the end of the year 2010 was about 59 million, and the number of internet users was 19 million. By the middle of this year we reached 101 million subscribers for mobile and 45 million for internet.

But unfortunately with this tremendous growth in number of subscribers, whether in mobile or internet [users], and at the same time the boom in services in the internet, we were not able to upgrade our infrastructure to cope.

We have a very aggressive plan to upgrade our infrastructure and at the same time to enhance and upgrade the quality of the services through different technologies.

In the case of infrastructure we launched the National Initiative for Broadband [in December 2013]… and we started with a pilot project covering a number of ministries. We are following the implementation of the broadband initiative through two phases. The first phase should end by the year 2017 and the other one by 2020.

Wamda: What are the plans to improve internet speed and infrastructure?

Helmy: We are working with all the telecom operators. For example Telecom Egypt for the time being is changing the [copper] cables to fiber optics. At the same time the other mobile operators are trying to improve their services by strengthening their coverage, and spreading their coverage across the country. Vodafone already, I think, announced that they are going to spend more the 2 billion EGP ($28 million) to improve infrastructure.

Helmy: The return on investment is guaranteed, to a great extent, because we have the basic elements that will allow us, with our partners, to succeed.

Most of our young generation is below 30 years old and at the same time we are developing their skills at an international level with very advanced training in ICT. At the same time I think of the infrastructure that we have like the Smart Village, the technology park in Maadi, and in the beginning of next year we are going to introduce five to seven new technology parks across the country. This will make us more competitive when it comes to cost of operation.

I think this all gives you an indication [that] Egypt is back and this sector is one of the top sectors to attract investment.

Wamda: What is the biggest challenge for Egypt's ICT sector today?

Helmy: We are working on changing some of the laws that have an impact on the telecoms sector and information technologies.

We have submitted three laws already. The Law of Telecom, that is number one. We have submitted a change to some of the articles of the Electronic Signature Law to allow us to use more applications related and accepted by the whole government with digitized electronic signatures, rather than being just dependent on papers with physical signatures. And [there's] the Law of Data Privacy Security and Freedom of Access.

With this huge dependency now on big data as well as the internet services, and [with improvements to] the latency and the quality for the data traffic between the west and the east, and the north and the south, Egypt is perfectly positioned to have at least some of the cloud computing services of major enterprises from the US and Europe to be built here. To be able to do that you need this law of data privacy and security.

Wamda: What other projects is the Ministry working on?

The third project is the commercial registration for the Chamber of Commerce… to have a real map of what companies, what kind of activities, what kind of services, to be able to plan for the future and as well as to better serve the citizens through having a complete database to all sort of services.

Wamda: The new telecoms company, which will build and run broadband infrastructure, and a unified mobile license are also two of these projects. When will they be finalized?

Helmy: The company is progressing very well and we are expecting in the coming weeks that everything will be finalized for that.

There are three committees created to finalize the company. The first one is related to all the administrative work that is needed to create a new company... the second committee is related to negotiating the license and the terms and conditions of the license with the regulatory authority. The third one is about the business plan for this company which is being finalized in the coming few days.

Wamda: How much involvement will military-owned companies have in this company?

Helmy: A part of it.

Helmy: Again, it’s still being decided. We haven’t yet finalized the percentage of the shareholders in this company.