At a time when Egypt is in dire need of support for its innovation and technology sector, a necessary part of the economy’s revival, Global Entrepreneurship Week provided the perfect setting for Cairo Innovates, the city’s first international exhibition of innovation. Shedding light on more than 100 projects and startups in the field of scientific research and technology, the forum acted as an effective link between innovators, funders, mentors, and scientific supporters.

Held over two days at the start of December at the American University of Cairo’s GrEEK Campus the event was sponsored by the Academy of Scientific Research and Technology (ASRT), in collaboration with Nahdet El-Mahrousa, the civil society group concerned with activating social entrepreneurship ideas. 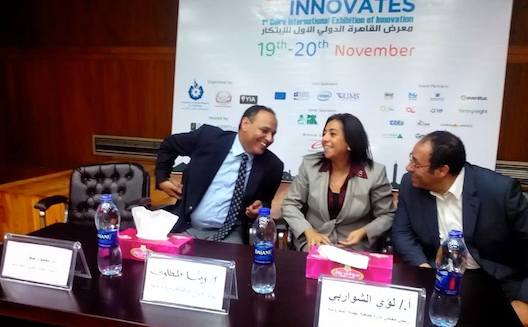 On the sidelines of the fair, a series of workshops, round table discussions, and seminars were held on the future of crowdfunding, EU research and innovation programs, business model identification mechanisms, the keys to practical innovation, the importance of benefiting from failures, marketing of innovative products, and how big data and analytical forecasts can guarantee the success of startups.

One particular panel looked at the “Egyptianizing” of technology - the reliance on local innovative ideas that are commensurate with the climatic and geographical nature in Egypt, rather than to import Western technology.

Another saw the investment group Cairo Angels organize a session to allow inventors and innovators pitch and discuss ideas before a panel, who then gave immediate feedback. 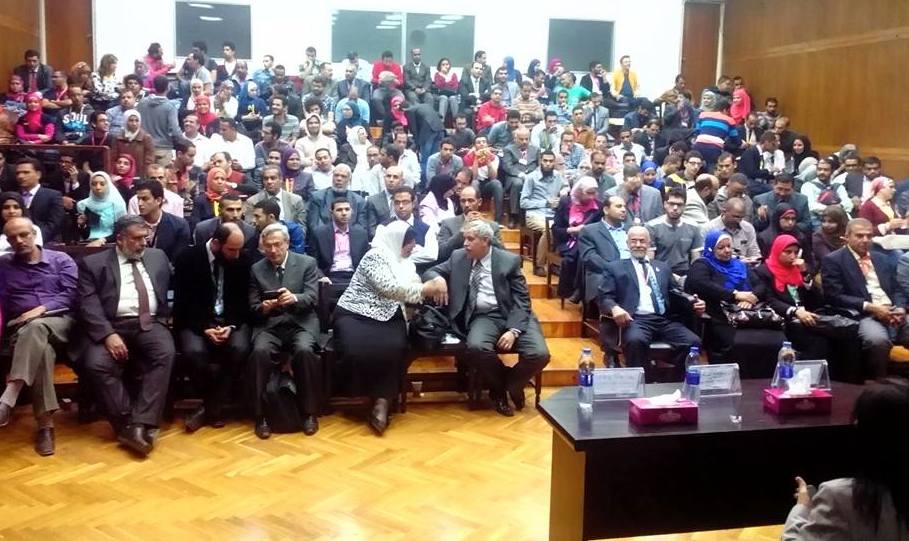 Minutes before the conclusion of the first innovation exhibition in Egypt

The innovation projects sponsored by ASRT are very much focused on the inclusion of technology that serves societal and economic needs, and as such the innovation projects they sponsored covered marketing, financing, training, and patent registration, with ideas ranging between energy, health, food, and security, taking up a large space of the area allocated for exhibition stands.

The exhibition included numerous projects, such as GreenPan which recycles consumed edible oil for the production of biofuels as an energy alternative; a device named Visually Impaired which enables blind people to write and draw as if sighted; a remotely controlled power transmission device named Wireless Power Transfer; and an integrated farming project, which aims to boost aquaculture through the use of solar energy. 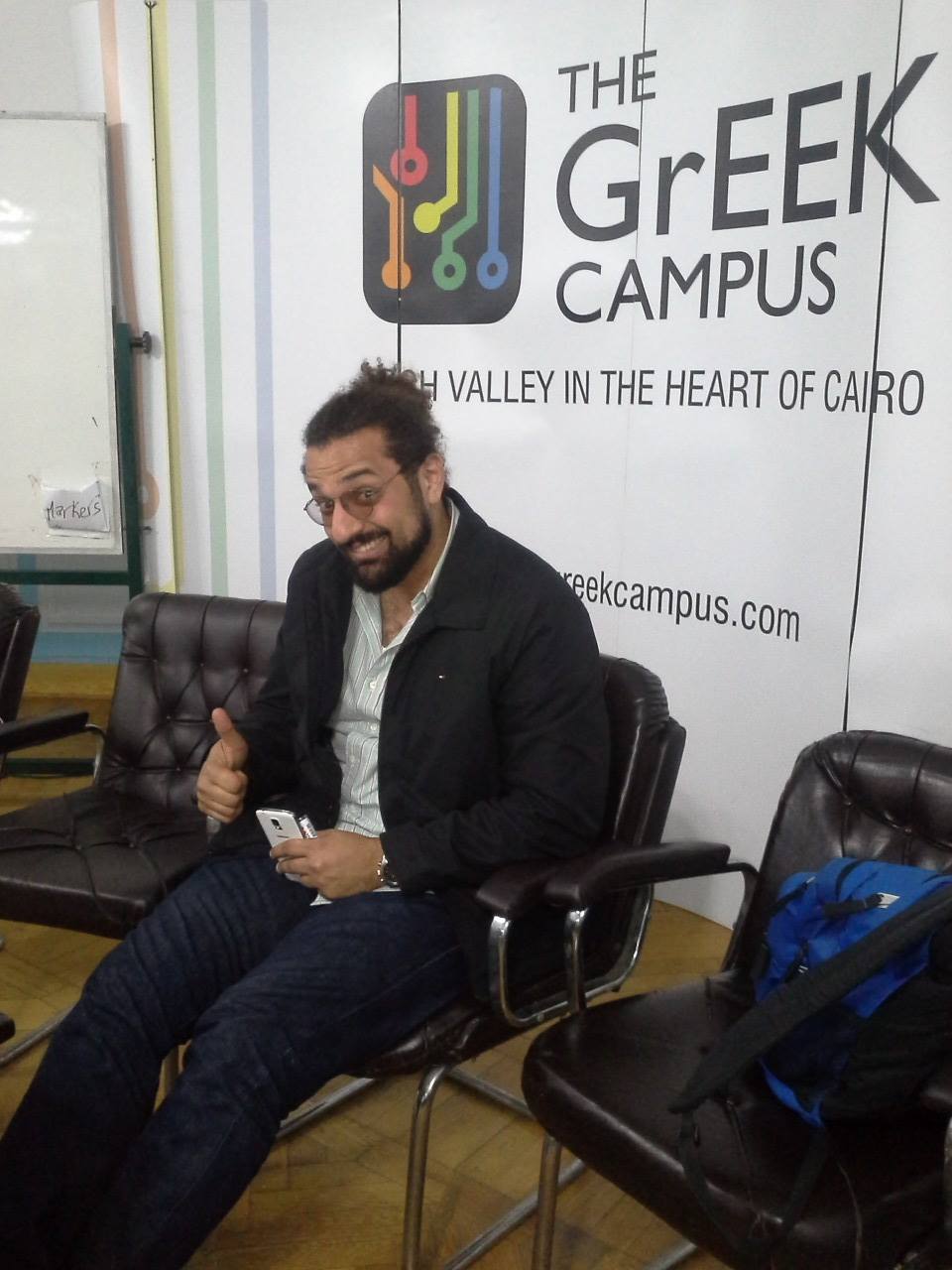 Mohamed Rizkallah speaks about the STE2AM system and its potential use in education to meet the needs of society.

Cairo Innovates saw a strong presence of a number of companies that support innovation and scientific research projects, including the Technology Innovation and Commercialization Offices (TICO), which provides training and funding, and is also an initiative by ASRT that aims to create a network of specialized offices to support innovation in research and industrial clusters, including Egyptian universities.

TICO pitched the Stirling Engine, a device that converts thermal energy to mechanical energy, a computerized semen analysis device for labs and hospitals, and a smart irrigation project that uses solar energy.

The Arab Foundation for Science and Technology (ASTF) – which is headquartered in Sharjah with branches in most Arab countries, and is concerned with offering ideas and projects in the scientific research and innovation sector to meet economic needs in the region – had a special presence at the exhibition, announcing its readiness to support SMEs in terms of marketing, training, funding, and development through its annual contest in technology entrepreneurship.

Injaz Egypt, who work to empower Egyptian youth with training in entrepreneurial work through voluntary educational programs, presented a set of programs and initiatives specifically designed to serve and develop the entrepreneurial and innovation sector, such as Adopt a school  and Start Up. The also organized a job fair aimed at recruiting talents in the field of scientific innovation.

Innovety, a company specialized in management, consulting, and training in the entrepreneurial innovation sector, announced a series of workshops specially designed to enable and train youths on entrepreneurial technological work.

Participation of universities and schools

The exhibition was attended by young inventors at schools and universities from various governorates, consistent with the aim to promote the importance of scientific development in Egypt.

There was also TraffiSense, a traffic monitoring system using a high-resolution camera that tracks vehicles through the instantaneous scanning of their outer specifications.

And the youngest participant at the fair was down to student Maryam Bayoumi, was based on the dislocation of silt accumulated behind the [Aswan] High Dam to extract gold from it.

There was remarkable diversity in terms of company specializations, scientific projects, and innovators. Check out some listed below:

•Dawayer: the first studio to specialize in the re-use of agricultural waste as raw materials to be used in the making of different products to find alternatives for timber, such as sugar cane and rice straw.

•Dynergy: for smart speed-bumps that generate electrical energy through the motion caused by the movement of cars.

•Utopia Energy City: a team of students developing ways to exploit solar energy, convert it into electricity, and store it underground in power repositories to be used for the illumination of roads at night.

•Triptab: an online application for the management of tourism projects.

•Jam Robot: a robot that teaches children scientific innovation in an entertaining way, controlled remotely by an Android phone.

•Jouzour: a project that specializes in the production of goods using agricultural waste.

•Enjad: an electronic arm created by a group of engineers that can be installed anywhere, particularly for wheelchair users. It can be controlled through simple buttons, and its strength equals that of a human arm.

•Tok Tok fab Lab: a mobile lab that moves on four wheels visiting schools, villages, and slums, accompanied by trainers. It contains several labs in which students and trainees learn science and practical skills in a simplified manner.

With funding as a primary concern for startups, Cairo Innovates was keen to connect innovators with online investment firms and crowdfunding platforms online – such as Yomken, Madad, and Sharquity – introducing them to the different funding templates available for the entrepreneurial market.

The exhibition also highlighted the role of government institutions in the financing of technical projects, with the participation of the Science and Technological Development Fund (STDF), the main source of funding for scientific research in Egypt.

When Susan Salem, the current MD of the Social Enterprise Incubator at Misr El Kheir Foundation, talked about Gesr, she noted that the objective of the program is to invest in technology entrepreneurship projects to address social problems in Egypt.

By the end of the exhibition, 29 innovations won 20 awards worth 50,000 EGP each. The awards were offered by the Mohamed Farid Khamis Foundation, Community Development, the ASRT, and the Ministry of Communications and Information Technology. The awards included winners from all categories - individual awards, success stories, and prizes for university projects and research centers.

The fair itself own the award for Best Event during the Global Entrepreneurship Week (GEW).

"The event aims to create a generation of inventors through the stimulation of innovation and scientific research in Egypt,” said Nada El Gammal, director of innovation programs at Nahdet El-Mahrousa. “It brings together innovators from various governorates of Egypt and professionals in the scientific entrepreneurial sector. It aims to spread a culture of innovation and invention, and to highlight the role of innovation in economic development and to allow new horizons for SMEs that are based on innovation.”