By all accounts the global freelance economy is burgeoning. For many, it acts as a way to earn income in the absence of formalized, full-time employment opportunities. For others, freelancing acts as a series of short-term jobs that cumulatively supplant the need for a full-time source of income. And for a substantial group of people – moonlighters – freelancing provides income that supplements that which they earn through full-time jobs.

Freelancing is so many things to diverse groups of people – stay-at-home parents, retirees, recent college graduates, and others – because of its very nature. Because it entails the completion of short-term work contracts by people with the relevant skills over a fixed period of time, virtually anyone with an applicable skillset can participate. And for firms that hire freelancers, the process may end up being more efficient than tradition methods of temporary staffing.

In the MENA region, the freelance economy has grown substantially over the course of the past two years. Nabbesh, a site that allows those seeking work to match with those who need tasks fulfilled, is the largest freelancing company in the region. Moreover, Elance-oDesk – the world’s largest freelancing site – hired a representative in Dubai in June of last year, which will likely only accelerate the trend.

According to Loulou Khazen Baz, Nabbesh’s founder and chief executive, the regional market offers different challenges that aren’t present in the US, where the freelancing industry first began to be digitized. “I wouldn’t say that the market here is as developed as in the US. Freelancing is a very novel concept in the region. A lot of people do it but informally. There’s definitely a need for more awareness [about] its benefits, and how it can help create extra, substantial income.”

The state of the freelance economy in the MENA

The Nabbesh team shared some information about the state of the freelance economy in the MENA. From a demand perspective, the vast majority of talent-seekers sought designers and other creative workers. Indeed, the Design & Creative vertical captured 41% of the volume on the Nabbesh site in 2014, a figure that represents a fairly stable proportion over 2013. The second largest area of skills demanded was made up of Business Services & Admin jobs – fully 23% of the total. Writing & Translation came in at 10% while Marketing, Software Development/Web, Videography/Photography, and Other each earned about 7%.

On the skills-available, or supply-side of things, the most frequently posted competencies focus on Graphic Design which accounts for 29% of the total. The second-most widely available set of skills, which comprise 20% of the total, relate to Software & Web Development, with Writing & Translation and Sales & Marketing coming in at 3rd place (10%). 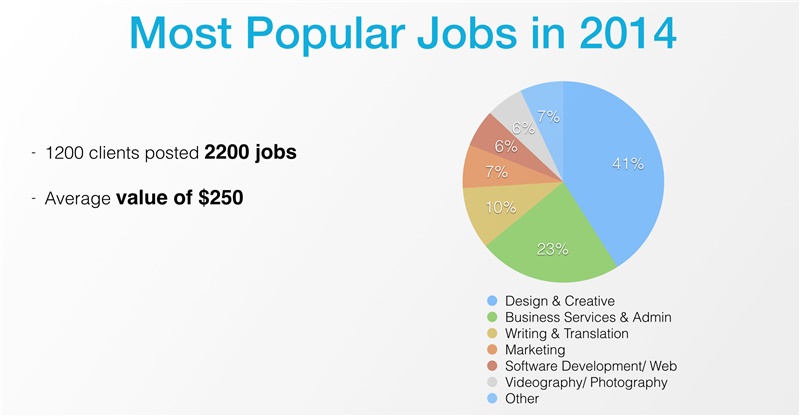 One of the most interesting findings in Nabbesh’s data is that 60% of freelancers on the site come from the UAE. Only 12% are from Lebanon while Egypt and Jordan each account for 5% each. Saudi Arabia only contributes 2.5% of the total.

But that finding also obscures the breadth of work relationships across the Arab region. In other words, registered jobseekers may not always find jobs but they overwhelmingly apply for them in other countries. For instance, the majority of applicants were Lebanese workers who sought to fulfill a posting from the UAE (nearly six thousand jobs). Egyptians also sought to work in the UAE – the second most popular relationship on the site (2,700 jobs). Finally, Lebanese firms were a target for many people in the UAE (2,100 jobs). You can see more of these relationships visualized in the graphic above. 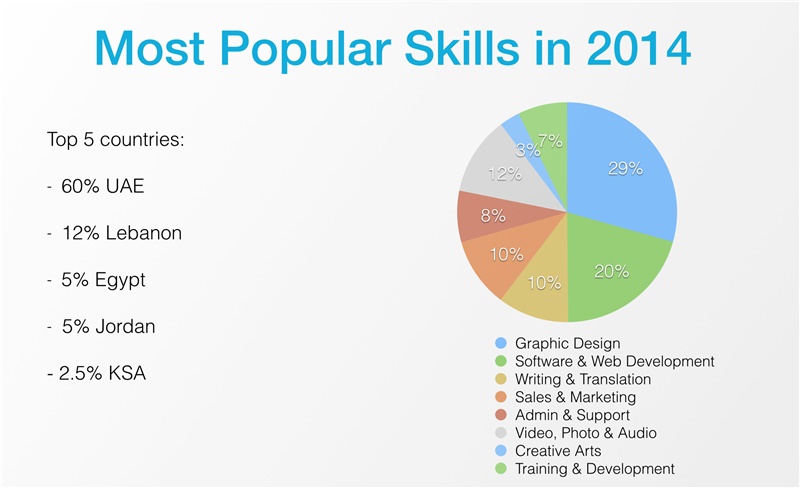 The last few insights that warrant attention go to the gender, education level, and ages of job seekers. Fully 32% of jobseekers on Nabbesh are women while 50% of users are between the ages of 25 and 34 (75% are between 18 and 34). But despite their youth, the typical Nabbesh user is highly educated, with 87% of them holding a college degree or better.

The user figures seem to confirm Khazen Baz’s assertion that “there's economic need for extra income in all parts of the Arab region. We have one of the lowest minimum wage standards in the world. So there is definitely an economic need for people to seek sources of income, especially women.”