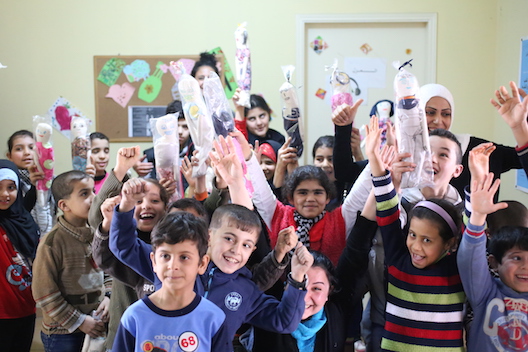 Big money isn’t an essential requirement to launch a successful startup. Just ask Dubai-based social entrepreneur Sahar Wahbeh (pictured below). The US-born, Lebanese-Palestinian – and founder of Dumyé – is living proof that you can build a successful brand on a budget.

“I gave up my branding consultancy to set up Dumyé with nothing more than a few thousand dollars [$8,000] and a whole lot of belief,” she tells Wamda. “To date we haven’t attempted to raise any money; however, success for Dumyé is defined by how much we can give. Our ability to empower communities is directly correlated to our financial growth.”

Now, the 34-year-old is in the running to win a major prize that can make a difference to so many more lives in the region, and beyond. And you have a chance to be part of this success story simply through the click of a button.

Launched in June 2013, Dumyé handcrafts personalized cloth dolls for children, where, for every doll purchased, another doll is donated to an orphan. The idea came about during Wahbeh’s search for a unique toy for her own daughter.

“I wanted to gift my daughter something really special for the holidays,” the founder explains. “Disappointed with what I found available in the market, I decided to create a doll of my own. [Soon enough] I realized the incredible opportunity, I had to use these dolls as a force for good.”

According to the latest figures by UNICEF, there are more than 132 million children orphaned around the world, of which, approximately 13 million have lost their families to war, preventable diseases or poverty.

Wahbeh continues: “For every Dumyé doll purchased, we gift a doll to an orphan, to make his or her own through an art workshop. This provides the children an opportunity to experience relief through creative expression.

“The simple act of creating a doll allows them to reflect upon themselves, process what they have been through and most importantly, control one piece of their world. The creative process is not only healing; it is liberating.”

Stating that although the “entry point for starting a small business in Dubai is challenging, because of the costs associated,” Wahbeh was adamant that it was “a leap of faith” she needed to take. In terms of the materials used, all of the blank dolls are created using fair trade organic cotton sourced from NGOs in India. 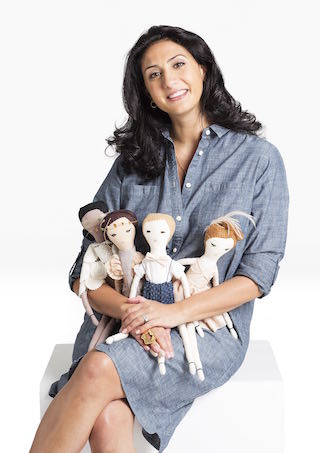 “This allows us to empower the women who make them, and in turn they use their proceeds to educate the next generation of girls,” she continues. “The dolls we sell are made by local craftswoman in the UAE.”

Despite the lack of external investment to date, Wahbeh says that Dumyé has already built a loyal following of customers in more than 15 countries across the globe, and as a result has gifted dolls to hundreds of orphans, mostly refugees.

Asked what her highlight has been so far, she mentions a series of workshops she held with 250 orphans in Lebanon recently.

“It was one of the most exciting and humbling moments of my life,” she says. “We had this one boy cover his doll in bullet holes. The volunteer working with him encouraged him to dress the doll, but he refused. He left the room but a few minutes later the same volunteer went after the boy to gently encourage him once again to let her help him make the doll clothing.

“Eventually he agreed and there was something really symbolic about his decision to dignify the wounded doll with clothing.”

Explaining that the “lack of human capital to support Dumyé’s vision” has been the most challenging aspect of the business so far, Wahbeh decided to try her luck at entering a brand new contest. Last October, she applied to The Venture, a global initiative aiming to find and support the most promising and aspiring social entrepreneurs: those with ideas that use enterprise and innovation as a force for good.

Despite tough competition from 1,000 entries from across five continents, Dumyé was selected to participate in the global final, scheduled for this July. Wahbeh, the only Middle Eastern contender, will join 16 other social enterprises from around the world – including Bulgaria’s Arthesis; Thailand’s Socialgiver and Vendedy from the United States – at a training-camp in Silicon Valley, California, during which the finalists will have to pitch for a portion of the $1 million in funding to take their business to the next level.

Wahbeh reveals that just being shortlisted has already opened a lot of doors for her business, saying: “Aside from the amazing profile The Venture has already given to Dumyé, I am receiving some phenomenal mentoring support from the GCC finalist-judging panel. It’s priceless.”

There’s no doubt that $1 million would make a huge difference to the growth of Dumyé, and while Wahbeh faces plenty of competition from some other impressive startups, 25 percent of the prize fund is in the hands of the public. Until June 14, they can vote online to help the startup of their choice win $250,000. The remaining $750,000 will be awarded by the judging panel in part or full to the successful finalist – or finalists.

“Winning The Venture would be transformative for Dumyé and all the people whose lives will benefit from our success,” she concludes. “Our business priorities at the moment are to hire a core team that can consistently support our vision. This would help us streamline our operation, expand our production capacity, and help us leverage economies of scale for the purchase of raw goods.

“The funding on the table will completely transform Dumyé’s ability to bring love and light to not only our children, but the children who have not been spoken for.”