When Mohammed Amleh left a well paid job in the loyalty card business, in San Francisco, to return to Palestine to launch a startup, people thought he was crazy.

Launched this year in Ramallah the Swipt application is a gamified mobile loyalty solution which allows small to medium sized businesses create their own customized programs.

Whereas traditional loyalty programs are concerned about how much you spend as a buyer, and will supply rewards when purchases are made, Amleh argues that in addition to purchasing, Swipt cares about the user experience, and maintaining a relationship between the customer and the merchant.

As an example, sharing activities on social media, liking the merchant’s page, and checking in, are all considered rewarded actions that would add points to your balance. After all, the goal is to create stronger engagement between the customer and the brand, Amleh says.

The merchants do not only benefit by creating a network of loyal customers but they get free marketing through customer social media activity, and most importantly they get in depth analytics.

Within four months the startup was able to reach just under 1,300 active users, and seven merchants including cafes, an ice-cream shop and a hair salon. 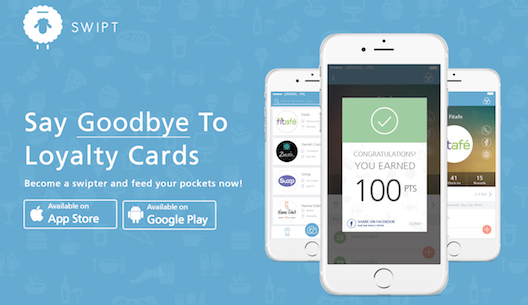 Soon to be launching in Jordan and Saudi Arabia, Swipt is available on iOS and Android.

Although it is uncommon that one would choose Ramallah over the US, Amleh says there are two main reasons for an entrepreneur to stay in a maturing Arab country, rather than base their businesses in an already developed and receptive environment:

Business is all about offering solutions. In a developing country you are surrounded by problems that need solutions.

If a young Arab entrepreneur decides to go to the US, Europe or even the UAE, where the ecosystem has already matured, there is a great chance that he or she would fail. As a foreigner you would get lost in the distortion and buzz of your numerous counterparts, in addition to the language and culture barriers you would have to deal with.

Amleh says that he came back to the Middle East “because the ecosystem is growing”. In other words, the region is still young and manageable, which makes it fertile and full of potential.

Amleh admits that the transition is difficult. “A lot of people were against it, including parents and friends. I didn’t find the support I wanted,” he says. “But once they started seeing that I’m serious and that I’m here to make a difference and create something new, they started appreciating.”

According to World Education Views and Reviews (WENR) 80 percent of Arab postgraduate students are leaving their home countries to study. Just over half of them – in particular, those from the North Africa region – do not return after graduation, causing estimated losses in revenue of more than $2 billion.

Such a huge financial loss cannot be understated or put aside, this kind of money is what would increase the quality of life of millions of impoverished Arabs, and create a breakthrough in Arab economy.