This is what Nidal Qanadilo, a coaching consultant for business accelerator Oasis500, says. It also takes more than simply understanding the fundamental process of running a business. It takes both.

“That hunger has to be there, but hunger alone isn’t enough,” says Qanadilo. “They need to combine hunger with the process.” 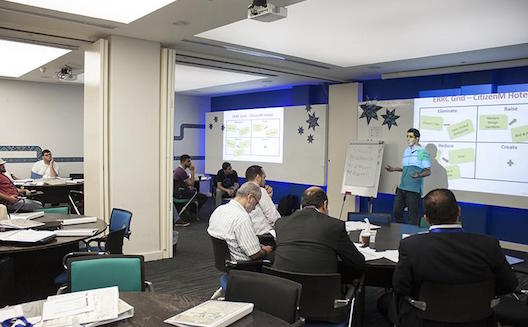 That’s what he says should be the major takeaway from the recently completed Oasis500 Tech and Hardware Workshop, at which he was a trainer.

The roughly 45 aspiring entrepreneurs who attended the workshop in Amman, Jordan provided the ideas and enthusiasm, and Oasis500 introduced them to the process.

The workshop was an intensive four-day event designed to prepare tech and hardware startup founders with the training necessary to transition their early-stage companies into growth-stage businesses - a major issue facing startups in MENA.

Spread across four days, from August 16-19, attendees gathered in a conference room at the accelerator’s campus, where they experienced a lineup of detailed seminars presented by Oasis500 trainers including Qanadilo, Mohammad Albattikhi, and Faisal Bitar, guest speeches from successful entrepreneurs, group exercises, and daily homework assignments.

Interspersed among the seminars were real-life examples of the workshop’s objectives, like a live pitch given by 3Dmena’s Loay Malahmeh, a local 3D-printing company making waves as an innovator in Jordan’s tech and hardware scene.

The first three days were dedicated mainly to a rigorous lineup of presentations and seminars, but on the final day Oasis500 trainers put attendees to the test.

Each startup was tasked with demonstrating that they’d gained the skills to effectively pitch to investors and secure funding for their products.

It was a live pitch session, with each startup in attendance given five minutes in front of a panel of Oasis500 judges.

During the pitches, everyone drew in close and the entrepreneur stood in front of a tightly packed semicircle of chairs, the lights dimmed. The spotlight was squarely on the presenter as the judges leaned back in the shadows to watch.

On display during the pitch sessions were a variety of entrepreneurs: bright-eyed beginners preparing to enter Jordan’s ecosystem, veteran businesses looking to acquire new skills, and founders from around MENA looking to enter the market.

There were bouts of jitters; some had to switch from speaking english to their native Arabic mid-pitch to do their product justice - others rocked nervously from foot to foot, unconscious of their movement.

Then there was CarPoolUP, a carpooling app developed by and aimed at local students needing transportation to Jordan’s universities - many of which are located away from urban centers and reliable public transportation.

Another was Magnoon Magazine, a multimedia startup focusing on comics and local artists.

Participants and trainers from Oasis500's Tech and Hardware workshop pose for a group photo. (Image via Samuel Wendel)

The judges weigh in

And in the end the judges were fair but honest, asking tough, critical questions - and offering invaluable advice.

They pointed out large issues like failing to adequately establish the market problem a product was solving, or noting when a problem was established but a solution not clearly defined.

They asked probing questions regarding revenue streams and cost forecasts to see if the presenters could prove on their feet that their valuations were accurate.

In short, the judges gave the entrepreneurs the chance to stumble and fail during a live pitch but without the consequences of a real-life pitch - and told them precisely where they needed to improve.

The end goal of the conference was to introduce this next wave of tech-talent to a comprehensive look at financials, revenue streams, business models, and - most importantly - the art of pitching to investors.

Or, as Qanadilo put it, understanding “the entrepreneurship process, what does it mean to convince an investor that the product they’re building is actually solving a real problem in the marketplace.”

But after all the pitches were done, group selfies taken, and business cards exchanged, Oasis500 released the workshop attendees back into the world - but not without one final task. The last thing listed on the workshop’s agenda? Another homework assignment: Prepare for your pitch. The real one.