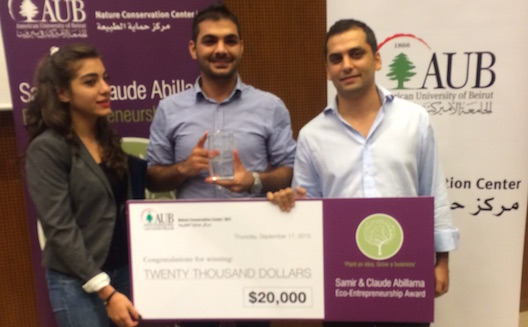 A car-pooling app developed by a team of four college grads won this year's $20,000 Samir and Claude Abillama Eco-Entrepreneurship Award, which promotes the role of entrepreneurship in nature conservation efforts.

tulos is a rewards-based carpooling app for university students that aims to reduce the number of cars on the road.

"We are creating a need to conserve the concept of carpooling, plus introducing the concept of sharing, which we lack in Arab societies," tulos cofounder Mohamad Nabaa told Wamda.

The concept is inspired from French ridesharing app BlaBlaCar, which Nabaa used during his stay in Belgium last year.

"I fell in love with the public transportation system of Europe. It was seamless to move around the city," he recalled. "I got to know about BlaBlaCar, and how students in Europe use it to move between cities, as we were all on budget control. I abused BlaBlaCar… like, moved around to Germany, Netherlands and France with complete strangers.”

Upon his return to Lebanon Nabaa, a computer science student, submitted tulos as his senior project in BAU (Beirut Arab University), where he was completing his undergraduate degree. One of his professors was so impressed with the project that he encouraged Nabaa to enter the North Lebanon Startup Weekend Competition. With the help of mentors, tulos won first place and $4,000.

Nabaa and his team had to take into account cultural differences when adding features to the app. For instance, passengers can choose the gender of the driver, although a mixed-gender option exists as well.

"Basically the design was to accommodate the social needs of the Arab communities," he said. "We are as you know conservative communities, thus the filtration according to gender came into place."

The app, currently under development for the iOS platform, is currently in beta. It has a live tracking system, email/identity validation system and a panic button.

"Messaging is done between passengers and drivers using push notifications. This allows to make a GPS lock and reservation for a carpool in 45 seconds," Nabaaa said.

But could it be awkward to get a ride from a stranger?

"A lot of people would be awkward, [like]: 'why should I share my car?' Well, apart from the environmental benefits, carpooling is a concept that should be used in countries that do not have a public transportation system," explained Nabaa. "To trigger that in students, you have to have a reward system."

"The twist with tulos is the more you carpool, the more you gain/lose points depending on if you were a passenger or a driver," said Nabaa. 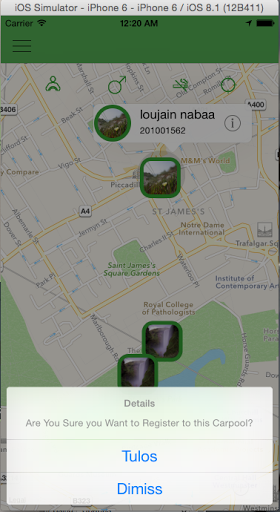 The cofounders, along with team members Ralph Khairallah, Basma Jilani and Lujain Nabaa, plan to launch in Lebanon. They polled 400 university students, and 80 percent said “they would like to carpool, but they presently do not".

“Basically its safety and social awkwardness towards asking for a ride,” Nabaa said.

The tulos team plans to expand the app’s user base beyond college campuses.

“Eventually any organization or firm will be able to use tulos,” Nabaa said. “Usually in companies, carpoolers have to register forms and sign papers, with tulos all it takes is your institution’s email.”

Nabaa and his team plan will use the prize money to further develop the application and launch at AUB.

“We have just joined Speed Accelerator Program as well,” Nabaa told Wamda. “So, with the [Eco-entrepreneurship] award and the funds from the accelerator, we will be ready as soon as our systems are tested fully.”

Fellow contestants and their projects: