Office design matters more than most entrepreneurs realise when it comes to employee performance, which is why the UK Lebanon Tech Hub made that a key feature of its Beirut premises.

"The first thing I learned at [university] was that design matters," said Lebanese architect and UK Tech Hub designer Hani Asfour. "Any space can become one for knowledge exchange, if designed correctly."

Roadie Tuner is one startup working from those offices. Cofounder Hassane Slaiby said one of the most important aspects of it for them was having a customizable space. 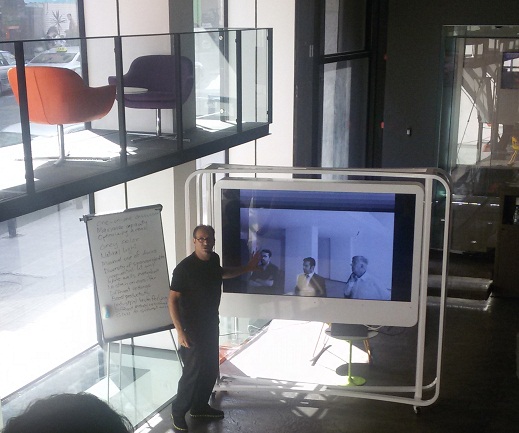 “We [initially] had a depot that used to be a warehouse for my mother. When she didn’t need it anymore, we took over and turned it into an electronic workshop. We added a dartboard, stencil, a tool wall...we made it ours,” he said.

The UK Tech Hub is a three-story working space with a glass frontier and sliding glass doors, with natural-effect lighting. It is compartmentalized by white and transparent walls that occupants use to write and brainstorm on, and all floors are connected by a marble staircase.

Asfour, speaking at a UK Tech Hub workshop 'The startup workplace: strategies for designing networked spaces' in September, said he’d used concepts that foster creativity, individuality, and efficiency within the workplace - qualities that have become the hallmark of desirable workplaces for entrepreneurs.

Asfour’s first concept is that of ‘group forming networks’, which he says office designs must facilitate as much as possible.

The idea is that groups of people, be they employees or entrepreneurs in a coworking space, exchange ideas. In turn those are exchanged with other groups creating a network of ideas that’s larger, both economically, and socially, than the sum of its parts.

“No more cubicles, no more pyramid-like structures, with the boss’s office overlooking the employees. These are outdated.”

The second is the idea of of increased mobility and personal autonomy within the office.

With the rise of the internet came the concept that people can work anywhere outside the office, such as in cafes or at home, but Asfour said people still prefered face-to-face time.

This is why coworking spaces need to mimic that idea of physical mobility and control over one’s surroundings that working in an unstructured place like a cafe brings. Concepts such as rotating chairs, separate meeting rooms, and optional desk-switching come in handy here.

“We used to switch desks every once in awhile in our [warehouse], to make it fun and versatile,” said Slaiby. “We didn't want them to feel that [we] are always watching and monitoring their performance.”

The third concept is that interaction between people is vital for knowledge exchange.

The UK Tech Hub's three-floor staircase is designed to optimise ‘knowledge capturing incidents’, and its transparent office walls are often used as writing boards for brainstorming and planning.

"Passages make good cases for knowledge exchange. Employees can bump into each other while going up and down the stairs, and tell their ideas. They can also sit on the stairs and chat. This is how we make tacit knowledge (knowledge in our heads) into explicit knowledge," Asfour said. 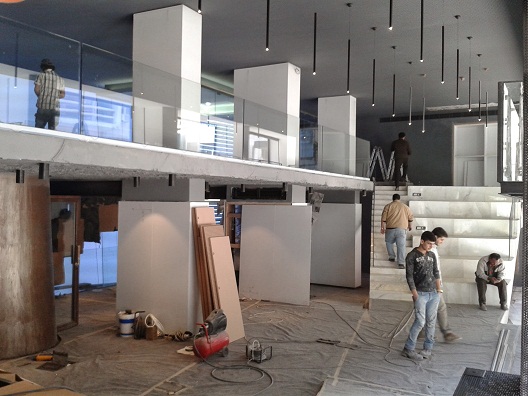 The Hub under construction. (Image via Polypod)

Using the above concepts, any startup or organization can design a space which encourages creativity and a sense of personal freedom for those using it.

Asfour himself has some thoughts on what to do, and what not to do, when designing your own space.

Separating management from employees reflected a separation of cultural identity, something that was contradictory to today’s culture-oriented startups, Asfour said.

"Don’t start with the organizational chart, with an office for the big cheese and little cubicles for the team. It doesn’t work that way anymore. No one wants to see the boss having a bigger space than anyone else, those days are gone," he said.

But the decision to use a flat management structure come from the top: managers set an example of the behavior they wish to have in the company. "The boss (founder) sits with the team, no offices, no assistants. It boosts creativity and productivity. It also boosts your ego and identity."

Marwan Salem, founder of Slidr and currently sited in the UK Tech Hub offices, has tried to ensure they’ve stayed as far from the traditional ‘pyramid’ management structure as possible, which is one reason why the UK Tech Hub layout suits them.

"We try to be as flat as possible as a company. We like to interact with people and we're quite loud. Also, we don't have titles on our business cards, just our names."

"Again, this has to be top-down in a flat organization. If employees see the manager doing it, they are encouraged to do the same," said Asfour.

For Salem’s team, naps and breaks are “a given” for the team members, where performance and efficiency matter more than working hours. Slaiby and Jalgha also agree on this point.

“If someone is tired, it’s a given that they go and lie down, we don’t even ask about it,” Salem agreed with Slaiby. “What matters is productivity, and they are all very hard workers, and they deliver.”

"We have game time, and we're flexible," said Slaiby when asked about Roadie Tuner’s "game-time". "We play a lot of music, and we jam sometimes out of nowhere. It's true we're building a business with a product, but at the end of the day, we're a music company. We like to keep that in our culture."

Naps are also important for the members of Roadie Tuner. "We have a couch in our other [startup place], and it's perfectly normal for people to use it," said Slaiby. "You can't focus if you're feeling tired and burnout. We understand that"

3. Reach out to the community

"Don't create the ‘ocean-liner’," Asfour said. "Don't be so self-sufficient that you turn your back to the city. Engage the outside world."

Good examples of how to include the outside world into a coworking or networked space for entrepreneurs are corporate discount rates for gyms and restaurants. 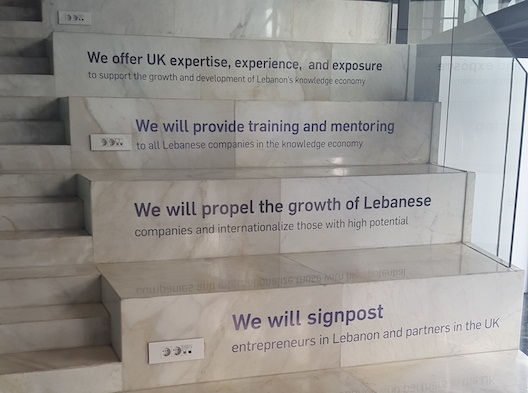 The Hub's staircase is a platform connecting all three floors of the accelerator. (Image via Polypod)

4. You don’t need a logo in your space

"The space itself is your brand, it should reflect your value, your attributes, who you are. I'm personally opposed to logos."

One example of that concept is Roadie Tuner's private startup space. "We have musical instruments hung on the walls, because they represent us," Bassam Jalgha, cofounder of Roadie Tuner said. "We don't need a logo."