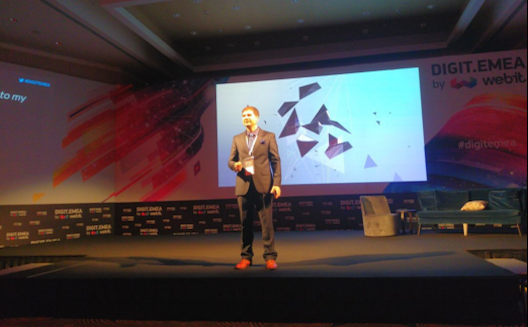 The Webit DIGIT EMEA conference rolled into Istanbul on November 18 amidst hype and excitement.

The two-day digital and tech event was held in the luxurious surroundings of the Marriott Hotel Sisli and brought together some of the leading national and global executives in the digital industry alongside investors and start-up entrepreneurs.

From big data management to gamification and artificial intelligence

The main conference hall saw keynote speeches from luminaries of the digital and media industries, including Oracle’s Reggie Bradford, the President of the Economist Group’s global media businesses Paul Rossi, as well as Scot Keith from Vancouver-based advertising agency and design collective 123w.

The speeches provided a glimpse of current trends and developments in mobile data, outlined the main challenges in big data management and for traditional advertisers, and described how this multibillion industry looks to transform itself.

Opportunity was given on the main stage to a number of creative serial entrepreneurs such as EIC’s Gabe Zichermann whose views on gamification (game mechanics in non-entertainment platforms) and the Generation Z was entertaining and thought provoking. For example, he cited Domino Pizza’s ‘Pizza Hero’ app, which is designed to draw in gamers whilst providing a wealth of marketable information on them.

Another notable presentation was on the subject of artificial intelligence by Scott Cohen, of the Orchard

Announcing in his opening line that “in the future you will all be cyborgs” certainly seemed a bit far fetched, but Lahiani sought to back up his prediction by reminding the audience of the important steps already taken in the medical world in this area.

That his presentation was also accompanied by graphical imagery of people with microchip implants no less helped to conceptualize his point. 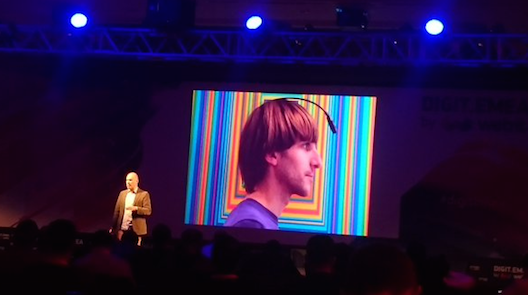 Scott Cohen, of the Orchard, talking about AI. (Image via @exxaminer)

About the only downside to what was a highly informative and entertaining event was the unexpected absence of several other keynote speakers.

Their non-attendance was put down to the disruption of air travel in light of the tragic events in Paris earlier in the week.

Previously, Istanbul had hosted the Global Webit Congress for three years straight. The decision to downsize it to a regional event was taken in light of the uncertain political situation here at the time. (Turkey held national parliamentary elections on November 1 amidst heightened security concerns.)

However, Plamen Russev, the host and chairman of Webit Foundation, put a positive spin on the development, reasoning that “holding a smaller format event made it more personal and provided an excellent opportunity for networking.”

He was keen to point out the sheer number of investors – both local and international, c-level executives and startup exhibitions that had come together and promised a similar experience for those attending follow up events in Dubai (February 3 2016), Sofia, Mumbai and Singapore.

With a rejigged format, there were a considerable presence of both local and regional start-ups, entrepreneurs and investors.

Turkish startups alone accounted for roughly 20 percent of those that qualified to give two minute pitches to a select panel of experienced investors, during a competition that ran concurrently to the main talks.

This was a positive development given the notable absence of local talent at similar events at Startup Istanbul 2015 and Webrazzi Summit 2015, both of which were held earlier this year.

When highlighting this, several investors pointed to the comparatively high caliber of talented and ambitious university graduates in Turkey with science and IT backgrounds.

Dr. Recep Bildik, a director with the stock exchange company Borsa Istanbul, asserted that “the Turkish tech startup industry is comparatively small against other markets,” but that it had grown rapidly in the last three to four years…”partly because of crucial government supported financial assistance programs to budding entrepreneurs.”

The timing of the event also happened to coincide with some talk in the US about the current state of health of tech startups.

Specifically, some private investors have expressed concerns about the accuracy of recent valuations of companies defined as unicorns – tech startups valued at over $1bn.

Whilst the financial figures being discussed about some Silicon Valley-based firms such as the mobile payments platform Square are extraordinary, it has prompted some analysts to speculate that the amount of private investment by established institutional investors currently being splashed about might soon be on the decline.

According to seasoned tech entrepreneur and angel investor Aurore Belfrage, "there will be corrections that mean that the value of some companies will go down but that does not necessarily mean a failure of the market or for the companies concerned."

Furthermore, it was argued that corrections to the US market are unlikely to have any real detrimental effect on fledging emerging tech centers in the region.

In Belfrage’s opinion, they’re completely separate ecosystems and little to no change is needed to to protect these regional markets.

Indeed, she argued that "investors looking for a good market to pioneer should come to the Middle East. There is a huge level of talent and ambition not only in Istanbul, but in Beirut, Amman, Dubai and in Cairo… and there is a lot you can do with your capital if you’re smart and willing to work."