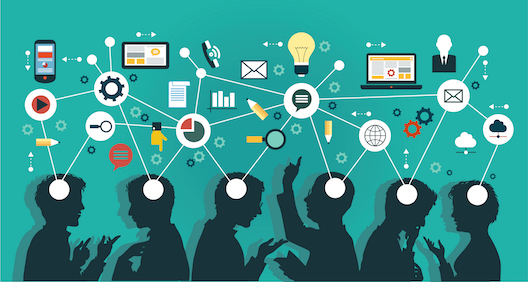 A visual reprensentation of the concept that could transform the Middle East and North Africa. (Image via Meridian-180.org)

In ascertaining the future of viable technology businesses in the Middle East and North Africa, we can find a roadmap to success within the confines of our collective history.

For hundreds of years, people living in small communities across MENA region have pooled whatever savings and capital they may have had and made those resources available to their constituent members in the form of short and long-term debt.

To this day, hundreds of thousands of small communities clustered around the workplace, family units and other collectives provide much needed short and long-term debt solutions to members of their communities, throughout the Levant, referred to as 'al jamyeah'. With less than 14 percent of MENA adults having access to banking services, this form of lending continues to be sustained by an acute need for financial services that the banking sector and other financial institutions have ignored.

But, while many might expect technology’s impact in the creation of new modes of exchange, it’s actually in its ability to allow millions to access these new ways of working that will transform this region.

For instance, fintech businesses such as Lending Club effectively expand the informal al jamyeah business model and integrate technology to scale the practice to an unprecedented global level. In countries with large informal segments and underserved and underdeveloped banking segments, the impact of fintech in its different forms is likely to allow millions to enter and increase their participation in capital markets.

Something similar is happening in the transportation sector. With service taxis dating back to the 1950s, the concept of ridesharing is not new to MENA. Uber and other rideshare apps allow for the masses to participate in this marketplace as suppliers, and connect potential customers directly to the supply. Like Uber, the ability to localize this business model has brought immeasurable success to regional companies such as Careem.

Again, the critical impact of technology here is its ability to accelerate, distribute and open these business models for wide adoption on the demand and supply side. The leveling effects of technology and connectivity allow individuals to participate in these marketplaces, democratizing the process on both sides.

This de facto liberalization of the labor market has the promise of expanding its participation and rendering it incorruptible – the algorithms that power these marketplaces are immune to the nepotism that has plagued the region for so long.

The promise and power of technology is in this scaling effect, where existing modalities are adapted and expanded for the digital age.

The MENA region is on the precipice of a critical transformation. Where the immediate impacts of the last major economic inflection points - the industrial and agricultural revolutions - bypassed the region, the impending digital revolution in the form of the sharing economy, aided by the incredible growth mobile based connectivity, will arrive with immediate and far reaching implications, and the promise of unlocking a wave of growth and development the region has not seen in centuries.

Sharing economy business models will enable individuals to bypass the cycle of dependence upon which so many of our regional economies are predicated upon. The public sector in MENA employs 50 percent to  80 percent of the workforce, far above the 5 percent to 28 percent in the OECD. Similarly, public and oil and gas sectors contribute between 50 percent to  60 percent of GDP. Unfortunately current fiscal and demographic realities render this form government-led economic growth unsustainable in the medium to long term.

The  promise of technology means that the individual will no longer turn to the state for income, financial security and prosperity.

Instead, he or she will look inwards and use the many tools available to unlock value within their personal asset base and build individualized sources of income. Previously unmonetized assets such as home, car, time and skills will be transformed into personalized revenue streams with the potential to lift millions out of poverty and return agency to the individual.