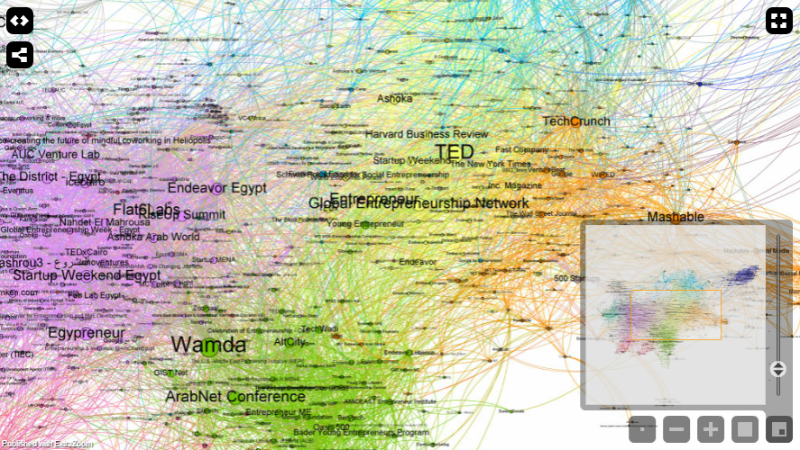 The map links all of the players in the Cairo ecosystem. (Images via Istebdaa Consulting)

This is an edited crosspost from LinkedIn.

The ‘entrepreneurship ecosystem’ is used extensively to describe the network connecting everyone in the Egyptian startup scene.

I find the concept of ‘ecosystem’ is sometimes overused and quite vague, which challenged my curiosity to dig for some insights.

By definition, an ecosystem is ‘a biological community of interacting organisms and their physical environment’. Therefore, we should analyze not only the main actors of the network but also its structure, as each is affecting the other. Such analysis was made possible by using the social network analysis (SNA) methodology on data extracted from Facebook.

Who likes who the most

I started with the Rise Up Summit fan page, given its wide reputation and also the connections it has with many stakeholders of the ecosystem.

I extracted data about the pages the Rise Up page likes, and the pages these other pages like (constructing a two-degree network). Together, they formed a network of more than 1,300 pages and around 8,500 directed likes.

Click on the map above for a larger version. 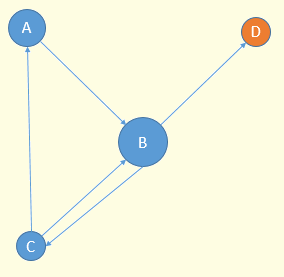 Finally, the color of the node depends on the cluster to which it belongs identified by some graph algorithms.

By visualizing the linkages of the Facebook pages  of the organizations in the ecosystem (startups, support organizations, media, etcetera) based on SNA algorithms, I came up with these preliminary insights.

1. Success is not only defined by local standards

The SNA shows that the Egyptian ecosystem is highly connected to international sources of information (TechCrunch, Mashable, Wired and others) and regional ones (Wamda, Baraka Bits, etcetera).

Despite the good quality of a couple of national Arabic news portals for entrepreneurs (Preneur-masr.com and AhramTech, for example), they are not yet well linked to the rest of the ecosystem.

Consequently, Egyptian entrepreneurs find themselves benchmarked against competitors outside the national market who are not necessarily responding to the needs and opportunities of the Egyptian market. This explains the position of some businesses in the map responding to hyperlocal needs such as Bey2ollak, Diwan Bookstore, NileTaxi, but are linked to national players in the ecosystem who grab the attention of regional and international markets, such as InstaBug, Integreight and PushBot. See the GIF below to compare the position of these six startups and the intensity of their interconnections.

2. Connections: importance of quality ‘connectors’ to reach beyond Cairo

In SNA, one of the most interesting parameters is called ‘betweenness’.

Betweenness is an index to measure how frequently an entity is in the most direct route between two other entities in the network. In our context, this index shows which entities are acting as ‘bridges’ between the peripheral networks and the central cluster of study, the Rise Up Summit Facebook page.

Among the entities high on the betweenness index, there are many non-profit organizations such as Injaz Egypt, Endeavor Egypt, Enpact, and Ashoka Arab World; coworking spaces such as Al Maqarr Coworking Space, The District, and Ice Cairo; governmental Institutions TIEC and Bedaya Center; as well as university support mechanisms including AUC Venture Lab, IEEE, AIESEC and the Enactus chapters all over Egyptian universities.

Each of these communities has a large number of affiliates, with some being more sector-focused than others like the below cluster surrounding TIEC.

Despite the potential of innovation and entrepreneurship all over Egypt, most of the connections the mapping was able to capture are happening between a large number of Cairo-based incubators, accelerators, and other support organizations.

Based on the experience I gained from my ground work with Yomken.com, I believe student activities and coworking spaces can uncover hidden gems in regions that are far from Cairo’s buzz. They have the necessary energy and on-ground connections to lead a lot of innovative projects, notably in the non-tech fields such as agribusiness and fisheries, water treatment, renewable energy, waste management, furniture and textiles, and creative industries.

A promising example of such customized programs is the recent Nawart support program for renewable energy entrepreneurship.

In order to put an order of magnitude of the relative importance of players in the ‘ecosystem’, I compared how the fans are distributed among the Facebook pages on the ecosystem and the average betweenness of each page category.

Surprisingly, community organizations, followed by public figures, NGOs and government organizations have the highest effectiveness when playing the role of ‘trust builders’.

However, by taking into account the average number of fans per page of these entities, only public figures combine high potential for mobilizing entrepreneurs with linking different parts of the ecosystem together. These people include Omar Samra, Dr. Farouk El Baz, and Muna Abusulayman (from Saudi Arabia). 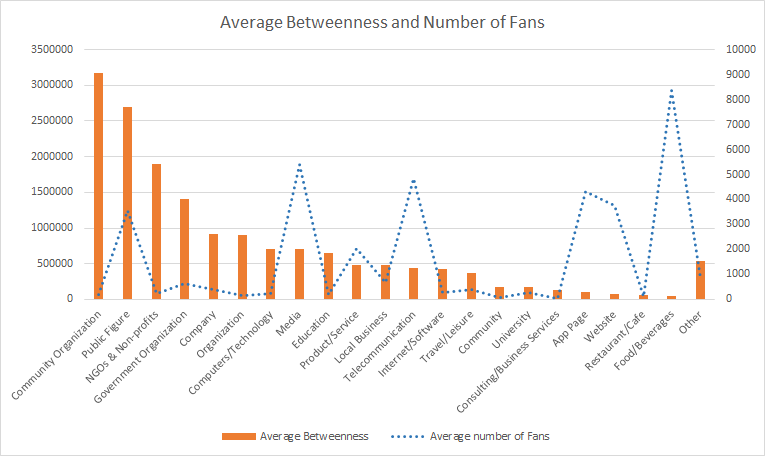 In the same line of thought, there are not enough backward links between large companies and local startups. This limits the nation’s absorptive capacity from any imported technologies used by foreign firms.

For example, despite the enormous number of fans of Pepsi’s page, it has very few connections with the rest of the ecosystem (with a betweenness centrality of around 65), and most of the connections are through event sponsorship. There’s no obvious collaboration with startups in the sector. The same is witnessed in the telecommunication sector.

There has been a lot of effort made to build the ecosystem and it is time to reach out towards a local model of entrepreneurship, which should include components such as using these channels to build long-lasting trust with others in the ecosystem.