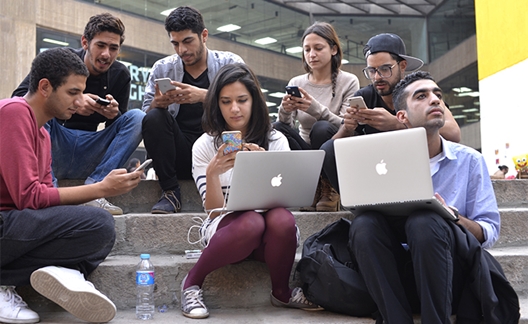 Internet and smartphone growth, especially among youth, play a big role in the flourishing of the video industry. (Images via Cairoscene)

Globally the number of people who watch traditional television - that is, programming provided by networks - has fallen off a cliff since online streaming became user-friendly.

This has spurred media networks to find try to ways to keep viewers engaged, and offering unique online media, known as over-the-top (OTT) content, capitalizes on rising online viewer numbers by keeping the audience engaged for longer, on multiple platforms.

MENA is expected to see a strong increase in internet traffic over the next few years, creating a growing need for Arabic video content.

All of these increases in online usage provide new entry points for video content streaming across the region.

Importantly, a report by BroadcastPro Middle East said that in 2015 an average of 54 percent of Arab consumers in the UAE, KSA, Egypt, Lebanon, Qatar and Morocco paid for online content - largely driven by smartphone platforms. 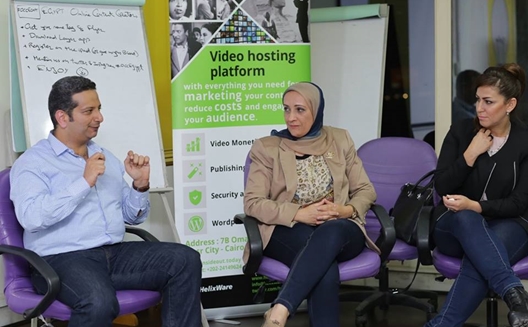 (From the left) Fadi Ramzy, Egyptian TV host Deena Abdul Kareem, and Misr International University head of the Mass Communications Amany Bassiouny speaking at a panel about the future of video content in the region. (Image via Helixware)

Challenges in the sector

Despite the rising use of video content in MENA, dodgy internet connections in part of the region as well as copyrighting of digital content remain the two largest challenges faced by the region’s video sector.

Internet and smartphone growth, especially among youth, play a big role in the flourishing of the video industry.

In an age where ads are still the main form of monetization for content publishers, video makers are eagerly awaiting video hosting platforms that support advertising.

There are several Arabic video hosting platforms that have been successful in meeting the challenges of the sector, in attracting strong audiences, and in implementing ad campaigns.

Perhaps the most prominent of these platforms is Shahid.mbc.net, which publishes content from the MBC channel, along with its Shahid Plus platform.

Platforms for paid visual content have diversified to include subscription television and exclusive TV channels dedicated to sports and other programs, such as Utrack.tv.

Others include OSN and BeIN networks, with the latter recently announcing a plan to launch a new channel for movies, having perfected its sporting events model. In the meantime, video-on-demand portal Netflix is now available everywhere in the Middle East except Syria, in Arabic, for a subscription fee of $8-12 a month. Starz is also available in 17 Arab countries. 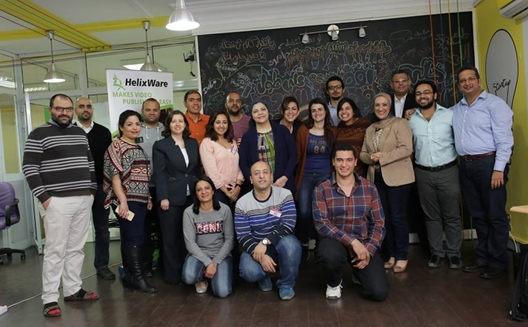 A video content meetup in Cairo in March, organized by Helixware at Injaz. (Images via Helixware)

During an Injaz Egypt event in March, Ramzy explained that successful video platforms gave publishers control over their content.

“What distinguishes hosting platforms from YouTube is that they give the publisher the option of targeting their videos to a specific sector, as well as maintaining control over the ads and how to make profits,” he said. “They are also not under Google’s authority of shutting down any pages for any reason, and the viewer isn’t distracted by any other content appearing by other publishers [on the screen].”

Over the past few years, Ramzy has secured partnerships with global oil company Total to host training videos for its employees, and with Italian electricity and gas company Enel for marketing. The Helixware team also has a partnership with the International Press Office of the Kuwaiti Ministry of Media, to livestream their TV broadcasts.

Ramzy is currently gearing up for the launch of his ‘Shoof Cairo’ (See Cairo) app on Android, which is an extension of Helixware. The app user can publish videos that include time and place they were shot to show off the city.

“We’re currently seeking to raise the first round of investment in the region, starting with Saudi Arabia,” Ramzy told Wamda, adding that his rivals “didn’t see the light until investors decided to pump money in a sector that they believe will be part of the future”.

He believes the activity only proves his thesis that Arabic video content is one of the hottest sectors in the region today.