Accelerators have become a “rite of passage” for entrepreneurs around the world, and a report on the state of global programs shows just how 'early stage' the Middle East is in comparison.

The Global Accelerator Report 2015, released on Tuesday, found that 12 accelerators in the Middle East, North Africa and Turkey (it did not include Maghreb countries) invested just over $3.5 million in 126 startups since the sector began to really emerge three years ago.

The spread: although the report is not a complete survey of all public and private accelerators in MENAT it gives an idea of who and what is happening in the region. (Images via Rachel Williamson)

The global business accelerator report surveyed 387 accelerators in North America, Europe, Latin America, MENAT and Asia and was developed by funding software platform Gust and its accelerator platform Fundacity. The first report was for 2014, but did not include MENAT.

Total investment globally from the surveyed accelerators in 2015 was just under $192 million and, predictably, accelerators in the US and Canada ranked highest in terms of investment, spending $90 million. Europe followed at a distant second with $41 million.

Compared the other four regions surveyed, MENAT ranks last in terms of investment, the number of accelerators, and exits in 2015.

Middle Eastern accelerators also differ from global norms in their sectoral watch-lists for the coming year.

Globally, startups involved in Internet of Things (IOT), big data, software-as-a-service (SaaS) and fintech are favored. Locally, as seen below, accelerators are watching slightly different sectors: startups making mobile apps are still popular and health, usually a tough sell anywhere in the world, is on the radar.

Percentage of accelerators reporting an interest in these sectors over the next 12 months.

Middle Eastern accelerators are slightly different to their peers around the world as well.

“Non-profit accelerators are very prominent in the region,” the report said. And as all MENAT inhabitants know only too well, “the launches of new accelerator programs only started showing significant growth after 2013”, well after other regions around the world.

Given the nascent nature of the regional ecosystem, funding these vehicles hasn’t been easy.

Most follow the ‘cash for equity’ model, pioneered by Y Combinator in 2005, but only 15 percent and 38 percent rely on exits for short and long term revenue, respectively. This kind of early stage investment in an early stage ecosystem negates an early exit, as the startups need time to grow, so other forms of revenue have taken its place including corporate partnerships or membership fees.

Many accelerators rely on corporate sponsorship for short-term revenue, the report found, but as the sector is growing there is a shift towards a more “diversified” business model.

Of the accelerators surveyed, 47 percent said corporate partnerships were an important source of short term revenue, but they were less likely to monetize in-house events such as workshops or mentorship than those in other regions. 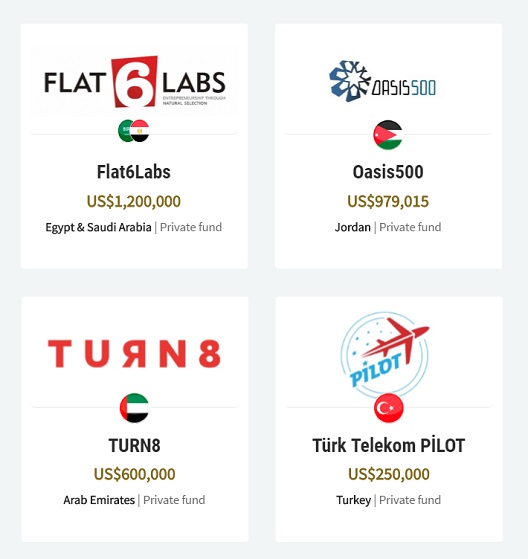 The 12 accelerators surveyed from the region were from seven major and minor hubs in MENAT.

According to the report the UAE's in5 Innovation Centre and Turn8 accelerated 70 and 20 startups respectively in 2015. In Lebanon the UK Lebanon Tech Hub and Speed BDD supported 45 and six startups each.

Flat6labs in Egypt and Saudi Arabia supported 44, Oasis500 in Jordan launched 26 startups, and Gaza Sky Geeks helped - but did not invest in - five.

Given the late arrival of the accelerator industry in the region, MENAT's lag behind the rest of the world may suggest at the ground it has to make up and point to lessons it may be able to draw from more mature systems.